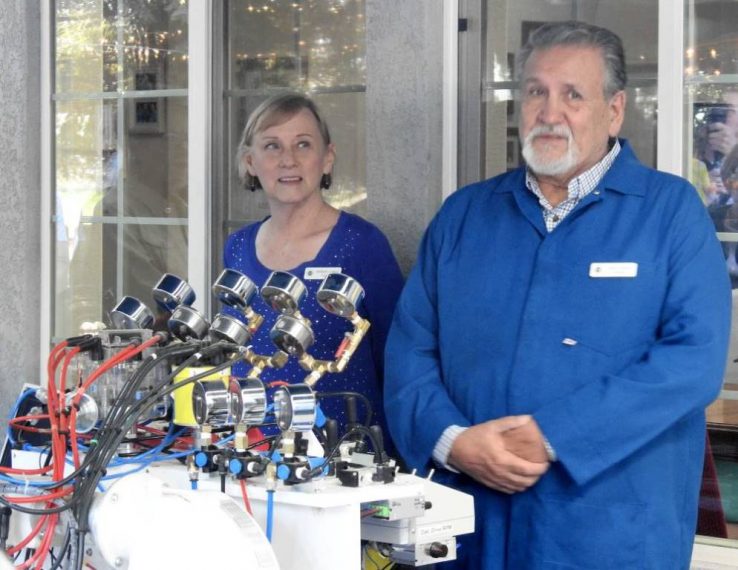 Debbie and Dan Caris with a working prototype of the CarisMatic Generator. 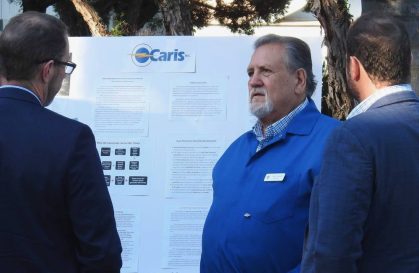 Dan Caris, at right, explains the process before firing up the CarisMatic Generator. 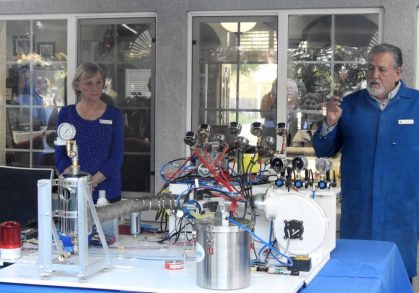 Dan Caris speaks with special guests about the potential of his new machine. 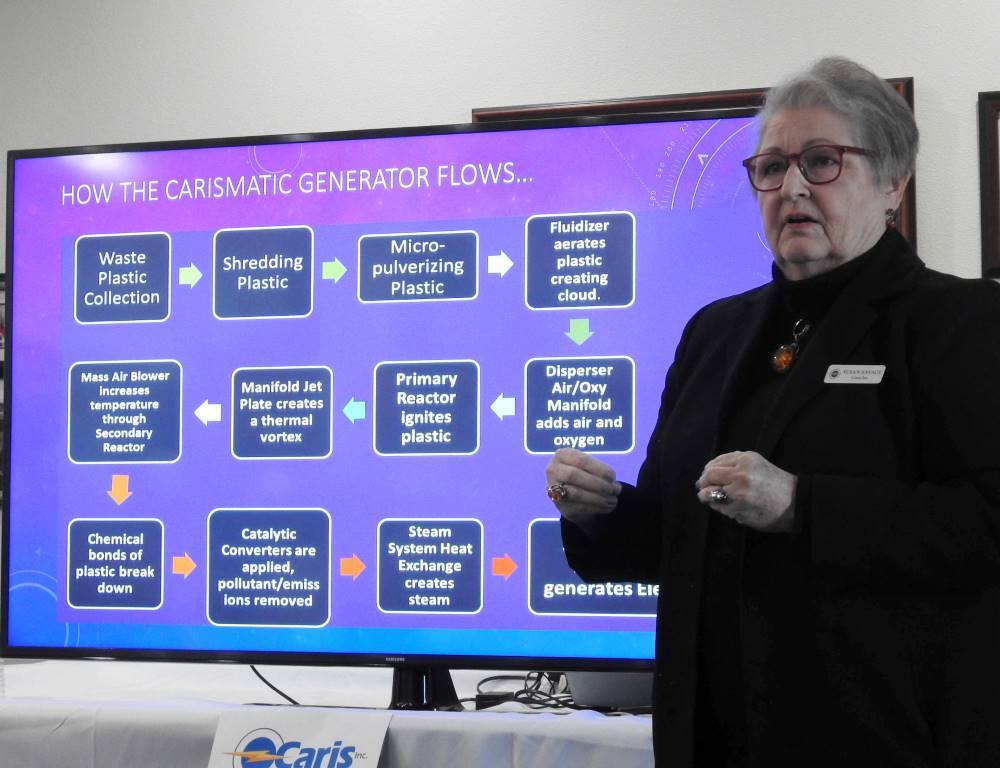 Longtime Merced resident and inventor, Dan Caris, revealed to an assembly of local supporters on March 17, the first working prototype of a device promising to deliver emission-free electricity to industries, homes, and electric vehicles, while ridding the planet of one of its worst headaches — plastic waste.

CEO Dan Caris explained, “There are eight to ten separate systems comprising the generator. Now that we have the patents, we can confidently unveil how it works.”

The invitation-only presentation was staged at the home of Julie Garber in Merced. Ms. Garber is Caris Inc.’s Director of Investment Stewardship.

Described as an “electrochemical, thermal, and mechanical system,” the machine creates a cloud of pulverized plastic heated to thousands of degrees in a ceramic chamber, which is then delivered to a heat-exchange unit, where it creates steam to spin a turbine that creates the electricity.

Meanwhile, the super-heated plastic is stripped down to a molecular level, where it combines chemically with a converter, similar to a system used in a vehicle’s exhaust, which eliminates most toxic emissions.

Caris Inc. VP Susan Savage made the Power-Point presentation to approximately 50 people attending the late afternoon event. She illustrated the unique features of the CarisMatic Generator. “Its only source of fuel is plastic waste, unlike any other power system in use today.” According to Ms. Savage, “The machine consumes all types, or numbers of plastic, dirty or clean.”

The fuel is pulverized and combined in a proprietary pellet mixture. A separate division of the company, Caris Fuel, is charged with producing the patented plastic formula mix.

Ms. Savage pointed to the largest accumulation of plastic waste in the world, the Pacific Gyre, a floating island of pollution in the Pacific Ocean, now estimated to be twice the area of Texas that extends down close to the ocean’s bottom.

“Efforts have been made,” says Caris, “to clean up the Gyre, but the small amount salvaged is simply deposited in landfills, where it eventually makes its way back to sea again.”

According to information from the National Geographic Society provided by Caris, 18 billion tons of assorted plastics end up in the world’s oceans every year.

It is plain to see that plastic waste and how to dispose of it has grown into a major environmental problem. Because it resists decomposition, the substance has worked its way into every ecosystem on the planet. It cannot safely be burned because of the resulting toxic fumes.

Up steps the CarisMatic Generator.

“Plastics!” The one word Mr. McGuire needed Ben to hear in the 1967 film The Graduate. “There’s a great future in Plastics!”

Little did we realize that more than a half century later our planet would be suffocating in the substance.

Caris’ patented machine is set to help with that. The plastic fuel to run the generator is everywhere, and it’s basically cost-free.

Caris Inc. has set up another division, non-profit Caris Cares, in a move to accept all plastic waste from non-profits and environmentalists who now gather it. Caris Cares would re-sell the waste to their parent corporation, and use the earnings to fund distribution of the CarisMatic Generator to places suffering emergency power outages, to help power low income housing, and to provide needy third-world areas with an affordable source of power.

The CarisMatic Generator would be sized smaller than a household refrigerator, at about the cost of a home’s standard HVAC system.

Ms. Savage said, “It will be manufactured in such a way that it can be piggy-backed onto similar units for larger industrial installations.”

Also planned, a smaller unit about the size of a shoebox, to power electric vehicles — thus eliminating the need for expensive batteries, with the added benefit of minimizing further pollution from the mining of the rare-earth materials those batteries require.

As displayed, the first working prototype of the generator looked like a ‘Steampunk’ device from the H.G. Wells era. Caris, with partner Debbie Caris standing by, demonstrated to the gathering how waste plastic could turn on an electric light. While wearing a light blue lab coat and monitoring the prototype’s several gauges, Caris twisted dials and flipped switches, then pointed to sparks issuing from the ceramic chamber. He allowed that the final product would be somewhat modified to utilize miniaturized digital controls, and make use of modular construction. Its various systems would be monitored by computer. Should any problem occur, it would immediately be pinpointed and remedied. Thus, the machine’s reliability would be insured.

Caris spent 10 years researching and developing his unique generator, only to have the introduction of the prototype inadvertently fall behind schedule. “While initially set to be unveiled in 2021,” according to Ms. Savage, “The project had to be delayed since one of the vendors Caris Inc. works with to supply the machine’s ceramic heat chamber could not deliver because 60 percent of their employees were out with Covid.”

Now, with life ostensibly returning to normal, manufacturing of the generator will get back on track. According to a March 17, 2022 press release, manufacturing of the CarisMatic Generator is set to begin in late 2023. From there, Caris believes it may take a while, but with enough of these generators making clean power and eating up this plague of plastic debris, we may be able to eventually reduce many forms of pollution and reclaim a healthier environment.

Mike Biddison is a Times contributor and local author. Read about his latest novel, Dell’s Leap, online at: redmistgirl.com.