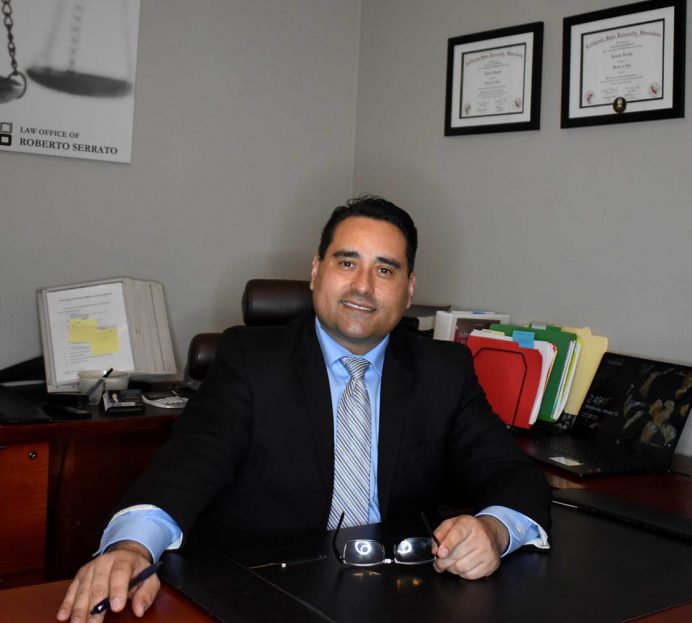 Roberto Serrato, an immigration attorney based in Atwater. 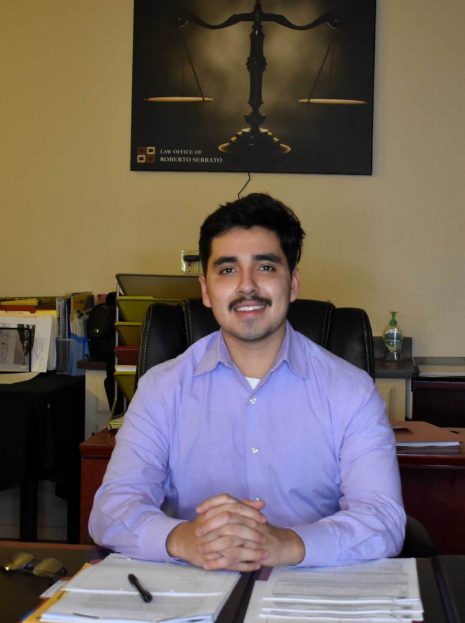 Joel Rodriguez, a UC Merced student who is working on local immigration matters.

Special To The Times

Attorney Roberto Serrato believes an estimated 20,000 to 30,000 undocumented immigrants in Merced County are poised to benefit from the Biden-Harris administration that was installed this week.

The reason is fairly simple. President Joe Biden is expected to reverse many of the immigration rules and regulations set up by the Trump administration over the past four years.

Serrato, with an office in Atwater, is the only immigration attorney serving his constituency full time in Merced County. He is cheered by the anticipated return to a new U.S. immigration policy. He sees his job becoming a lot more predictable in relation to the half-dozen or so state and national agencies charged with handling individual immigration cases within their jurisdiction.

Four national agencies are charged with U.S. immigration control. One agency reviews cases before the Department of Justice and the others are part of the Department of Homeland Security. The majority of the DHS petitions and applications are scrutinized by U.S. Citizenship and Immigration Services, or USCIS. That’s where much of the paperwork is generated.

Serrato has noticed that over the past four years of the Trump administration, forms have tripled in length, with instructions for filling the forms often even longer. This extra complexity becomes a barrier for those applying for green cards, citizenships, DACA (Delayed Action for Childhood Arrivals) eligibility, legal asylum, student and employment visas, or simple protection against arrest and removal by ICE (Immigration and Customs Enforcement).

The many changes wrought in the past four years have also impacted the agencies involved, he says. The increased workload taxes their ability to respond efficiently, drawing out the processing procedures so that costs go up, while the system bogs down.

USCIS is undergoing funding shortages and a high employee turnover because of what Serrato terms “arbitrary and capricious changes” initiated by Trump. As a result of the high turnover, according to Serrato, Trump filled vacancies with immigration judges and ICE attorneys who had no experience in the field, hence without realistic expectations about the job.

“All this helped slow the system down,” states Serrato.

The agency’s leadership has also been in flux. Acting USCIS Director Ken Cuccinelli, a former Virginia Attorney General, served close to six months after being appointed in June, 2019, as part of Trump’s “get tough on immigration” policies. Cuccinelli then resigned the post to become the Deputy Secretary of DHS, only to return to head USCIS a short time later — without resigning the DHS position. In March of 2020, a federal judge ruled his appointment unlawful, which negated many of his hardline directives, one of which critically shortened the length of time asylum-seekers had to prepare for official interviews.

USCIS, ICE and CBP (Border Patrol) are all part of DHS. Chad Wolf, the acting head of the department, resigned earlier this month, explaining it was due to the “meritless court rulings” against him. He had been appointed Acting Secretary in November, 2019, and a year later his appointment was also ruled unlawful by federal judges, as was his predecessor Kevin McAleenan. The ruling had the effect of blocking many of his punitive immigration policies, including Visa fee hikes and the suspension of the DACA program. That program originated in the Obama administration as a stop-gap measure to protect immigrants from deportation who arrived in the United States as children. The DHS has not had a Senate approved secretary since April, 2019, when Kirstjen Nielsen vacated the office. She is known for the Migrant Protection Protocols, effectively keeping migrant asylum applicants in Mexico.

Dr. Serrato, as his student assistant, Joel Rodríguez, refers to him, provides services to immigrants in 23 areas of immigration law. “The only laws more complex than immigration law in this country are the tax laws,” states Serrato. With Rodríguez’s help, the office handles the needs of an average half dozen clients a day, not counting numerous phone calls. Services range from correctly filling out complex forms for DACA and citizenship applications, to petitioning state and federal authorities, and handling Visa applications through the Department of State and appropriate embassies.

An average case file that Serrato scooped from his desk, measured over 6 inches thick. He said the I-130 form, used to petition the government to allow family members to come into the country legally, has grown from a 3 page document to 12 pages of tiny type. Those forms and others dealing with defense against removal by ICE, are automatically invalid if sections that do not apply to a particular case are left blank.

The instructions for these forms are normally more complex than the forms themselves, insuring that only a trained professional can navigate them properly, at great cost to the petitioner. Serrato’s legal service costs range into the thousands of dollars, though he says he charges much less than other Immigration Attorneys around the state, and unlike many others, he allows clients to pay over time.

“Regulations that used to take four to five months to negotiate, now take years,” states Serrato. “Trump kept adding more hurdles with tweets — immigration law has been under attack by executive order like never before.” He explains that “When you do an executive order for something so complex as immigration law, you’re bound to have problems.”

Serrato’s assistant, Rodríguez, is in his junior year at UC Merced, and working with Serrato is right up his alley. Before attending UC Merced, he worked as a community organizer in San Jose. While at UCM, he founded the Scholars for Justice Program, raising funds for the indigent and homeless, children of poverty-stricken families, and others in need of help.

Biden, according to Serrato, will bring stability to the immigration situation, if not immediate change. In some areas the change will be dramatic. The DACA program, under continual fire from Trump and his acting appointees, will be solidified by executive order, which is how it originated. The Dream Act, legislation proposed in 2001 but never enacted, would put immigrant minors who demonstrate responsibility and accountability on the road to permanent residency. It will be re-introduced to the legislature under Biden.

Biden has also promised to abolish the Migrant Protection Protocols, which keep an estimated 25,000 asylum seekers waiting in camps along the border in Mexico. Although with such large numbers, immigration advocates say, the new president has to be careful not to open the floodgates too quickly.

Biden has also pledged to roll back Trump’s broadening of the Public Charge Rule, that has had the effect of allowing only higher income immigrants access to visas and green cards. He will renew Temporary Protected Status, designed to help people fleeing persecution, war or natural disaster. He has also pledged to devise a path to citizenship for those individuals and families of good character who are among the 11 million undocumented who have been living and working in the United States, some for 20 to 30 years.

Serrato also sees a sign of hope in Biden’s nomination for Secretary of DHS, Cuban American Alejandro Mayorkas. Mayorkas served under President Obama as the USCIS Director who instituted the DACA program, and according to Serrato, already knows the ins and outs of DHS.

Serrato himself is a former immigrant from Michoacán, Mexico, who became a U.S. citizen in 1997. He graduated from Hughson High School, went on to college, received a PHD in Education, then on to law school, taught school for a while, and has been doing immigration law for three years. He can be heard on a weekly radio talk show every Saturday over Merced’s Radio Lobo. He is married with a daughter in school and a wife who teaches second grade classes at John Muir School in Merced.

Hope. That’s the word Serrato uses. He says, “People are grabbing onto this hope” that’s being touted with the Biden administration. Change will take time, he says, but these people now have hope.

“The stars are aligning for better days for more humane regulations and rules, for what America stands for — justice, fairness, equity. …we’re a country of immigrants — that’s how we’re known. When people are allowed to live more freely, that’s going to impact the community in more than financial ways. When you give these people hope and take that fear away, it lifts this cloud and allows people to dream a little more … to buy homes, to become more a part of the infrastructure of our community. If it happens, these people are not going to be part of the fringes any more. They’re not going to be taken advantage of anymore. They’ll be able to help out their kids in the schooling system. And they’ll feel more like they’re Americans.”

Mike Biddison is a Times contributor and local author. You can find out more about his literary works online at: redmistgirl.com.