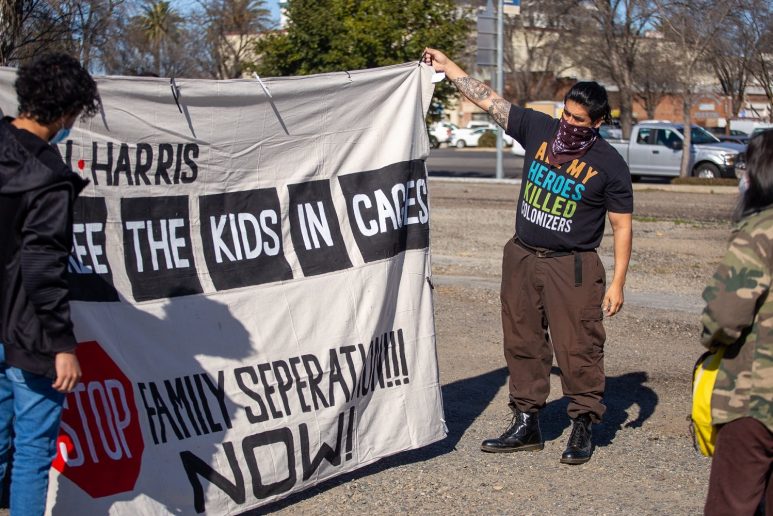 Merced City Councilor and local Brown Beret Unit cofounder Jesse Ornelas stands with residents as they unfurl their banner for the first time on Wednesday. 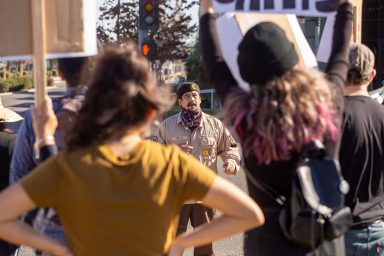 Residents attending the event held up signs as speakers made their way to the front of the crowd. 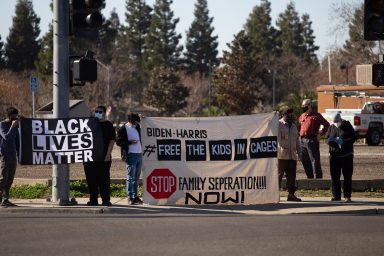 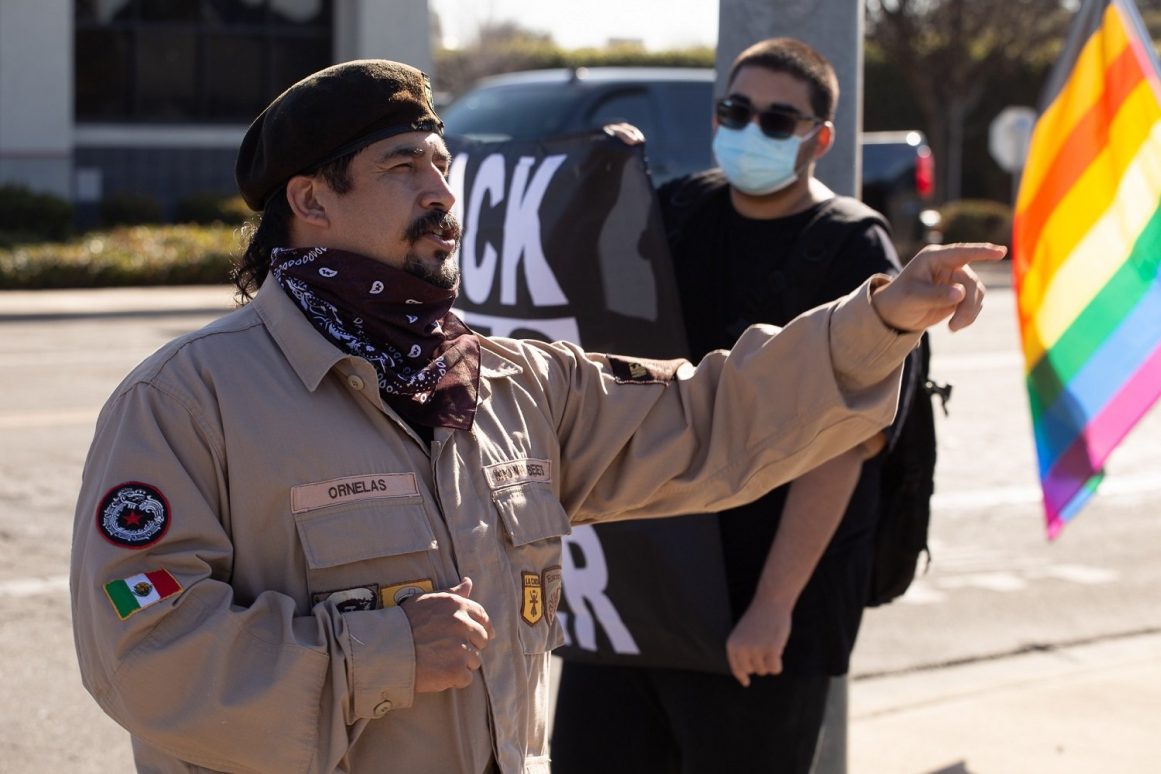 Jesse Ornelas speaks to those in attendance during the Inauguration Day demonstration.

Jesse Ornelas, who serves on the Merced City Council and also as a local Brown Beret activist, led a march and demonstration with a group of residents last Wednesday in downtown Merced to call for action on U.S. immigration issues.

The day’s events also marked the inauguration of Joe Biden as the 46th president of the United States, and Kamala Harris as the first female vice president.

Brown Beret organizations are calling on the incoming administration to take quick action in order to reunite children with their migrant family members following reported separations after detainments on the U.S.-Mexico border.

“We feel that just because there is a Democrat in office, that doesn’t mean it’s all right to have migrant babies separated from their parents or caregivers at the border,” Ornelas said. “Wrong is wrong no matter what political party is running the country.”

Ornelas said he hopes to see Mercedians from all walks of life reach out to Congressman Jim Costa, and continue to pursue justice for those family members who were reportedly separated from one another. “I would like residents, especially registered Democrats, to hold the Biden administration accountable and demand the release of migrant children. I urge local residents to reach out to Congressman Costa and have him relay the message to Joe Biden that it is no longer OK to use the immigration issue as a campaign talking point and not deliver on their promises.”

As part of the event, the Brown Berets brought together a list of demands that aim to impact the first 100 days of the incoming administration’s time in office.

Among the stated demands is that within “the first six weeks, the Biden administration must free the detained children from all ICE detention centers and facilities operating with a federal ICE contract; provide asylum to all indigenous children in bondage from U.S. immigration policies; offer a comprehensive COVID relief plan for everyone inside the ICE detention centers or centers with a federal ICE contract; terminate and defund all plans, investments, and construction of the border wall(s); within two weeks reconnect all detained indigenous minors with their parents, guardians, or caregivers, including the children that have been reported missing from the system for the last four years; publish a written report and disclose all activities that happened inside the ICE detention camps, centers, or facilities operating with a federal ICE contract.”

In regards to the idea of “open borders,” Ornelas explained that he sees migration as a human right, saying it is “A practice that our ancestors have utilized for way before the invasion of the Americas by the mass murderer known as Columbus. The countries of origin that the migrants are fleeing from are in crisis because of some of the foreign polices of the U.S. and other super powers. U.S capitalism is a root cause of immigration.”

To the Biden Administration,

On January 20, 2021, Joseph Robinette Biden Jr., will be crowned the 46th president of the United States of America.

Since the inception of the Declaration of Independence, the protection, respect, and mere existence of indiegnious peoples to this continent has been ignored and disregarded. Countless treaties have been broken, equal protections to the indigenoius peoples of the Americas have been denied, war crimes as well as human rights violations have continuously transpired on US soil. It is with this history in mind that we demand that the Biden Administration act immediately via Executive Orders provided to the President under Article II of the U.S. Constitution.

It is customary for every incoming president to establish a 100 day plan. The plan is an outline of the urgent and most pressing issues our Citizens are concerned about. As an act of good faith, integrity, and commitment to fulfill a campaign promise, we the people are holding the incoming presidential administration accountable and responsible for the immediate release of all children and families indigenous to the Americas from the Immigration and Customs Enforcement system.

We, the Brown Berets, have set forth key points in a list of demands rooted in the human rights of our indigenous migrant relatives.

We seek justice for those who cannot seek it for themselves. The year two thousand and twenty one is going to start off by freeing our brothers and sisters across the border and within from the political bondage. and Let’s dare to imagine another world, because it is possible.

County moves to consolidate permitting into one department

Supervisor Espinoza on state’s emergency response: ‘We all want equality’

Long lines continue to form for vaccinations at Civic Center