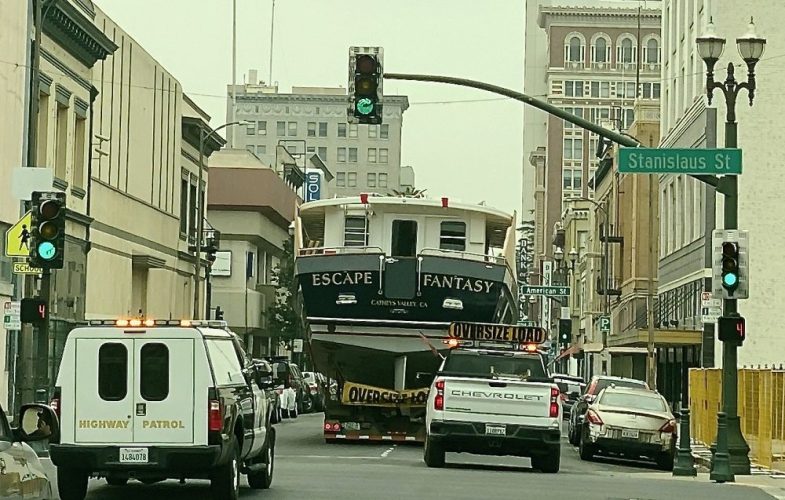 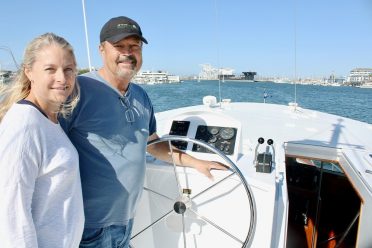 Steve and Karen Hansen at the helm of their dream yacht ‘Escape Fantasy.’ 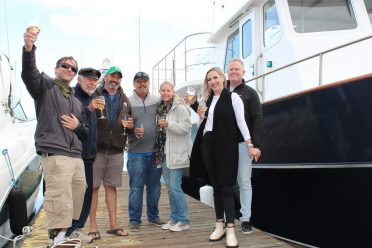 The party begins after the yacht is officially christened. 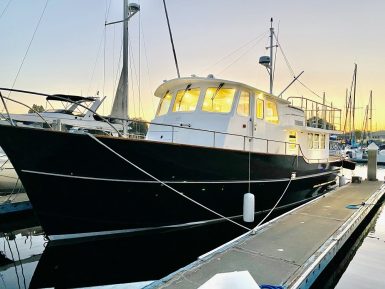 ‘Escape Fantasy’ docked at dusk in the marina. 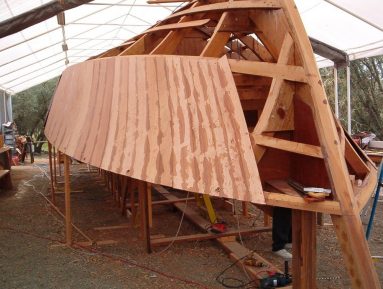 Planking under way in Catheys Valley. 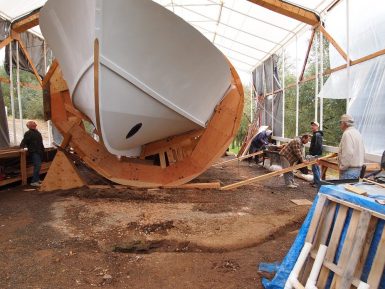 The yacht as it nears completion in Catheys Valley. 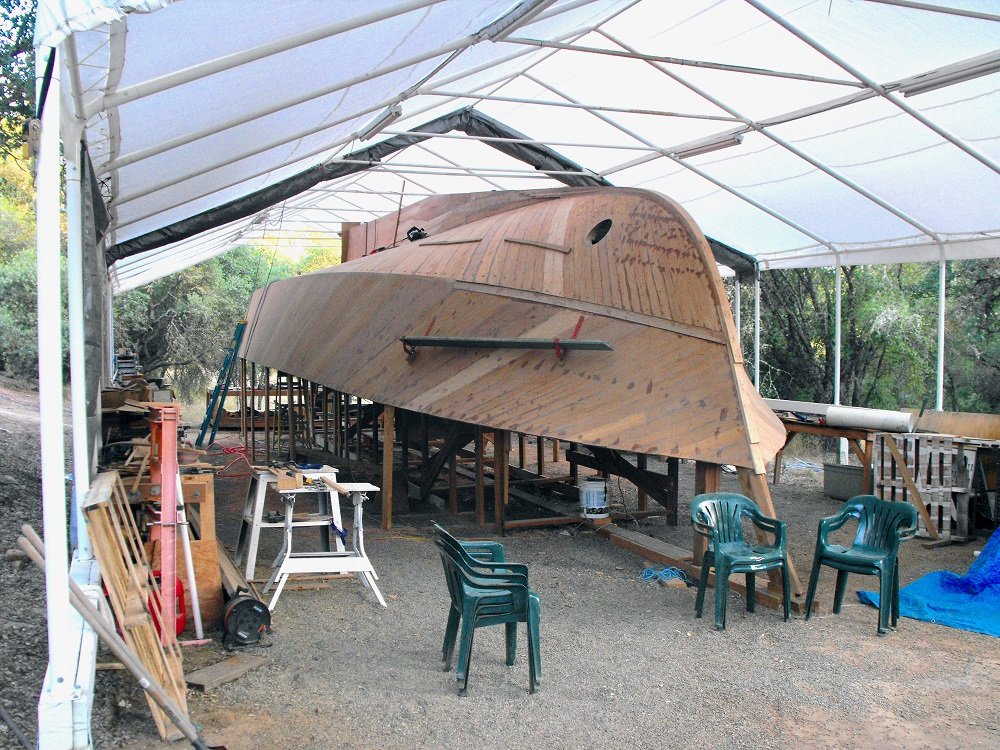 The yacht as it nears completion in Catheys Valley.

Every family has its challenges; however, it is hard to find a family like the Hansens of Atwater who took 14 years to build a 49-foot yacht.

Fleet Week was held in San Francisco recently and that special day was picked as the perfect opportunity to have the boat called “Escape Fantasy” officially christened.

Literally thousands of work hours were spent building the wood-hulled yacht by Steve Hansen and his wife and soulmate Karen in Catheys Valley. Many local residents known them as the co-owners and operators of the El Portal Imaging Center in Merced

Just to get an idea of how long the actual launching took, authorization for the transport process lasted six months and involved multiple permits, as well as the services of a crane and two transport companies to move the boat from Cathy’s Valley to Stockton where it was put in the water.

A licensed captain named John Curry of Stem To Stern Boat Services in Alameda has been with the boat since it was launched for sea trials, and he is training the Hansens in docking and general procedures.

The trip during Fleet Week was the most exciting so far, as the day was spent negotiating crowded boat traffic on San Francisco Bay.

Onboard were Steve and Karen, plus Steve’s son John and his new wife, Inessa. This writer and another sailor joined the cruise which lasted until it was dark and the yacht was brought back to dock at Marina Village in Alameda.

The yacht completed its trials with flying colors. The champagne christening took place at the dock in front of Sam’s Anchor Cafe in Tiburon, where the party stopped for dinner at the end of the day.

Where did the idea come from to take on such a project?

Steve is not your usual man as it comes to his upbringing. His father was a mechanically-skilled Air Force pilot who had involved his son in a homebuilt aircraft project in the 1980s. Later, Steve bought and flew a Cessna plane. He loved the adventure of taking on a project.

Karen, who is a Diagnostic Medical Sonographer working for the family business in Merced, said: “He didn’t ask. He just started the project one day, and that was it. But we were both involved in setting up the early framing, and my dad helped level the building site in the foothills with his tractor.”

The whole family was along for the ride and what a ride it would be.

The cost? Well, there is an old saying: “A boat is like a hole that you just keeping pouring more money into.”

Steve credits the help of woodworking artists, Sven and Gus Larsen, Merced building contractors who were able to spend significant time on the project.

The yacht project attracted other dreamers with talent as well, including an accomplished young metal fabricator, Travis Baumann of Catheys Valley, who built every metal item on the boat from tanks to masts.

Catheys Valley — where else would a person build a boat in the mountains so far from any sea? The hull was started upside down. Layers of marine grade mahogany plywood were laid precisely on sawn Philippine mahogany frames in a process called cold molding. Thousands of bronze screws and marine grade epoxy held the diagonal strips of plywood to the frames to conform to the hull shape. Even in the summer, the mountain air made it workable. For Steve, it was a way to get rid of the stresses of the job. Karen understood his passion and was by his side while raising a son too in a safe environment.

Steve confesses there were moments of self doubt, but says that completing each phase brought satisfaction along with new problems to solve, as well as an opportunity to talk to a lot of knowledgeable and friendly people who helped along the way.

Life had its ups and downs as the two engines were purchased. The company which made the engines stopped production mid-project, but that did not matter. The main engine was actually originally a tractor engine and parts were available from John Deere. A smaller engine was from Japan and used in case the big engine should fail, so they would be able to bring the boat back to a dock.

Five years ago, this writer actually saw the project and could only shake his head. The yacht was far from complete and odds were the yacht would never be completed.

Thanks to the Internet and some hard work, the parts and skills necessary to finish the project kept falling into place. Steve sought out people who had special talents to do special jobs on the Yacht. There is something about boat lovers, they seek out boat projects from near and far.

It was as if Steve was like Noah building his ark — only with no animals. And there was no rain to flood the land and bring the boat to the sea.

It was a total surprise when Karen called this news reporter — a sailor by heart — to announce: “Our boat has been launched.”

A formal champagne christening was set up for Alameda during Fleet Week, and all parties met at the boat along with the owners, family members and the captain. This was a yacht to behold in its wood brightwork, navy blue hull, and white topsides. It was one of the larger boats in the marina with three stories and two helms — one on the top deck and one inside for rough weather.

The yacht was so big that it was a tight-fit in the slip. The captain carefully backed the boat out of that slip and negotiated a tight turn to head out the Oakland Estuary for the trip to the open bay. At 8 knots, it would take over an hour to reach the open water of San Francisco Bay, and then it headed for the City Front and around Alcatraz.

There were hundreds of smaller boats and some very large naval vessels in the bay to celebrate the traditional Fleet Week. Because of security concerns all the law enforcement agencies were on hand with their own boats. The Coast Guard, the San Francisco Police and the San Francisco Sheriff’s Department and the Navy. All felt they needed to be on hand.

The day was brilliant as Escape Fantasy headed for the Golden Gate Bridge which was standing guard at the entrance of the bay. The water was choppy and rough, and the big yacht bounced around — at one time throwing waves over the stern and getting people wet.

No matter, this was part of the test, and that was how the boat would do in really rough water. It did fine. Like all test runs, the yacht had some issues, but they were little things such as certain dials not working, but nothing major. The yacht preformed as it was intended and handled the rough water with ease.

There were military plane flybys overhead as the guests on the yacht craned their heads, but it was not until late afternoon when the Blue Angels did their high-speed jet maneuvers that things hit a high mark. The sound was deafening.

One pass after another with high speed aerobatics. The pilots who flew these planes were the “Top Guns,” the very best that the Navy could find.

Once the show was over, the captain headed for Tiburon, where a dinner was waiting on the deck of the local landmark, Sam’s Anchor Cafe.

As the sun was sinking, the crowd met at the bow of the yacht to formally christen the ship. The champagne was not broken over the bow as per tradition because there was a fear that some environmentalist might complain that the alcohol was making the fish drunk!

However, those present enjoyed a bottle of Mums which had been waiting on ice.

It was the grand finale of a grand day, and the completion of 14 years work.