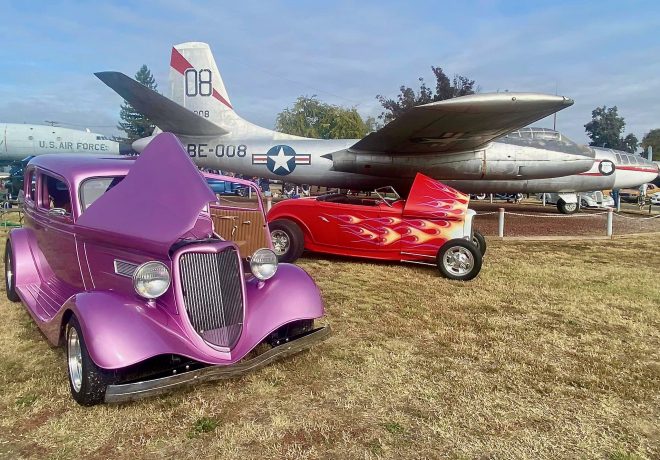 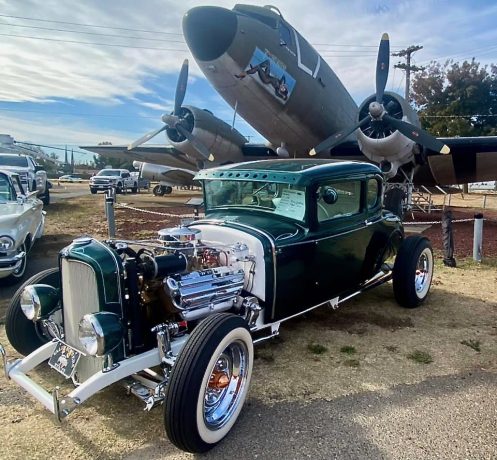 Most old car shows don’t bomb out and that certainly wasn’t the case on Nov. 5 at the Castle Air Museum.

Not surprisingly the show was themed “Bombs Away” and nearly 240 vintage vehicles were parked under the wings of military aircraft at the museum. Ideal weather and a good-sized crowd made the day even more special.

With that many old cars and trucks it’s not unusual that many of them were first-time sightings for me.

The show was coordinated by a number of hardworking Valley Vintage Car Club members, with Ed Chambers heading up the preparation effort.

My personal “best of show” would have been a jet-black 1958 Mercury Turnpike Cruiser two-door hardtop. This Space Age cruiser even had gold-colored trim for its badges and an out-of-this-world persona.

In no particular order, a bunch of other cars caught my eye. It may have been plain white but a 1958 Oldsmobile 88 two-door hardtop was as fancy as they get. There was an all-white 1968 Chevrolet Camaro showing off its frisky street machine vibe, including bumpers painted to match.

A black-colored 1950 Studebaker Champion “turret top” hardtop was looking spiffy, much like the jade-colored bullet-nose Studie that I learned to drive in 58 years ago. Another favorite car of mine was nearby, a 1968 AMC Javelin SST in bright orange.

Especially these days old cars don’t have to be finished to enjoy the fun, A 1955 Pontiac Chieftain four-door sedan desperately needed its yellow-orange paint freshened up but it was sporting a modern Vortech 6000 engine with its contemporary injection cowling.

Lots of folks were directing admiring glances at a 1952 Buick Super woody estate wagon. It had dual carburetors perched next to the Fireball Dyna Flash inline eight-cylinder engine. The nicely finished wood trim on the sides lends even more elegance to the overall package.

I always enjoy seeing old cars and trucks with race car performance engines. A 1941 Willys all-steel pickup would have you turning your hearing aids off with its guttural roar. It had shiny metal bomber seats which would not be comfortable over the long haul even if they appear cool sitting still. The primered Willys came in with a 1955 Chevy two-door sedan painted in primer black and also sporting big tires, a roll cage and a mighty mean motor.

Oldsmobile Cutlass hardtops and sedans from the late 1960s and early 1970s also stood out at Bombs Away. A 1971 Cutlass convertible in bright yellow caught my eye as did a 1970 Cutlass Supreme droptop painted in orange. A 1968 Olds Cutlass 4-4-2 two-door hardtop, the first year for that body style, looked great and had plenty of power under the hood. These Oldsmobiles could be ordered with all sorts of luxury features, along with considerable go power.

A dark blue 1962 Chevrolet Nova two-door hardtop was looking good. The same could be said for a 1959 Ford four-door sedan in black and red, showing off its mild custom, shaved trim vibe and lowered stance.

Thanks to the Cadillac Kings car club in Fresno, a caravan of supremely cool 1965 and 1966 Cadillac Coupe de Ville two-door hardtops were sitting low and suave on the museum grounds. Parked a little ways away was a bright red 1966 Cadillac convertible, slammed to the ground thanks to its hydraulic suspension.

Another memory-jogger for me was a 1941 Chevrolet four-door sedan, painted in purple with the factory-stock sun visor, large whitewall tires and a Desert brand canvas water cooler bag hanging off the front bumper.

A 1955 Ford Thunderbird roadster in turquoise with graphite-colored bumpers had a unique twist. It had a modern Ford Coyote V-8 motor to move it along effortlessly.

I was also drawn to 1956 Chevrolet 210 two-door sedans such as one in brown and cream colors. In the same area was a red and white 1955 Chevrolet two-door sedan, this one sporting a modern LS engine.

Car shows draw vehicles of all descriptions and a 1965 Austin Healy Sprite roadster was representing the sports car crowd. Another of my favorite vehicles at Bombs Away was a cream-colored 1963 Rambler Country Classic four-door station wagon, complete with a surfboard on the roof.

You don’t often see 1946 Hudson pickup trucks on the road. The Castle show had a nicely restored one with a cranberry red paint job. Also not spotted very often was a 1939 Pontiac street rod coupe with a modern turquoise metallic paint job.

Mid-1960s and 1970s Chevrolet pickup trucks are very popular these days and there were a number of them on the grounds. I was drawn to a 1967 Chevrolet truck in a copper metallic hue that certainly didn’t come from the factory that way.

Several Chrysler Corp. muscle cars were on hand. A 1970 Dodge Dart two-door hardtop was red with a black vinyl top. Its V-8 engine was dressed with all sorts of chromed goodies.

The People’s Choice vote at the show went to a 1956 Chevrolet Nomad station wagon.

One of my favorite strategies at the end of car shows is to sit near the exit to see and hear the vehicles leaving. Quite a number of them have engines with ample power, including a Shelby Cobra roadster with big block power.

This likely is the last big car show for the year around here. The Saturday gathering under the bombers certainly was fun for someone who can’t get enough old cars to check out.

It Was A Blast! Locals celebrate Fourth of July at Atwater fireworks show