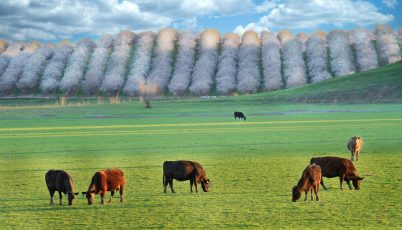 ‘Blossoms and Beef’ by photographer Jim Cunningham is one of the images in the exhibit ‘Land and Water’ at the courthouse museum. 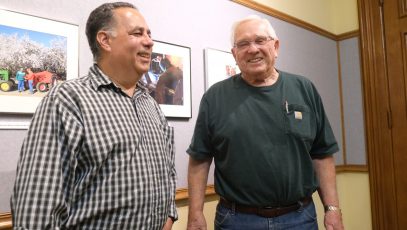 Doug Torres and Jim Cunningham are among the photographers behind the new exhibit ‘Land and Water’ at the Courthouse Museum in Merced. 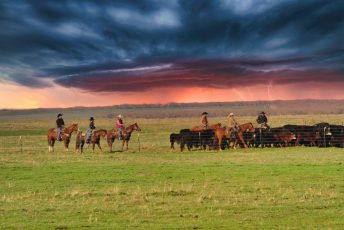 ‘Ahead of The Storm’

A new exhibit is showcasing the work of local photographers who went out into the field – literally – to capture the world of Merced County’s agricultural industry.

“Land and Water: The Building of an Ag Empire” opens this Thursday at 5 p.m. inside the Merced County Courthouse Museum. It’s a modern look at a part of valley life that has been around for more than a century, depicted through the lens of eight photographers from the local Merced Camera Club.

The photos reveal daily life in the fields, orchards and ranches of Merced County: ominous shots of cowboys ahead of a storm at Cunningham Ranch, wide angle snaps of cantaloupe pickers in Los Banos, and bird’s eye views of corn being harvested by titanic machines for silage.

The photos were captured on the ground as well as by air, via camera drone. MCC president and photographer Doug Torres was struck by the sheer size of the farming equipment, which he had never seen before. Especially interesting was the carrot picker, which scoops up the carrots by their stem, whacks the dirt off and then cuts off the stem before throwing them into a big wagon.

Torres is originally from New Jersey while his photography buddy during the project, Jim Cunningham, is a long-time rancher in the area. Cunningham’s knowledge of the industry and his local connections made them a formidable team.

“Jim took me under his wing and took me to all the different farms out in the boondocks,” Torres said. “We were driving down this road and that road.”

“Yeah, we wandered around,” Cunningham said. “We tried to go at certain times when something was happening, like we knew they were chopping the corn. Or I knew people in Le Grand when they were picking tomatoes or picking peppers.”

The exhibit is the culmination of a three-year study of the Central Valley’s agricultural history, which started in 2019 with a look at the development of irrigation. The founding of settlements throughout the valley was examined in 2021, while the evolution of farm equipment was the subject of an exhibit earlier this year.

Working in the fields often put the photographers in contact with some of California’s 600,000 farm workers. Even despite the language barrier, the photographers were surprised at how well they were able to communicate with each other.

“The people working, none of ’em seemed to care,” Cunningham said. “We were out there taking pictures. A lot of ’em were smiling and waving at you, you know?”

“There was this one girl who was walking in the field and I was at a distance. I had a long zoom lens and she just waved and posed for me,” said Torres.

Torres said he learned a lot from the experience and hoped audiences would do the same after viewing his work.

“A lot of times I take for granted just going to the store and buying a beef steak and some broccoli,” Torres said. “You don’t really think about all the labor intensity that has gone into it.”

In addition to the photos, the exhibit will feature written excerpts on the impact of climate change, population growth and legislation on the valley’s farming practices.

Torres, Cunningham and MCC photographer Susan Walsh will open the exhibit with a presentation on Thursday at 5 p.m.

For more information, you can contact the Museum office at (209) 723-2401. The Courthouse Museum is located at 21st and N streets in downtown Merced.