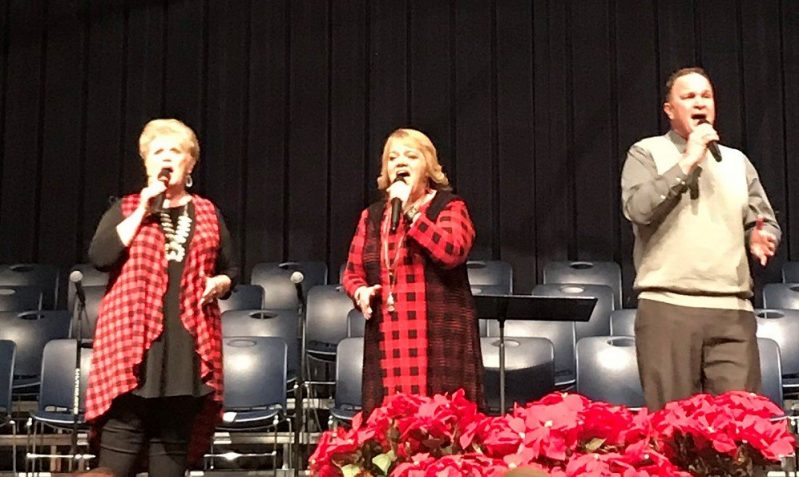 Gwen Breinig, Julie Eichelberger and Darryl Vitato make up Bridge of Grace, a trio which has been performing at the concerts at CLC for five years. 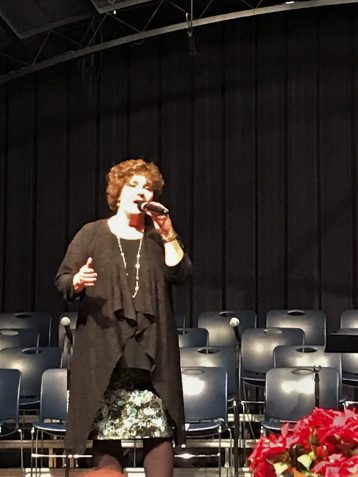 Brenda Coogan of Evidence Quartet told the congregation that the group coined its name during a discussion of their mission statement, which is ‘to be the evidence of God’s goodness and His grace and the hope that we have.’

Guests at Christian Life Center (“CLC”) in Merced enjoyed a rousing two-hour long Gospel Concert put on by Julie N Friends on the evening of December 29.

After a prayer and the singing of the National Anthem, the Gospel program began with Julie Eichelberger and Bill Burkett, then Bridge of Grace, Evidence Quartet, and Sandra Saben from First Assembly in Chowchilla, on piano.

Eichelberger, who founded the concerts at CLC, told the Times, “We’ve been doing the concerts for about five years now at Christian Life Center, when there is a fifth Sunday of the month. We call the concerts Julie N Friends because I’ve been singing since I could talk, and music is breath for me, and I wanted more people to sing with.

“I love to sing and be able to share that with people. For the people who sang at the concert, that’s their ministry.”

Describing Bridge of Grace, Eichelberger said, “I’m in a trio, Bridge of Grace.  I met the members on the Praise Team at my church, Gwen Breinig and Darryl Vitato.  I asked them to sing with me, and the concert series came up because I wanted to have a place to sing.”

One of the highlights of the concert was Bridge of Grace singing “Jerusalem”.

Eichelberger, who especially enjoys the stories relayed through songs’ lyrics, told the Times, “In the song, Jerusalem is like Heaven on earth.  The lyrics are about the streets of gold in the city where we’re going to go when we die.  It was about how John saw day but not night and saw them worshiping God, the great I Am, and he saw the lion lay down by the lamb so in eternity, the lions and the lambs will get along.  It’s a perfect place.”

She added, “That’s what I like about Southern Gospel songs.  There are stories to them, and the stories fit things people have gone through.  I don’t sing a song just to sing a song; the song has to have meaning to me.  These stories are about God, and they get you through so many things.”

Eichelberger explained, “Evidence Quartet has been together for years.  Brenda’s mother, Charlotte, started the group.  She passed in 2015.  CLC was the same venue they performed at a few days before she died.  After that concert, she cracked a really good joke.  She was a fireball on the piano.  A few days later, she was gone.  Evidence did a lot more with piano then, but now that she’s gone they do a lot more on tracks.  They have a lot of heart in their singing and their ministry.”

A highlight of the concert was Evidence Quartet singing “Sheltered in the Arms of God”.  The song is inspiring in its message that there may be terrible events we experience here on earth, but God provides a shelter from it all.

Some of the lyrics are:

“I feel the touch of hands so kind and tender.

They’re leading me in the paths that I must trod.

I’ll have no fear for Jesus walks beside me

For I’m sheltered in the arms of God.”

A special guest during the concert was Sandra Saben, who was a live wire on piano during the Hymn Sing!

During the concert, there was a bit of comic relief.

Eichelberger told the Times, “Somehow, the mics got mixed up. My husband handles the mics, and somehow they got all mixed up. We finally got it straightened out. We always have a good time, even with little mishaps.”

The next Julie N Friends concert at CLC will be held on March 29. It will feature Lisa Daggs, who was the 2017 International Country Music Association’s Entertainer of the Year; Ronnie Horton; Bridge of Grace and more.