Legends live on in historic town of Hornitos 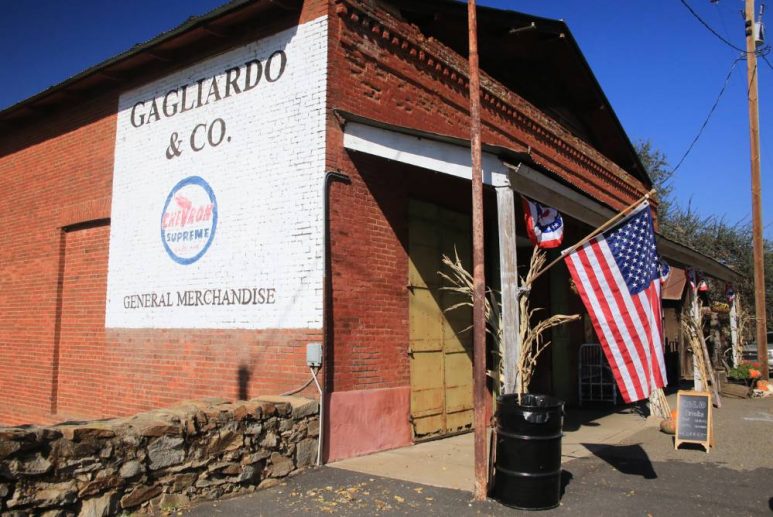 The Gagliardo & Co merchandise store is still in operation today. 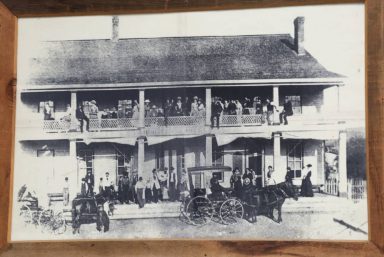 The Hornitos Hotel around 1930. 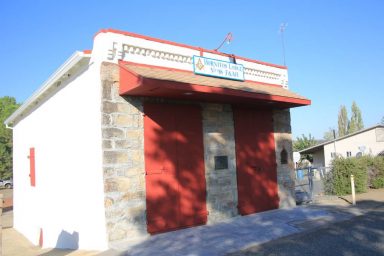 The historic Hornitos Masonic Lodge No. 98. 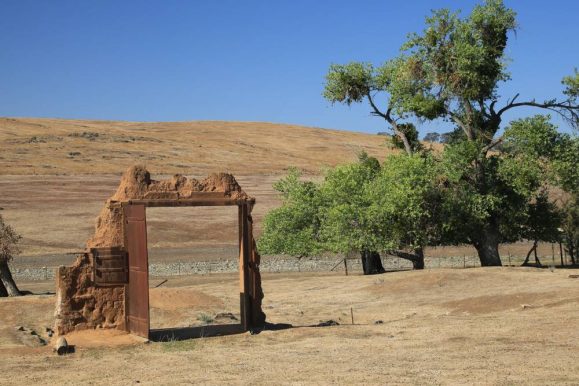 Remains of an opium den in Hornitos. 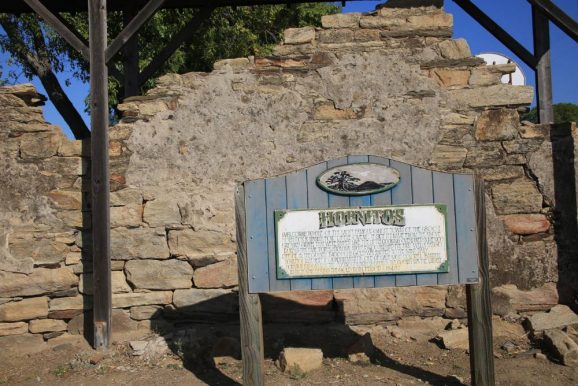 The adobe remnants of the first Wells Fargo office in Mariposa County.

By Jim Cunningham and Flip Hassett

Hornitos was established in the 1840s when the town fathers of Quartzburg (located about six miles away), concerned over their community’s image banished the riffraff: gamblers, drinkers, and troublemakers to an area several miles away on Burns Creek – but, as luck would have it, they quickly found gold in Burns Creek next to their banished location and named the encampment Hornitos after the rock piles found all over the area.

In Spanish, Hornitos means “little ovens.” There were several stories about the name but no definitive answer: (1) Mexican families would actually do their cooking in hand-built ovens outside of their homes called cooking hornos, or (2) Early Mexican settlers in the area buried their dead above ground as it was too rocky to dig a grave. They piled rocks on top of crude coffins and as the coffins and human remains settled they piled on more rocks – giving them a mounded or oven shape.

Hornitos became the first incorporated town in Mariposa County in 1872 and was the most important place between Stockton and Los Angeles. Probably its most notable visitor was ex-president Ulysses S. Grant, who stayed in Hornitos on his way to Yosemite in 1879.

In its heyday, Hornitos was one of the richest, roughest minig towns in the West. But then the mines played out. The last to go was the Mount Gaines mine, which yielded more than $7 million in gold and was finally closed shortly after World War II.

Hornitos was, at first, part of the gigantic Mariposa County, named by Moraga’s expedition for the vast numbers of beautiful butterflies they saw there. Mariposa is the Spanish name for butterfly. In 1850, when California achieved statehood, 27 counties were formed in California. Of these, Mariposa was the largest, covering about 1/6 of the state, from the middle of the state down to the boundary of San Diego County. Later, all or part of 43 counties were carved out of the early Mariposa County area.

Hornitos at one time had its own newspaper, hotel, bath house and general mercantile store owned by the not-yet chocolate entrepreneur Domingo Ghirardelli. The town once covered about 640 acres but is now comprised of only several homes which surround the main street of the town.

When driving into town from Highway 140, the town begins on the southern border with the adobe remnants of the first Wells Fargo office in Mariposa County. Some $40,000 in gold was shipped to the mint daily.

Across the street is the Hornitos Masonic Lodge No. 98. Driving northward down the Main Street is the Community Park, where community events and vendor fairs take place. Next is the centerpiece of the town: the town plaza, which was comprised of a café, a store and meat market and Post Office (all are vacant now except for the Post Office). Next to these stores and facing the Main Street is the most familiar building on the Plaza: The Plaza Adobe, the local bar and gathering place for many visitors and locals in Mariposa and Merced Counties. It was established in 1948 by the Ortiz family — and they still operate it today. The inside of the bar is full of historical artifacts and the existing wooden back bar came around the horn to San Francisco in 1852 and was previously used in Virginia City and Merced. The actual bar itself was made by the Brunswick Company, who quit making wooden bars when Prohibition came into existence, and they started building pool tables. Another story you might ask the staff is about the “Naked Lady” painting in the corner next to the bar – a great gossip at best!

Across from the Plaza on the east side of the street is the Community Center (Stag Hall) where the annual “Enchiladas Feed” is held. In the early days underneath the stage was where many local sharpshooters improved their aim by shooting into the earth bank that the stage was built upon

Now, many Merced County residents visit every first Saturday in March for the Hornitas Enchiladas feed sponsored by the Hornitos School Patrons Club. (On a personal note: We whole-heartedly support and enjoy this event!)

Going further north next to the Community Center was a store operated by the Ghirardelli Company in 1858 (yes, the chocolate people!), but it was just a merchandise store, and no chocolate was ever produced there. It exists today as ruins of broken walls and several standing brick walls.

At the northern end of the street on the plaza side (west) was the Gagliardo & Co store which is still in operation today. It is a merchandise store and fun to idle in and do a little shopping as there are lots of interesting items to see and purchase.

Finally up-hill on the next street is the Hornitos jail, two-foot-thick granite walls, built in the 1800s. Many stories involve the jail – from storing gold to a tragic tale of a Chinese prisoner who was incarcerated when he threw a rock at some boys who were harassing him and he hit one of them. The man was arrested and during the night he was killed in the jail.

The gem of the town is definitely St. Catherine’s Church and cemetery, which are built in the 1860s on a hill over-looking the town. The church is still used today. Mass is held twice a year at All Souls Day (Nov. 2) and April around St. Catherine’s Day. Weddings and Baptisms are also held periodically. It is a part of the St. Joseph’s Parish in Mariposa. The cemetery is still in use for the town’s residents and the Gold Rush Era cemetery lies behind it.

The primary economic driver in those early days of Hornitos was gold. Hornitos was surrounded by multiple gold mines. Many of the workers at one of the mines — the Blue Moon Mine — were actually derelicts from the streets of Sacramento. In fact, the Blue Moon Mine made a weekly motor coach run to Sacramento and back. The incoming coach would be carrying a fresh load of penniless men raring to go to work at the mine. The out-going coach would be carrying a load of tired and dirty men – worn out from two weeks hard labor underground, red-eyed from their first binge in many weeks.

There are many legends about Hornitos, especially about the bandit Joaquin Murrieta and the tunnels in town where he would allegedly escape from the authorities. Most locals in town said these stories were not true, but the legend of Joaquin Murrieta makes a great story in our local history.

In the Sierra of Mariposa, gold was abundant, but supplies were not. Any freight had to come from Stockton over the rough dirt of the Stockton-Fort Millerton Road across the Merced River at Merced Falls. Immediately after crossing the river, freighters could turn east and head up to the hills to Hornitos or continue on the Stockton-Fort Millerton Road. The trip from Stockton was an all-day affair and passengers would arrive at Hornitos at 7 p.m., after traveling through Snellingville (Snelling) and Phillips Ferry (Merced Falls).

Social life in Hornitos in the 1800s centered around organizations. There were Masons and Eastern Star, Odd Fellows and Rebekahs, Native Sons of the Golden West, and Woodmen.

The Hornitos Patrons Club, is still very active in Hornitos, as they began in the late 1940s as the Hornitos PTA. The group raises monies to send Hornitos school children on field trips and also pay for hot lunches each day. They conduct several major events: The Enchilada Dinner, which is held the first Saturday in March; a Flea Market on the first Sunday in October; and The Candle Lighting (Day of the Dead) every Nov. 2. This celebration has been held for the past 116 years. Always on Nov. 2, people of all denominations gather in the town plaza in front of the Stag Hall. At a designated time, the candles are lit and people walk in pairs up the short hill to St. Catherine’s Cemetery where Dona Candlelaria is honored at her grave. People then go about the cemetery, lighting candles on the graves until the entire cemetery is aglow. Some go to the church to attend one of the two annual Catholic masses, while the church bell tolls over the town. Many adjourn to the Stag Hall for refreshments overseen by the Hornitos Patrons Club.

Today, few people know about the old Hornitos and its traditions. Because of the legend of Joaquin Murrieta and his tunnels, some tourists make a a quick side trip on the route from Merced to Yosemite.

The legend persists and so does the influence of the Old West. Hornitos has a haunting quality about it, particularly at sundown, when the ruins are silhouetted against a big sky and stories are retold.

The people are friendly, proud of their community and love to tell tales of the Old West and the story of Hornitos.

So if you go, try out the Plaza Adobe, grab a beer or cocktail and enjoy the stories and camaraderie you will find from the customers and staff.

A special thank you to Delores, Carlos (Pancho), and Richie Ortiz for their willingness to share their knowledge of the history of Hornitos.

(NOTE: There will be a follow up article and pictures of the “All Souls Day Celebration” on Nov. 2.)

Celebrating All Souls Day in historic town of Hornitos