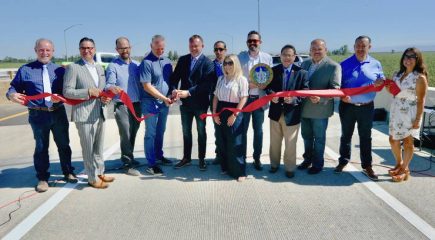 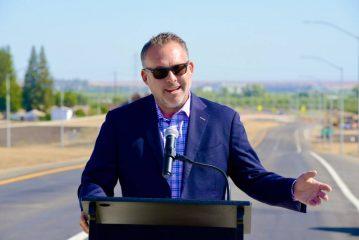 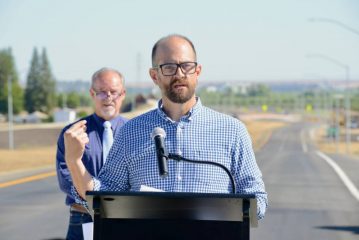 Supervisor Josh Pedrozo: ‘We are not stopping here. We will continue to work on additional phases of the project, including the Atwater-Merced Expressway.’ 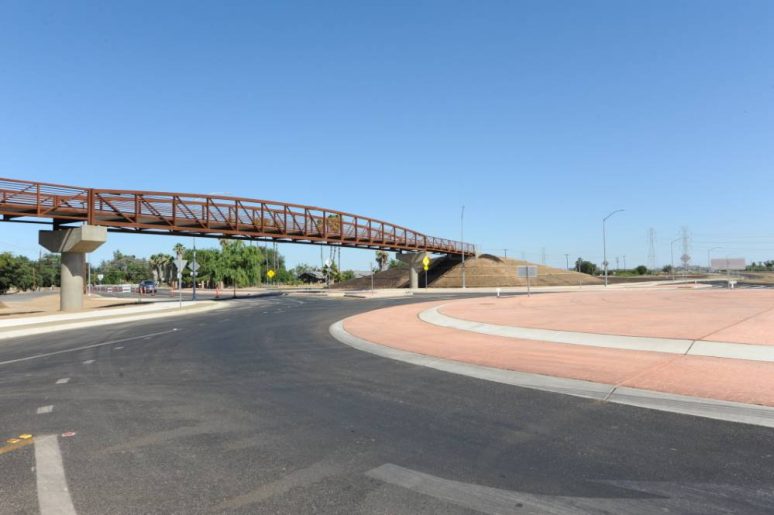 The new roundabout and pedestrian bridge at Olive Avenue and Campus Parkway. 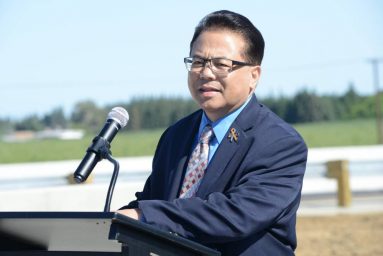 Dennis Agar of Caltrans: ‘We have already invested over $16.4 billion of SB1 funding across California.’ 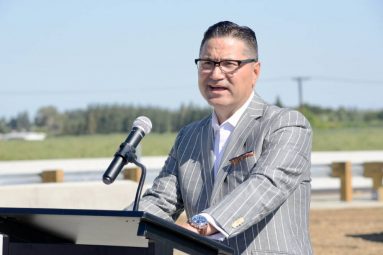 UC Merced Chancellor Juan Sanchez Munoz: Since the beginning, UC Merced has made efforts to connect in many ways with our surrounding communities, and today that connection could not be clearer.’ 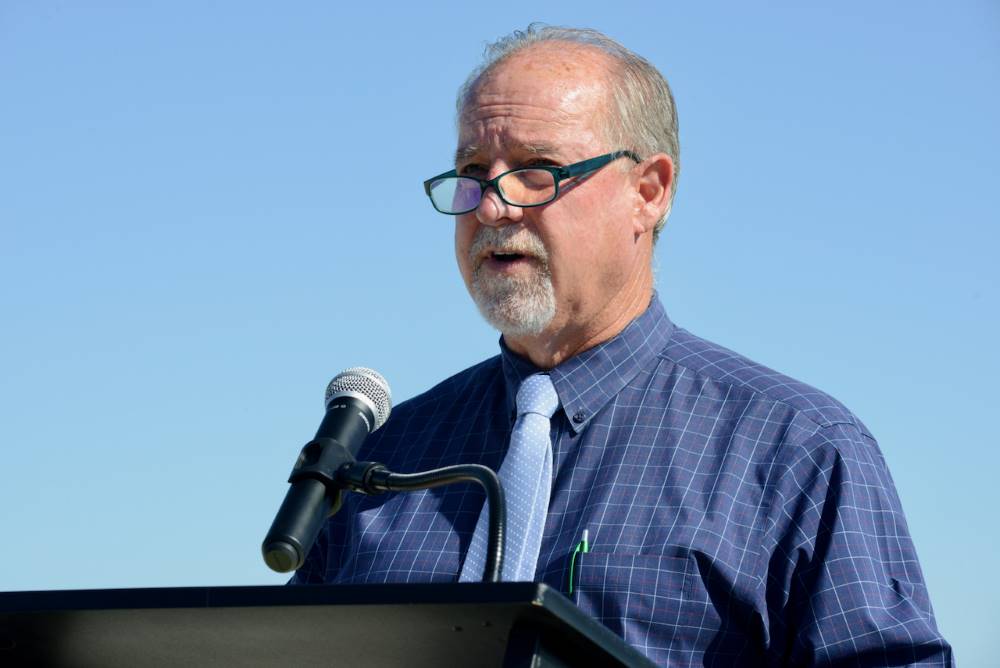 Supervisor Pareira: ‘People hate roundabouts until they drive on them.’

It will go down as the most important ribbon-cutting event of 2022, and one of the most significant over the past decade.

Local leaders — from the City of Merced to the State Legislature — officially opened Segment III of the massive, $100 million Campus Parkway Project on July 8.

“For Merced residents, this is a major win,” said Sarah Boyle, a Merced City Council member. “Campus Parkway provides a new corridor that opens opportunities for all residents.”

County Supervisor Josh Pedrozo said: “Today is a big day for all us. This ribbon cutting is the culmination of many years of planning, advocation and eventually construction of an expressway that will improve how traffic flows in and around Merced.”

And Assemblyman Adam Gray pointed out: “What’s so special about this particular effort is that this started with two politicians — a Democrat and a Republican — working hand in glove together, and putting the needs of the community really before politics, and caring more about how to work together and getting something done.”

Segment III is the largest portion of the Campus Parkway Project that will directly connect Highway 99 and the UC Merced campus community. The new section — which is now fully open to the public — extends the four-lane expressway from Highway 140 all the way to Yosemite Avenue. It includes roundabouts — a relatively new feature for Merced drivers — at Olive Avenue and Yosemite Avenue to safety and efficiently move traffic through. There’s also a pedestrian bridge at the Olive Avenue roundabout.

The project also includes a north/south bike path that extends the length of the expressway. State and local transportation officials are currently working on a fourth segment of the project to extend Campus Parkway further north and connect it to Bellevue Road, at the doorstep of UC Merced.

But it doesn’t stop there.

Campus Parkway is part of the larger “Merced Loop System” that is expected to circle the City of Merced and connects surrounding communities. Included in the route is the Atwater-Merced Expressway that will eventually extend from Highway 99 to Castle. The loop is designed to reduce congestion, improve connection to existing highways and stimulate economic development opportunities.

Leaders were all smiles last Friday as they gathered with a good-size crowd of local residents and other officials at the top of the Campus Parkway overpass at Bear Creek.

From the vantage point, guests could see vast areas of farmland to the east, a cityscape to the west, and the UC Merced campus to the north.

“I would like to offer my sincere thanks and appreciation to both Assemblyman Gray and then-Senator [Anthony] Cannella,” said Lloyd Pareira, the chairman of the Merced County Board of Supervisors. “Their vision and their ability to advocate for their district in Sacramento, to me, is unparalleled.”

When Assemblyman Gray spoke, he focused on the idea of a bipartisan effort that enabled the Campus Parkway funding to take place.

“Too often in politics in 2022, we see the frustrations with government,” he told those in attendance. “We see what doesn’t work. On both sides of the aisle, people complain about what can’t get done.”

He added, “We were able to make a partnership on the Transportation Infrastructure Act to ensure that whatever deal got done would be a good deal for Merced County.”

Local leaders and officials credit the leadership of Assemblyman Gray and former State Senator Anthony Cannella for making sure the Merced project received $100 million for construction under Senate Bill 132 which lawmakers passed in April of 2017.

However, the effort wasn’t without controversy. SB 132 surfaced as a separate bill in the heated lead-up to the Road Repair and Accountability Act of 2017 (Senate Bill 1 or “SB1”), also known as the “Gas Tax.”

SB1 was expected to generate more than $5 billion per year for road repairs and local transit projects by indefinitely increasing gas and diesel taxes and hiking vehicle registration fees. The increases were estimated to cost the average driver roughly $10 per month.

Gray and Cannella signed onto SB1 with the addition of SB132. At the time, Democrats defended the deal-making, saying it supported worthwhile and “shovel-ready” projects such as the extension of the Altamont Corridor Express to Ceres and Merced and the Campus Parkway Project. Not surprisingly, Republicans in the Assembly blasted what they called political maneuvering that allowed the “Gas Tax” to pass.

At Friday’s ribbon-cutting, Assemblyman Gray said, “I would go back and do it 100 times again, making the same choices… We were able to make a partnership on the Transportation Infrastructure Act to ensure that whatever deal got done would be a good deal for Merced County.”

And then he quipped: “I had to change my cell number after that, but that’s OK.”

The former state senator concluded: “The job of government is to do and build big things. And it was an honor to be a part of this big thing.”

There’s no doubt SB1 is making a big-picture impact.

“We have already invested over $16.4 billion of SB1 funding across California (since 2017),” said Dennis Agar, the Caltrans District 10 director for this area. “ That includes 4,000 projects completed, and another 4,000 projects being planned or in progress to get out into construction. SB1 funding has also created a lot of jobs. At this time, the count is 213,000 jobs for the people in California. This is an exciting time.”

The investments were not overlooked by UC Merced Chancellor Juan Sanchez Munoz.

“Since the beginning, UC Merced has made efforts to connect in many ways with our surrounding communities, and today that connection could not be clearer. Campus Parkway has attracted new businesses, and soon the corridor will be bustling with development and enriching the region with jobs and families.”

The chancellor told local leaders in the audience: “We share, all of us together, a future. And indeed, from my point of view, from this perspective, from this vantage point, I would say our future looks exceedingly bright. Thank you all for making this possible.”

In short, ‘Good things are coming’

Local leaders also pointed out some specifics about the project residents should be aware of.

“People hate roundabouts until they drive on them,” Supervisor Pareira pointed out. “I think you will enjoy them once you get used to them.”

Supervisor Pedrozo said the new corridor will improve traffic flow and commute times for Mercedians and those traveling to and from the city. He said Campus Parkway will also move traffic from residential roadways thereby improving safety and decreasing emissions from vehicles sitting in traffic and at stop sigs.

Said Councilwoman Boyle, “Campus Parkway will support commercial centers currently under construction, connecting Highway 99 to Yosemite Avenue, and in the short future, will be the key gateway to a new outdoor sports complex on Mission Avenue and Tyler Road.

“The parkway puts Merced in a position to attract research and development centers to the University Industrial Park by providing immediate access to world-class R & B institutions. Major employment centers — including retail, hospitality, industrial, medical and more — will be linked via Campus Parkway.”