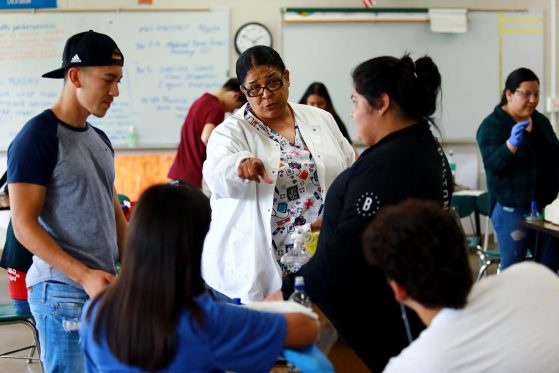 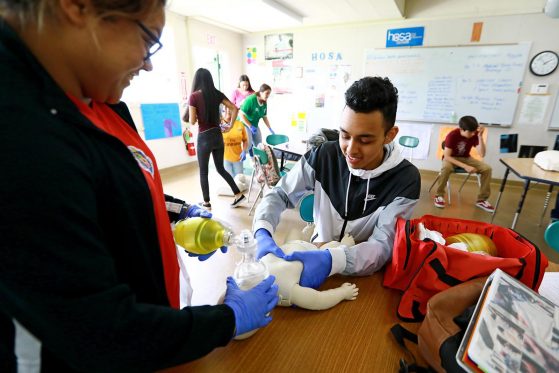 Several students at Le Grand High School have their sights set on becoming doctors, thanks to the school’s Medical Academy.

Teresa Moreno-Gomez, 17, of Planada is a senior who has been accepted to four prestigious University of California schools and California State University, Stanislaus. She’s unsure where she will go but wants to become an oncologist.

Her path to medicine came about in a way somewhat unexpected. When she was 5 years old, she was diagnosed with cancer and had to have a kidney removed. She’s been cancer-free since that time.

Moreno, who has a 4.3 grade point average, says she always knew she wanted to be in the medical field. She hopes to get a bachelor of science degree in biology or pre-health and then go to a medical school to become an oncologist — something that’s likely to take eight years.

But when her training is over, Moreno wants to return to the San Joaquin Valley.

“I want to be able to give back to the community that helped me,” Moreno says. “The Medical Academy helped me look at different aspects of the medical field and helped me see different pathways.”

Isak Murillo, 18, is a senior who plans to attend Sacramento State University to get his bachelor of science degree and would like to go to Stanford University Medical School. He wants to become a general surgeon and, like Moreno, come back to the community and do what was done for him.

Murillo said he grew up in hospitals and had surgeries when he was 1 and 2 years old. Then he had an appendectomy at age 5. These experiences gravitated him to a career in medicine.

Both Moreno and Murillo already are certified nursing assistants. Part of their training is being exposed to medical professionals and their work at Mercy Medical Center in Merced, working in obstetrics, pharmacy, surgery, oncology and radiology departments.

Murillo, who has a 3.75 GPA, wants to do the best that he can; he works in the hospital’s radiology department.

Donna Alley, superintendent of the Le Grand Union High School District, said this is the fifth year for the Medical Academy. The academy started out with a $130,000 grant six years ago. Sixteen seniors are involved in academy programs and 100 students in ninth through 12th grades are participating. Last year 21 students graduated from the academy.

Advisory council members meet at least three times a year. The council holds a fall conference for students and their parents. The all-day program, usually held on a Saturday, offers classes for parents and students to learn about colleges offering medical programs and financial aid opportunities. Sessions also are held so students can become aware of health careers and college options. Their guest speaker generally is a doctor.

Last fall, a fundraising dinner raised about $17,000 for scholarships to graduating seniors.

Alley said the Medical Academy is an outgrowth of efforts by the Building Healthy Communities program, pushing career technical education in the medical field. Saying the Merced area needs doctors and other medical professionals across the board, she is hoping more people in the medical field will get involved supporting the academy’s efforts.