Photo provided by Merced Fire Department
Around TownInsights and Opinions

Against the Wind: A Column by Jonathan Whitaker 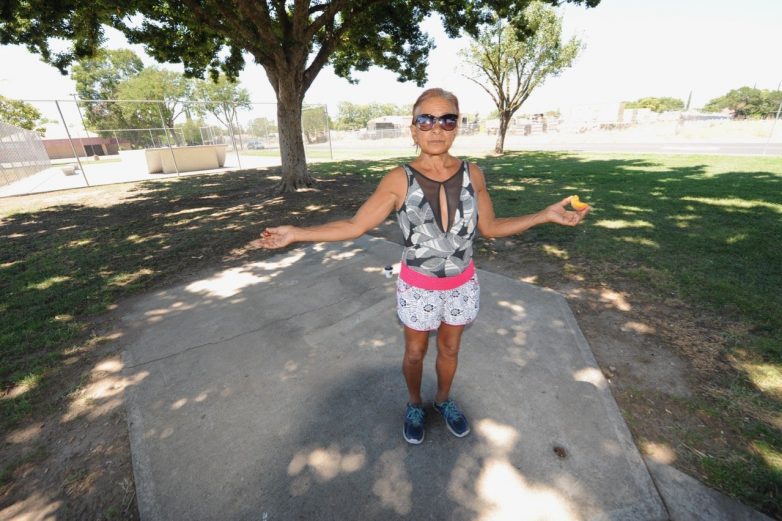 Homeless resident Monica Villa stands in an area where a cement picnic table with connecting benches was removed at Stephen Leonard Park in south Merced. 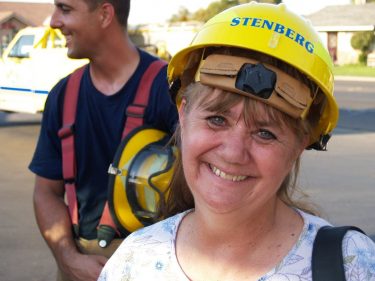 A plaque honoring the late Marci Stenberg, a well-known local photojournalist, will be officially unveiled in the splash pad area of Stephen Leonard Park at noon on Aug. 17. 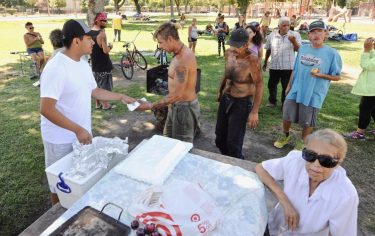 In recent columns, I’ve been writing about various aspects of Stephen Leonard Park at 8th and T streets in south Merced.
I was there last Sunday, and before I got out of my car, the outside temperature indicator on the dashboard was at 107 degrees Fahrenheit.

I’m happy to report the splash pad in the kids area of the park was full of children bouncing around in the water, as their parents watched or joined in.

That’s good news considering there was some debate among residents before the city finally decided to take out the dilapidated pool that was once there, and remodel the play area with state grant money.

It’s only fitting the splash pad is named in honor of someone who loved children, and the image of them having fun, and just being innocent and curious as they discover the world around them.

A plaque honoring the late Marci Stenberg has been completed and will be officially unveiled at noon on Aug. 17 in the splash pad area. This will be followed at 1 p.m. with a reception at the Merced Multicultural Center on West Main Street.
Stenberg was a Merced Sun-Star photographer from the late 1980s until her sudden death Dec. 20, 2012 at the age of 66.
Victor Patton, a member of the committee planning the design and installation of the memorial plaque, said $3,500 was raised in donations throughout the community. The fund-raising campaign began in June 2018.

Stenberg loved nature, Yosemite Park and children. The mother of three children and grandmother of seven was a fixture in the community through her tireless efforts chronicling people and events through photography. She is remembered for her selflessness, kindness and generosity, Patton said.

So when I got out of the car, homeless advocate and mayoral candidate Monica Villa, who frequents the park, called out to me. She was surrounded by a group of adults — several of them seniors — who were from the Olive East Seventh-day Adventist Church in Merced.

They come once a month to feed people who are gathered at the park and are hungry and/or thirsty.
Villa was explaining to them how the city recently removed a big, cement picnic table with bench seating from a corner of the park, and across the street from a home and its owner who has been complaining about trash and garbage spread out on the park lawn, along with issues concerning loitering, threatening language and criminal behavior.

Apparently, the table was removed to diffuse tensions at the park. Villa said she didn’t appreciate the strategy, and pointed out that the bench was used by seniors in a county program who gather in that area once a month for a delivery from the Food Bank.

However, Villa did admit that she and her struggling comrades who remain at the park on a daily basis have moved away from that particular corner.

While the churchgoers were unpacking food from their cars, I could see the homeowner — Mr. Garibay — was out in front of his house watching what was going on, and shaking his head. He later told me that feeding the people who stay in the park all day surrounded by all kinds of belongings is not very wise. He said it only attracts more transients, and more problems for the neighborhood.

Interestingly, while we talked, I noticed an older woman who was stretched out resting or sleeping on a bench near Garibay’s porch. Garibay said she frequently walks through the neighborhood, talking mostly to herself, and he didn’t mind helping her out with a place to rest. He said she didn’t cause him problems.

Meanwhile, church volunteers handed out potato burritos, pre-packaged sandwiches, peaches and plums, and flavored water to about 20 adults who consumed the nourishment while sitting on the ground under the shade of park trees. Also, three small children from the splash park ran over to partake in the free grub.

One of the younger church volunteers, Axel Tello, told the gathering of people that they had a constitutional right to be in the park.

Tello later told me, “We are hoping to create change in the park, and hopefully inspire other citizens and residents. These parks are open to everybody who wants to come here. They shouldn’t be told what to do here. These people are American citizens.”

I also talked to 43-year-old Michael Duree who said he has been involved in altercations with Garibay that ended with some threatening behavior, arm swings, and blows on four separate occasions. He claims he did not provoke the situations, and that they both got into it. These days, Duree said he goes out of his way to avoid Garibay.

Duree also told me that he is homeless, and has been frequenting the park during daytime hours for the past three years. He says he likes riding his BMX bike in the new Skatepark area that was part of the remodeling work in recent years.

He said he was a Dos Palos grad who has been living in Merced for the past 10 years. His dream is to compete in the annual Summer X Games national competition and win a medal — bronze, silver or gold — it doesn’t matter.

“I’ve been in Merced County for most of my life,” he said. “For me, there is no place to hang out at night. You either go to jail, or get a ticket.”