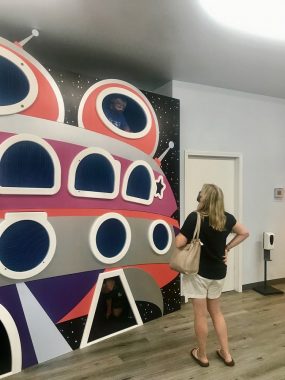 A parent watches as kids climb inside a four-story maze ‘Spaceship’ at the Discovery Station. 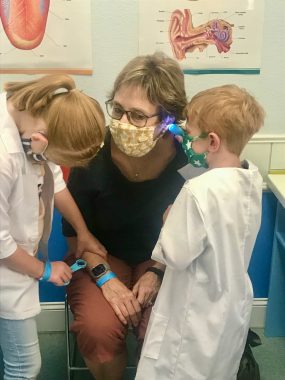 A boy pretending to be a doctor uses an otoscope to examine a family member’s ear, and a girl uses a dermascope to study skin. 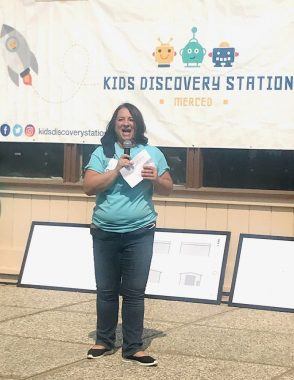 An enthusiastic Professor Mayya Tokman leads the opening ceremony of the Kids Discovery Station in Merced. 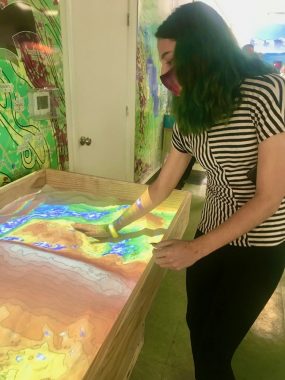 Located at 350 W. Yosemite Avenue, across the street from Merced College, the new children’s center is now open from 10 a.m. to 6 p.m., Saturday and Sunday; and 9:30 a.m. to 4:30 p.m., Tuesday through Friday. The museum is closed on Mondays. Admission is free.

The museum features three areas where kids through age 12 will experience the joy of playing and exploring. One of its missions is to give kids activities where they can pretend to be doing a job which inspires them to envision a productive and satisfying future career.

There is space for further development of the museum if more community partners join in with much needed additional funding.

The ceremony began as Mayya Tokman, executive director and president of the Board of Directors of Kids Discovery Station, as well as a professor of Applied Mathematics at UC Merced, described her role in spearheading the development of Merced’s first children’s museum.

“I came to Merced 16 years ago,” she explained. “I’m one of the founding faculty members of UC Merced.  My husband and I are raising our son, Kiki, here.”

Kiki, age 9, was Professor Tokman’s inspiration as she envisioned and began to plan the children’s museum three years ago.

In her travels to other countries, Professor Tokman has observed many wonderful places for children to play.

For example, when the family visited the Castle of Elsinore in Denmark, she was thrilled that a place featuring 15th century tapestries which were clearly off limits for children to touch also had a room completely filled with Legos.

She exclaimed, “The trip became fun for me and him.”

“If all the cities and countries could have wonderful places for children, can Merced?  Absolutely.

“I wanted to create this in Merced so we would be investing in our children by allowing them to create, grow, get excited and be inspired.  It’s about exposure.  We can expose our children to different things and let them choose.  The museum is a place that has something for everyone.

“I found amazing people who were willing to serve on the Board and founding partners who invested and donated and made this possible, and amazing designers, builders, custodians, educators, interns and staff.”

He said, “Mayya came to my office with this dream.  She came in ready for every question I had.  I spent six months on the Board, and then I thought I’d do better as her landlord.  We bought the facility.  It’s going to be a great place.”

He thanked Professor Tokman for her energy and her idea.

Marie Pickney of First 5 Merced County, a founding partner, was the next speaker.

She said, “The museum allows children to learn and explore.  We want kids brains to grow.  It has music, art, nature, science and culture.  First 5 is honored to be a part of bringing this to Merced.”

She said, “We were the general contractor on the UC Merced 2020 Project, and we had the materials and the subcontractors.  We came in and got the space ready.

“We are engineers, so we grew up seeing the application of science and math to real life.  We thought, ‘This is an opportunity for children to learn by doing and through play, take on roles and visualize their future selves in the roles.’”

After the ribbon-cutting ceremony, there was much excitement as the guests were treated to tours of the museum and also allowed to explore it on their own.

“One is Little Explorers Planet, with a space explorers’ canteen and supply base.  It is a restaurant/kitchen/store exhibit where kids can pretend to run a restaurant, and there is an area where the little ones who crawl can touch different textures and spin shiny things and explore.

“There is a spaceship which is a four-story maze, and kids can pretend to be on intergalactic journeys.

“It has the Augmented Reality Sandbox and also has the Space and Time Travel exhibit where you can pretend to go to Hollywood Boulevard or Bora Bora or to the moon.  There is also the Infinity Mirror, where you can see yourself reflected an infinite number of times, and other cool stuff.

“The last area is The Home Valley exhibit.  It is indoors, but a portion will be outdoors.  It has a health center sponsored by Golden Valley Health Centers, and in the health center, kids can pretend to be doctors, nurses or other health professionals.  There is also a Creativity City and an ag exhibit sponsored by Hilmar Cheese.  It’s still being built.”

One of the highlights of the museum was the Augmented Reality Sandbox at Innovation Island.

Describing it, Professor Tokman said, “Imagine you’re playing in a sandbox and you make mountains and valleys in the sand and dig up holes.  If you saw this landscape you are creating on a map, it would be all different colors and different elevations.  You would see blue which would represent water, and the mountain might be white on top to indicate snow.

“The Augmented Reality Sandbox puts the sandbox and the map together, using a projector.  The technology recognizes what landscape you’re building and immediately projects the correct colors and the right map onto it.  If you dig a hole, it fills it with water which is blue.  If you build a mountain, it makes the right color — green, yellow or orange — and if you build it high enough, it will be white at the top.  You can dynamically change it.  As you are building your landscape, it recognizes where the mountain or lake is and projects the right colors and the right map onto it.”

At Innovation Island’s Augmented Reality Sandbox, Juanita Sprowell, a UC Merced intern who helped put it together in 2018 as the first pilot exhibit, played with the sand and chatted with the opening day visitors.

Describing the pilot exhibits, Professor Tokman said, “We wanted to test the waters and see if it was something that would attract people in Merced.  The first pilot exhibit was at the Merced Multicultural Arts Center in 2018, and it was very successful.  Over the course of two weeks, with the only advertising being through social media and word of mouth, there were 1,000 visits, and the general consensus was the visitors wanted the exhibits to be made permanent.

“We started fundraising, and it culminated in the opening of the museum.”

Describing the future of the museum, Professor Tokman said, “In the works is an upcoming Kids Discovery Station After-Hours Program.  It will involve clubs for kids where they can learn about coding, electronics, do art projects and a whole variety of things.

“We need partners for outdoor exhibits.

“We have funded agriculture, dairy, and farm exhibit through Hilmar Cheese, but the area needs to be developed further and we need more funding to make that happen.

“We could have a picnic ground, playground, lectures, and movies, so we’re still looking for funding to enable us to create that.”