Mayor Mike Murphy presents the grand opening of the new and improved playground at Applegate Park in Merced during a ceremony on Tuesday. 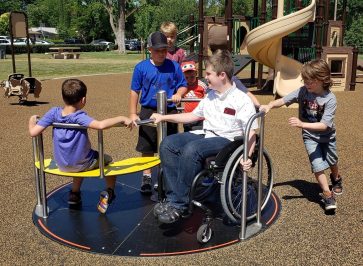 Walker Murphy enjoys the spin as other kids share the fun on a new playground ride. 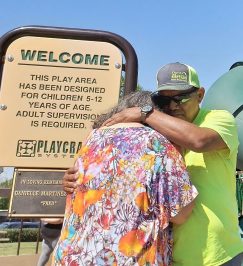 Art Reyes and Kathleen Martinez are overcome with emotion after they unveiled a new plaque that honors their daughter Danielle Martinez Reyes who died at age 5 in 1997. 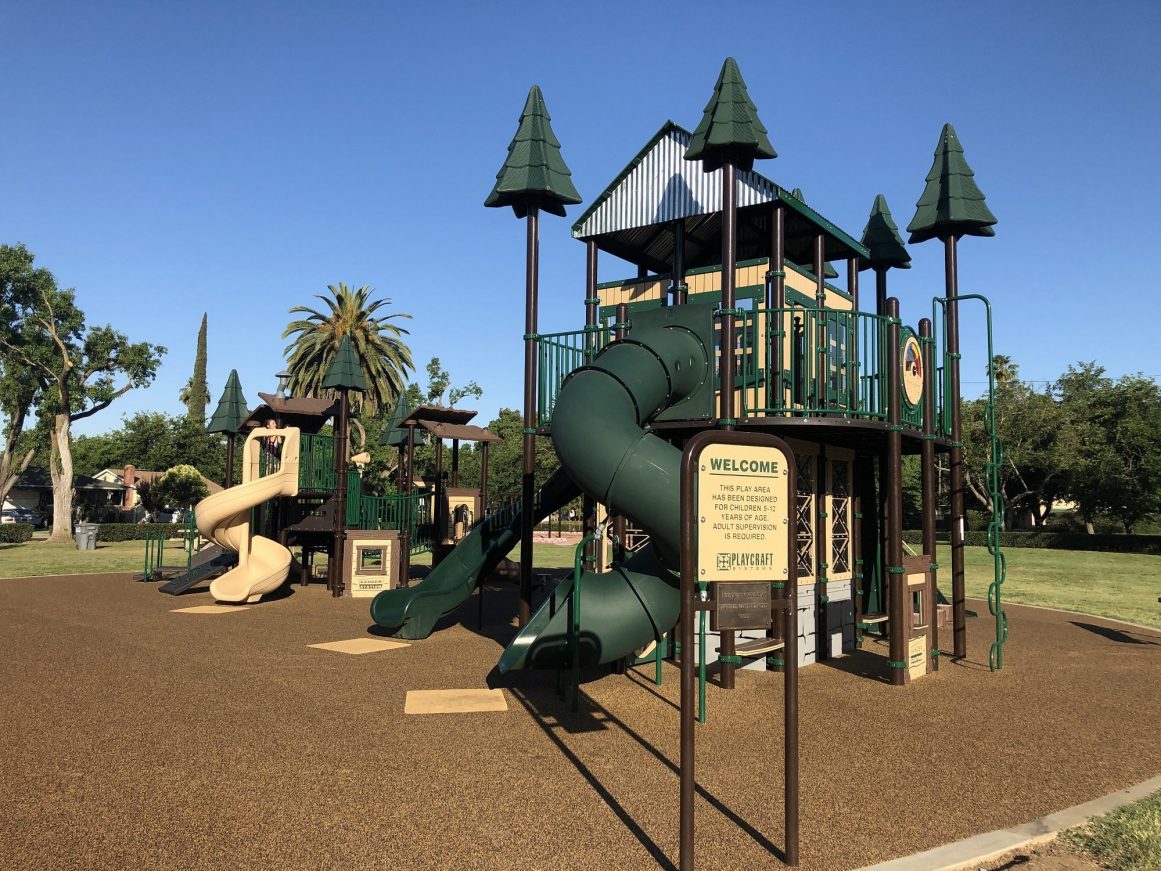 With young children running and jumping about as a charming backdrop, and while youthful laughter filled the air, the renewed playground at Applegate Park in Merced was honored with a grand opening ceremony on Tuesday.

Mayor Mike Murphy lauded the innovative features of the new play structure and equipment, and pointed out that the site represents the city’s first accessible playground for children of all abilities.

“Instead of the wood fiber that our other parks have, this playground has a thick rubber mat on the ground so that kids of all abilities can access the play structure,” Mayor Murphy proudly told a crowd of parents, city workers and children. “Several of the [moving] features are designed to allow ready access too. It is my hope that our future parks can be designed the same way so that all kids can play on them.”

The mayor’s teenage son, Walker Murphy, who lives with muscular dystrophy, was at the event, navigating the grounds in a wheel chair with ease.

The grand opening also served as a rededication of the playground to Danielle Martinez Reyes, the 5-year-old daughter of a longtime city employee who died on Jan. 2, 1997. Her parents, Art Reyes and Kathleen Martinez, unveiled a plaque in her honor on the playground’s welcome sign. Former Merced City Councilwoman Nellie McGarry, who knew the child, also shared a story about her life.

The new play structure features a wilderness theme, and even bears an interactive play meter for wildfire prevention. There are various levels, with curvy slides. Some features on the ground spin, others can be used to play music.

The improvement has been a long time coming, ever since the site closed more than a year ago. The previous equipment was 20 years old and had structural issues.

The City Council became involved and invited residents to pick out the new design. They were also able to secure some grant funding, along with approved city funds for what was considered by leaders as a priority project.

“This is our centrally located park, with our zoo, our [Kiddieland] train, and our historic Laura’s Fountain,” he said. “People come here to get married, have picnics and hear concerts. … But most of the time they come here to play. Whether it is to play in the skate park, or on the volleyball courts or here in the playground, they just want to play.”

Mayor Murphy’s words come at a time when a group of home owners who live across from the park are trying to improve “quality of life” issues in the neighborhood by promoting more family-style activity, more enforcement of laws to prevent criminal behavior such as drug dealing and prostitution, and strategies to curb “camping,” excessive storage of belongings, blocked pathways and unleashed dogs.