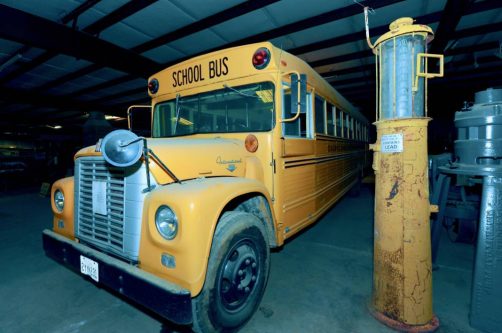 This is the Dairyland Union School District bus that was carrying 26 children who were kidnapped along with their bus driver in Chowchilla back in 1976. 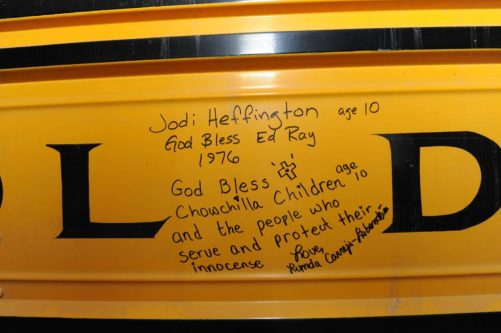 During memorial events, the survivors of the kidnapping left messages on the side of the bus.

An Aveling Porter steam tractor built in England in 1873. 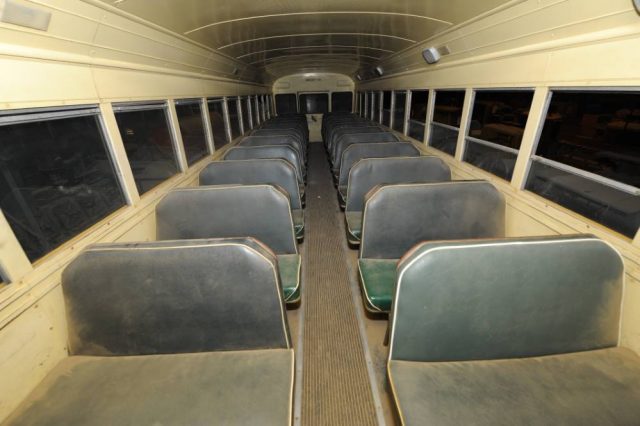 The interior of the bus where the horror unfolded: At around 4 p.m., on July 16, 1976, three masked men with guns hijacked the vehicle as it made its way to the children’s homes after summer school. 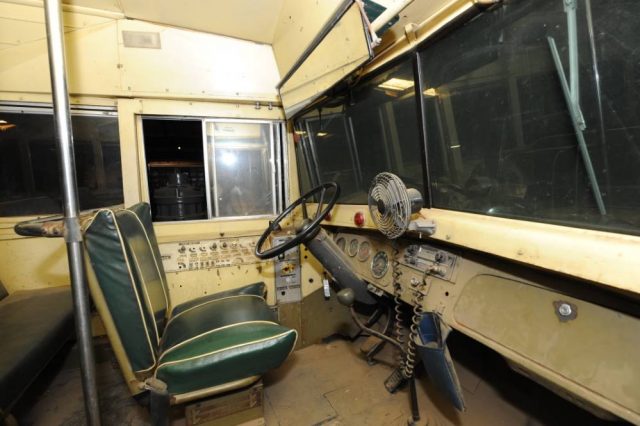 Way out on Plainsburg Road, about a couple miles each way between Highway 99 and the town of Le Grand, there’s a huge metal building — a warehouse, if you will — that’s the exact size of a football field.

It’s surrounded by rows and rows of almond trees, and the workshops of the old Bright’s Nursery operation established in 1945.

Most people who might happen to pass by this off-the-beaten-track location would never guess there’s an authentic history museum inside.

“People don’t care anymore,” said Jim “Jimbo” Bright as he walked through the place. “When I was younger, we used to get visitors all the time, seven days a week. I would drop what I was doing and show them around. We had to replace the guest book constantly. … Now, there’s only a handful of people who are interested. Mostly international collectors, history buffs or someone trying to figure out how to restore an old tractor or engine. … It’s kind of sad, but that is how life is.”

The 53-year-old Bright is the grandson of Arthur Bright, a lifelong Plainsburg resident and farmer who started collecting tractors and ag equipment in the 1960s when he realized he didn’t want to sale or scrap his original Cletrac tractor. His passion for finding gems of farm machinery grew until the entire Bright family found themselves running a full-fledged, non-profit history museum.

However, the one vehicle in the museum that has attracted the most curiosity over the years is actually not all that old, and has nothing to with agriculture really, but everything to do with the local rural community.

It’s a school bus. But not just any school bus. It’s the one that was carrying 26 children and a bus driver when they were all kidnapped in Chowchilla on July 15, 1976. The mass kidnapping is considered the largest in U.S. history, and perhaps the most shocking. The children, ages 5 to 14, and driver Edward Ray, were driven about 100 miles to a remote quarry near Livermore, where the three kidnappers ordered their victims into a moving van buried six feet underground. There was a little bit of food and water, and a poor ventilation tube, but the roof of the van began to cave in while the victims endured 16 hours in dark deplorable conditions in the heat of the Central Valley summer. With an amazing will to survive, the driver and children eventually dug themselves out and escaped.

This is an infamous story, of course, and it captured the attention of people throughout the world. Ed Ray became a hero in Chowchilla and the local area. He obtained possession of the school bus, but later in life, he found himself without a place to store it. That’s when he approached the Brights to see if they were interested in it.

“Everybody in town knew Ed because he was a hay guy,” Jimbo Bright recalled. “He had a boom truck. He grew and hauled alfalfa hay, as well as drive that school bus.”

The bus became quite the attraction. Many TV crews have filmed at the location, including for an episode of the Travel Channel’s “Mysteries at the Museum” series. The bus has also been driven to a few events to remember Ray and commemorate his heroism. Many of the former schoolchildren he helped save have written signed messages on the side of the vehicle.

Last week, interest in the bus was revived again when Fred Woods, the last Chowchilla kidnapper in prison, was granted parole.

Bright said a few journalists and a local TV station visited the museum in recent days for images of the bus, while several national news agencies used file footage of it.

The kidnapping case continues to draw a significant amount of raw emotions in the local community, Bright mentions. He said some, including himself, wish the kidnappers would have been put to death for what they did.

“They left those kids to die,” Bright pointed out.

Instead, the kidnappers were all sentenced to life “with the possibility of parole.” The State of California granted kidnapper Richard Schoenfeld parole in June 2012. Three years later, his brother James was paroled. Woods was granted parole on Aug. 17 after 17 previous denials.

Bright said he still runs into victims of the kidnapping every now and then. One of them works at a local dental clinic. The father of another survivor “was one of my ag welding teachers at Le Grand High,” he added.

While the recent interest in the Chowchilla kidnapping story is already fading in the fast-moving national news cycle, Bright said his family’s museum will carry on as always.

In fact, his grandfather’s prize collection is still on display — not the bus, but an Aveling Porter steam tractor built in England in 1873. It’s one of oldest surviving tractors in the world, and the only other one of its kind is in England. Bright claims the Queen of England owns the other one. There’s also an extremely rare 1926 Rumley pickup truck, among hundreds of other trucks, tractors, cars, wagons, motorbikes and other vehicles. Many of the best collections are considered “priceless.” There’s also other eye-catching attractions — like the largest steer horn collection you’ll ever see.

“We don’t take care of it like some museums,” Bright said. “You might get a little dirty, but you are welcome to come here.”

Bright’s Nursery is no longer in complete operation. The museum is on site, as well as some offices and an impressive farm machine manufacturing shop that Jimbo Bright continues to operate. He says close family members continue to farm almonds in the surrounding land.

“The family is going to keep the museum as is,” Bright said. “If the gates are open during the day, just look for ‘Jimbo,’ and he will give you a quick tour. People can also call my aunt Virginia, and then she will call me.”

But anyone can Google the museum too. It’s known as Bright’s Pioneer Exhibit on the internet. There you will find several brief entries about the location, an address, and maybe a phone number that someone will answer.

One giant leap for Le Grand’s Class of ’69

The Pride of Bulldog Country