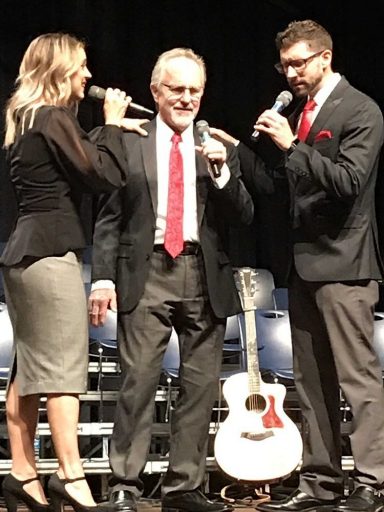 Noel Rykert-Larosa, Joe Rykert and Joseph Paul Rykert perform as The Rykert Trio.  Joe, the father, enlisted the help of his daughter and son as back-up singers after being diagnosed with lymphoma, and the three formed a music ministry. 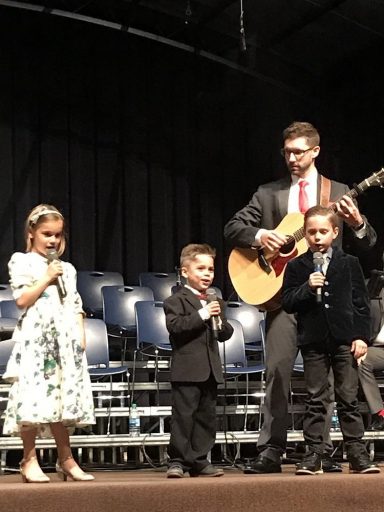 The Tiny Trio, made up of Noel Rykert-Larosa’s three children, perform with Joseph Paul Rykert, their uncle. 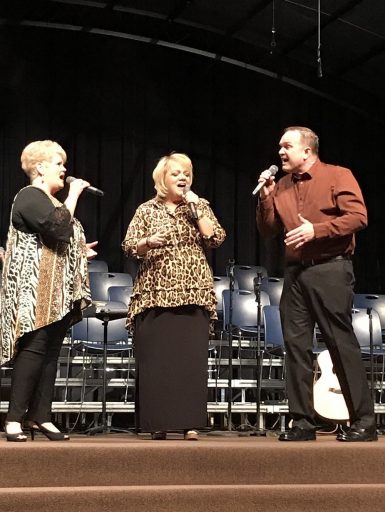 Christian Life Center (“CLC”) in Merced was the site of an inspiring two-hour long Southern Gospel and Country music concert, Julie N Friends, on the evening of Sept. 29.

After a prayer and the singing of the National Anthem, four Christian groups performed — Gospel Road Quartet, Sheri Stambaugh & Julie Eichelberger, The Rykert Trio, and Bridge of Grace.

The Rykert Trio from Modesto, made up of Joe Rykert, Noel Rykert-Larosa, and Joseph Paul Rykert, are a father/daughter/son trio.

The father, Joe, shared that they had not always been a singing family, and that the way the group came together is that four years ago he was diagnosed with Stage 4 Lymphoma. He was supposed to get chemo three days before he was scheduled to sing at an Easter service. His doctor told him he would have side effects from the intense dose of chemo, so Joe feared he would not have the strength or power to sing to the best of his ability. He had always been a soloist, but now he thought to reach out to his adult children and ask them to back him up by singing with him at the service.  They did, and they’ve been singing together ever since. And his cancer went into remission, so they plan to continue on with their music ministry. With the realization that maybe the cancer was a way God used to get his attention and because of the joy of being in the trio with his kids, Joe actually looks upon his life as being blessed.

Besides many outstanding songs as a trio, Joe’s son and daughter, Joseph Paul and Noel, sang a beautiful duet, “The Prayer”, which is the group’s most popular song.

Noel’s three young children who are very cute and are known as The Tiny Trio, also performed with Joseph Paul.

Julie Eichelberger, who founded the concerts at CLC, sang with Sheri Stambaugth and with Bridge of Grace.

She said, “We’ve been doing the concerts for about five years now at Christian Life Center, when there is a fifth Sunday of the month.  We call the concerts Julie N Friends because I’ve been singing since I could talk, and music is breath for me, and I wanted more people to sing with.

“Wilbur Daniels has concerts every third Friday in Fresno, and they have about 1,200 people in attendance at People’s Church, and Herb Henry out of Modesto does concerts there, and these are my mentors and what I strive to go after.  We’re the Valley people trying to do Christian concerts.

“We give the groups that travel to CLC a little bit of money because we take an offering.  But the groups I’m in take nothing.  We perform to sing praises to God.  Our words to God and about God are our ministry to you.

“I love to sing and be able to share that with people. A lot of the people who sang at the concert, that’s their ministry.

“I also go to churches as a soloist and share my story, and that’s what I think God calls us to do.  When I met my husband, he asked, ‘Are you going to talk before you sing?’ and I said, ‘No’, but I underwent a kidney transplant and after that, I shared what God put on my heart, and now you can’t shut me up.

“I sing a lot of Karen Peck and New River, her group, because a lot of songs she sings tell about life lessons.  For example, one is ‘Hold Me While I Cry’, and when I sing that one, I share that I got a call and they had a kidney for me, and hours later after waiting, the doctor told me, ‘It’s not going to work, go home’, and the song talks about the dark moments we have because we’re human, but God is there to hold us when we cry.

“That’s what I like about Southern Gospel and Country music. There are stories to them, and the stories fit things people have gone through. I don’t sing a song just to sing a song; the song has to have meaning to me. These stories are about God, and they get you through so many things.”

“Going Home with Jesus”, a song performed by Bridge of Grace, was about the end of life being positive.

Describing Bridge of Grace, Eichelberger said, “I had a quartet I sang in, and now I’m in a trio, Bridge of Grace. I met the members on the Praise Team at my church, Gwen Breinig and Darryl Vitato.  I asked them to sing with me, and the concert came up because I wanted to have a place to sing.”

About Gospel Road Quartet, she said, “The country group that performed, Gospel Road, is a quartet out of San Jose.  Steve Curtis is the manager of the group, and the group also includes Dan and Debbie Mackey, who are husband and wife, and Howard Baker.  They hold quarterly concerts in San Jose.  They have a very precious group of people who attend.”

The next Julie N Friends concert at CLC will be held on December 29, and will feature Bridge of Grace and an artist to be announced.