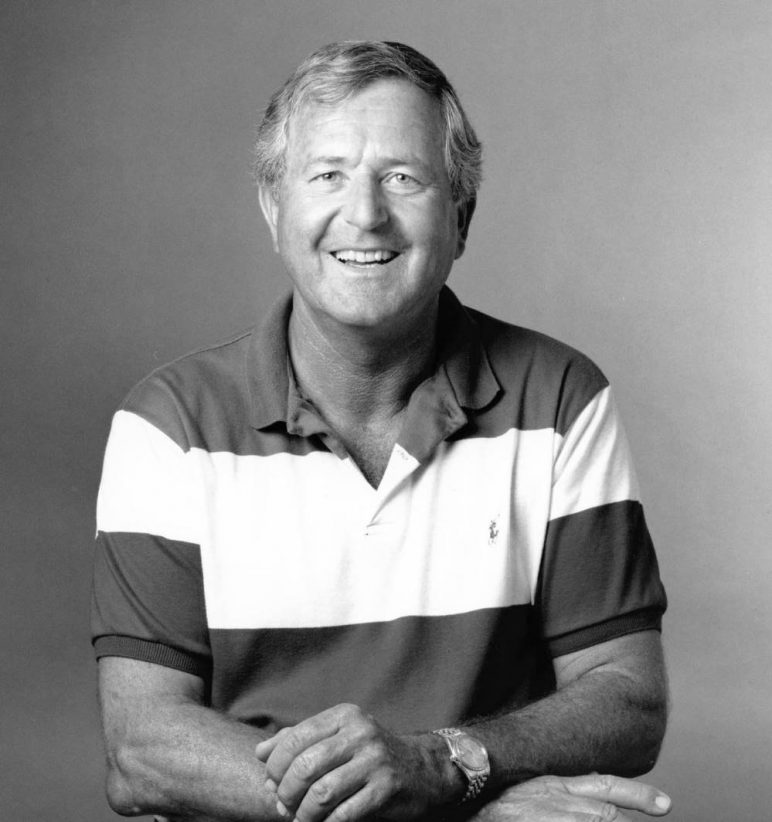 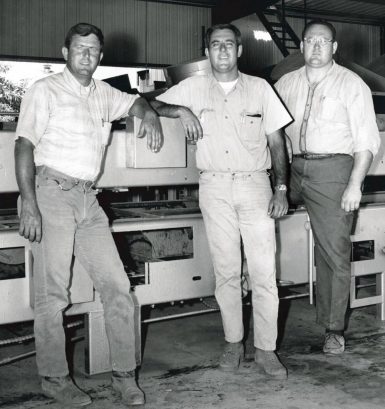 In 1967, Joe Marchini decided to sell his portion of Giampaoli-Marchini, and went into business with his brother Richard. While still farming tomatoes, in the 1970s and ’80s, the Marchini brothers added bell peppers, onions, and almonds to their product line. 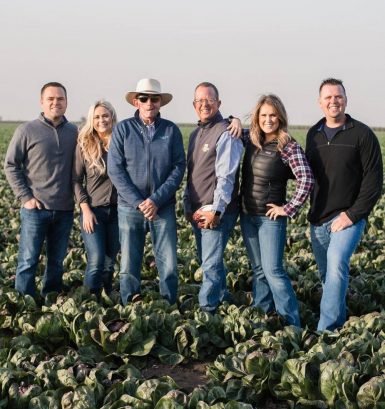 Three generations of Marchini family members in the field, including Joe Marchini and his son Jeff at center. 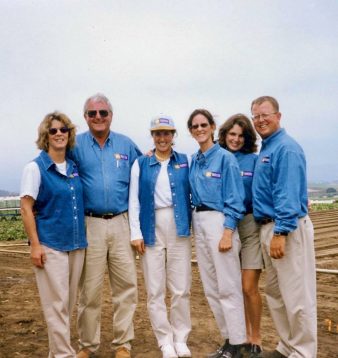 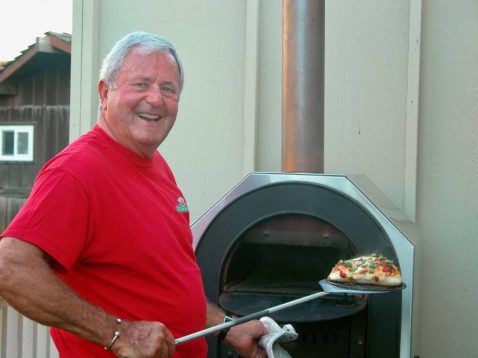 Joe cooking up an Italian delight. 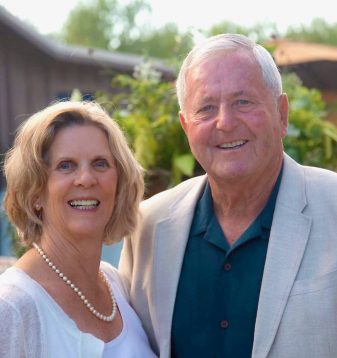 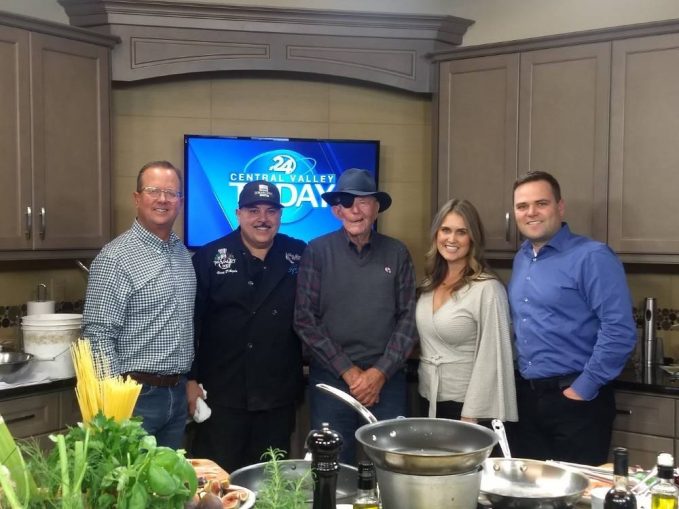 Chef Vinnie DeAngleo with Marchini family members on the set at the studios of KSEE Channel 24 in Fresno. 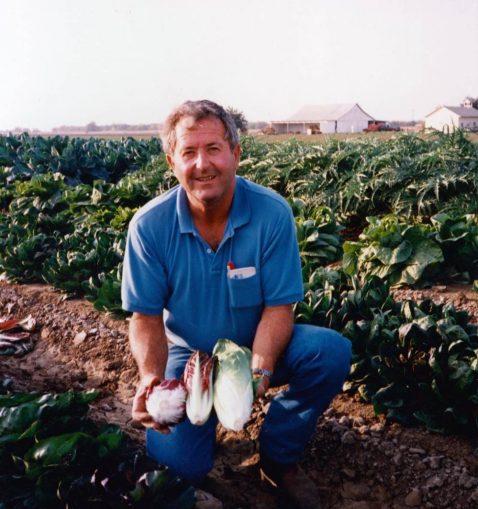 In his garden, Joe Marchini started experimenting with a lettuce seed from Italy called radicchio, which made him the original radicchio grower in the United States.

Words of love, appreciation and fondness are being shared throughout the local community after Joe Marchini passed away on Dec. 28 surrounded by family members at his home in Chowchilla. He was 84.

The founder of J. Marchini Farms was highly regarded as the visionary farmer from Le Grand who transformed and expanded his family’s generations-old farming operation into new markets across America and throughout the world.

Marchini was also known as “the original radicchio grower of the United States,” or the Radicchio King, if you will. He was the Italian-American who successfully brought the wonderful leafy chicory from northern Italy to America’s salad bowl — from the stands of local farmers markets to the dining tables of this country’s most fancy restaurants.

But Joe Marchini will always be remembered in this community for his big heart, his fun-loving and generous ways, his devotion to family, his pride in his Italian roots, his determination, and his hard work.

“If you were fortunate to have Joe Marchini in your life, it was a gift from God,” said Vinnie DeAngelo, a longtime friend and popular local chef who would promote Marchini’s vegetables with culinary creations.

DeAngelo recalled with fondness how Marchini would help create enjoyable cuisine nights on the local scene — including the Mangia! Mangia! Club, which amounted to a banquet room full of friends sharing specialty dishes and Joe’s lessons in Italian language and culture.

“I learned so much from Joe,” DeAngelo said. “We has so much fun, and he was so full of life. He was one of the greatest men I have every known.”

Native-born Mercedian E.J. Lorenzi, who grew up with Marchini, remembers the farming icon as “Mr. Le Grand — a kind, caring, and just a wonderful person and family friend.”

“The thing about Joe,” Lorenzi said, “was that he was a very strong family man who carried on the Marchini tradition. Joe worked hard to continue what his father started, and he created a fantastic family team with his lovely wife, Julie, who he loved with all his heart, and his children and grandchildren who are carrying on his legacy. They are all great partners with the local community.”

Jim Cunningham, a longtime Le Grand resident, described Marchini as a big community supporter. “Joe and his family support many of the church, community and local activities. You could write many words about Joe, but you could just say he was one of the best and will be greatly missed.”

Social media also lit up with emotion upon word of Marchini’s passing.

Ken Thurman wrote: “When a man can leave this world a better place than when he was born into it, that’s a great man.”

Eric Hamm posted: “Talk about a life well-lived. Joe was a force of nature, and he checked all the boxes: loving family man, innovative business leader, and community champion. I’m sad he’s gone, but honored to have known him.”

Joe (Giuseppe) Marchini was the second son of three boys, born to Italian immigrants, Florindo and Elisa Marchini, on Dec. 9, 1938, in Merced, California. The family lived in Le Grand and there they established their American roots where they were surrounded by their close family and friends who had also immigrated from Lucca, Italy, the Giampaoli and Marchini families. Together the families shared special holidays, meals, and memories keeping their Italian traditions alive for generations to come. Joe attended Savannah Elementary School in Le Grand where he was able to learn English since the only language spoken in his home was Italian. Joe often spoke about how he was “just becoming fluent in English” and it was after World War II the family traveled to Italy for a year and when he returned home, he had lost his English language. Once back home in Le Grand, he was sent to St. Mary’s School in Berkley, California to relearn the English language. Joe always liked to brag that he “learned English twice.” His family moved to Merced where he finished his education at Our Lady of Mercy and in 1958, he graduated from Merced High School. Joe’s “formal” education was from the Arthur Murray School of Dance where he learned all of his famous “Joe Man” dance moves.

Soon after graduating from Merced High School, Joe took a trip to Europe with his brother Leonard for a year. Upon returning, he started dating Juliette Thompson whom he later married that following summer in 1960. Together they had 62 years of marriage, three children, ten grandchildren, and eleven great-grandchildren.

Joe’s farming career began at the age of thirteen when he grew his first 11-acre crop of fresh market tomatoes. In the early 1960s, Joe purchased his father’s shares in Giampaoli and Marchini, his family’s tomato and bell pepper farming operation. When Joe wasn’t farming for work, he was tending to his beloved garden. You could always count on Joe to have fresh produce available to friends and family at all times of the year. It was in that very garden where Joe grew his first radicchio crop. Radicchio was Joe’s baby and in the early 1990s, he saw an opportunity for a new market. Joe used his Italian language to bring radicchio seed to the United States from Italy and adopt the Italian growing practices here in the United States. He never missed an opportunity to promote his product, whether it was going in the kitchen firsthand with chefs or talking to buyers at the retail store he was the man on the ground. As the world’s appetite for radicchio grew so did J. Marchini Farms and now Joe’s radicchio is shipped all over the world. Farming just made sense to Joe. Whenever you had soil, rain, and sunshine, you could produce a crop and bring it to market.

Joe was one of the founding members of Minturn Nut Company. Joe had the vision to have a nut processing plant next to the Minturn Huller Co-Op. He called a few of his good friends and pitched the idea. They said yes and the rest is history.

As relationships were everything to Joe, he made them all with limitless generosity and a desire to share his blessing and prosperity with others. In conversations he would lead with a familiar Italian expression, “I know a guy who knows a guy”, knowing that it all starts with bringing people together.

Joe worked hard and played harder. Joe loved snow skiing and built a cabin with his friends. Joe loved to water ski and had the famous jet boat out at Kelsey Lake. Joe enjoyed summers at Sand Dollar beach with family and friends. Everywhere he went he was unpacking a load of produce and those lucky enough to receive his produce glowed with delight.

In 2012, Joe was diagnosed with cancer and given three months to live. Through his faith, pilgrimage to Lourdes, prayers from family and friends, and the amazing team at Stanford, Joe was given 10 and a half more years of life, and lived them to the fullest.