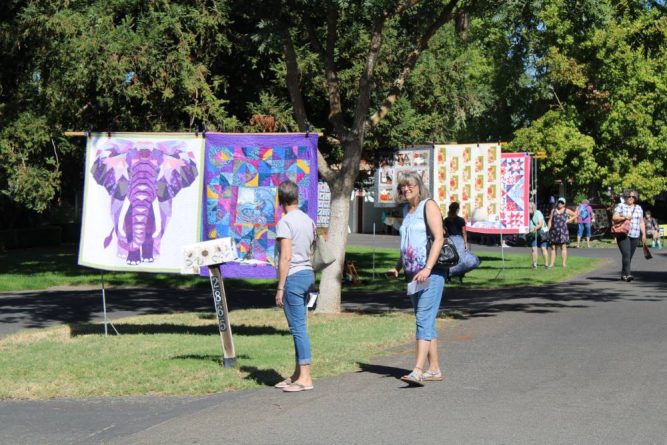 Quilt fans stop near the “Abstract Elephant” pieced by Theresa McIntire, at left, and a Laurel Burch design by Lora Wheeler.

“Minnie Ears” was quilted by Xochitl Morales who made it for her granddaughter Gabriela, a member of the local dance group Studio K that will be traveling to Disneyworld in Florida for a national competition.

As part of the Gateway Quilters’ Guild fundraiser, Mabel Willmon donated this 1921 Singer 66-3 “hand-crank” machine that featured the first drop-in bobbin for the brand. It was in honor of her son Ed Willmon, a gifted local sewing machine repairman who died in 2020.

Featured artists, Judith Dake and Priscilla Hise showed off their works and talked to visitors inside the home of Paula Gleason.

Quilts adorned the lawns all along Forist Lane in central Merced.

They were even hanging from under the eaves of the homes.

“Pick Up Sticks” pieced by Vicky Eisenhart, featuring improvisational slicing and insertions of solid strips. Every block is unique. A prolific quilter, Eisenhart creates more than 50 a year. 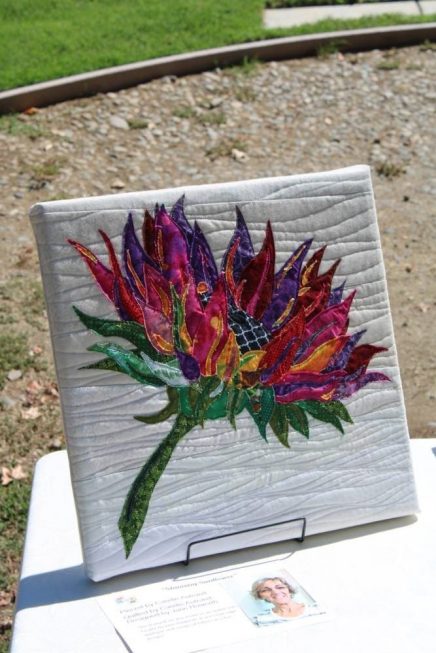 Members of the Gateway Quilters’ Guild must have been working overtime in recent months since they did not have a show during the Covid pandemic.

This year, the Guild’s marquee event — “Quilts On Forist Lane” — featured the skilled work of about 70 local quilters and attracted more than 500 spectators.

“This was the biggest show we have ever had,” said Theresa McIntire of the Guild.

All kinds of colorful quilts were hanging from the majestic trees, under the eaves of the homes, and scattered thoughout the lawns along the lane located in central Merced, just off North Bear Creek Drive.

The weather helped, and cars were parked so far the golf carts taking people to the show were working non-stop.

Judith Dake and Priscilla Hise were this year’s featured artists. They meet weekly to quilt and they had a collection of quilts to share.

The show is not a competition event, however there is one thing the quilters do if they are interested and that is to use 1/4 yard of material in their quilt in some way and they call it a Quilters’ Challenge

The money raised from the event is used to provide hundreds of quilts for community members in need through a program called Quilters’ Embrace.