We’ve heard the politicians and the government officials — from the federal level on down to the town halls — call for the end of homelessness among military veterans.

However, a lot of the heavy lifting, determination, and just plain old will is coming from local nonprofits and landlords who are giving the downtrodden a chance.

It’s not easy, they say. Some of these advocates tell the Times there’s a shortage of local housing units, and even after targeted homeless veterans go through the process of getting some assistance, they face competition from other, more financially stable residents who are looking for the same thing.

Nevertheless, the Merced office of the WestCare organization is finding success identifying homeless veterans and providing opportunities to get them properly housed and back into the workforce if possible.  WestCare outreach workers — through the San Joaquin Valley Veterans project — will organize interviews with landlords or property managers, explain the benefits of giving veterans a helping hand up, and extend services to successful applicants.

Local property manager Renee Davenport says she has housed three local homeless veterans in Merced over the past year though the help of WestCare, and a few others in Winton.

“I have had success renting to these vets,” she said. “I kinda feel like we owe it to them — to give them a chance. I believe vets deserve to get in front of the line. They served our country, and oftentimes we say ‘We appreciate your service,’ but are we really appreciating them? Are we really helping them?”

Two of the veterans Davenport helped were homeless in Merced, and even spent time at the “condos,” a small encampment under the Childs Avenue overpass at Highway 99. The site, previously reported on by the Times, was cleared out last year. Another one of the veterans — 56-year-old Gerald Elkins — was hanging out at Veterans Park in Atwater where he was contacted by WestCare workers.

“I wasn’t trippin,” Elkins told the Times. “I was with some other people who were sleeping under the pavilion, and these two people from WestCare came to the park, and they were helpful. They told us where we needed to go, and how to get things done without all the long lines.”

Elkins served six years in the Army during the 1980s, and he was stationed in Germany. He was also married to a woman who served in the Desert Storm operation, but they later divorced. 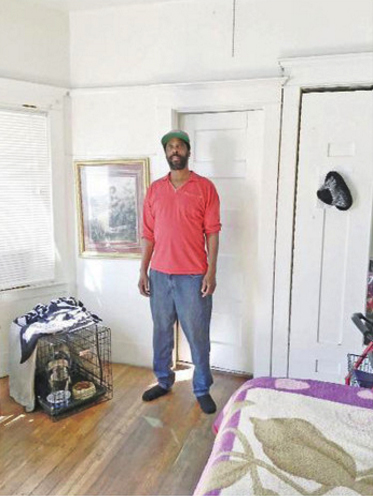 Gerald Elkins, a former homeless veteran, is now in his own apartment in Merced thanks to the efforts by the WestCare organization and an understanding local property manager.

Before Elkins encountered WestCare, he didn’t believe he was eligible for much. He knew he could go to the VA   Clinic or Hospital. He could sometimes catch a bus for free. Stuff like that.

WestCare, however, found several new opportunities for Elkins, and soon the nonprofit was calling local landlords to see if they could set him up with housing. Davenport was among those called. In short, she interviewed Elkins, and said she would take him on as a tenant.  Elkins qualified for some immediate rental assistance, and soon after, he would qualify for the Veterans Affairs Supportive Housing program, known as VASH. Even his little Pug dog “Buddy” was good to go live with him.

That was nine months ago, and today Davenport says: “He is doing great. …  WestCare still councils him. They check up on him. His place is clean, and he keeps it really neat.”

WestCare’s main valley headquarters is in Fresno, but they opened up an office in Merced about three years ago. It operates under a federal grant for supportive services for veteran families.

While they have a presence all over the San Joaquin Valley, they say a lot of places would like to do what Merced is doing with regard to making a concentrated effort to end veteran homelessness.

“We follow the Housing First model,” Leslie Sena, a WestCare advocate in Merced. “We first do an intake to find out eligibility for services. We deal with individuals with very low incomes or no income. Our goals is to quickly get them housed. How are you are going to worry about your other basic needs if you can’t even get a roof over your head? … What are your needs? … Let’s come up with plans … And let’s get you housed.”

Oscar Trejo, a WestCare outreach worker, says one of the challenges is finding an available unit.

“For every place, there are four or five people looking to get in it,” he says. “This is an incredible barrier because homeless people have to compete with people who are employed. So we have to turn around and find creative ways to get our client base housed.”

That means person-to-person interviews to establish a relationship with property managers and landlords, as opposed to just filling out forms in a “dry application process that doesn’t work to their benefit.”

Says Trejo: “We want to stabilize them so that they can eventually help themselves. That’s the goal.”

Another goal is to get to what’s called “Functional Zero” — a place where this area would have a handle on homeless veterans even as more become displaced or arrive from other areas.

“In a dream world that’s what we would like to get to,” Sena says. “We would have established such great relationships with landlords that they would be calling us and asking for the veterans, and saying ‘We have a place.’”

Davenport found a place for the two veterans that were once living under the Childs Avenue overpass, and to her delight, they are both now working to support themselves.

One of them, known as Grover, (he preferred not to give his last name) is an electrician’s assistant.

“WestCare was one of the best things that has happened to me since I have been here in Merced,” Grover told the Times. “Being homeless, and at the age of 57, it’s hard for me to compete with the rest, especially in the cold weather. I want to thank WestCare for being there when I needed them. Every morning I get up and I see the guys on the street all bundled up after a long cold night. I pray to God, ‘Thank you God, that could be me.’”

Grover said he lived homeless on and off for some 15 years, and said he spent months under the Childs Avenue bridge.

“When you live out on the streets, you are cold and wet,” he said. “It’s hard to do anything else during the day but get as comfortable as you can. Most turn to alcohol and drugs, or get thrown to the wayside. Having an apartment when you wake up, you find you are already nice and warm, and you can start your day out nice. That’s what I needed, just a nice, warm place that could serve as my daily jumpstart.

Grover, by the way, served eight years in the U.S. Army. He was stationed in New York and Germany. The service trained him to be a mechanic.

New center for homeless ready to open in Merced