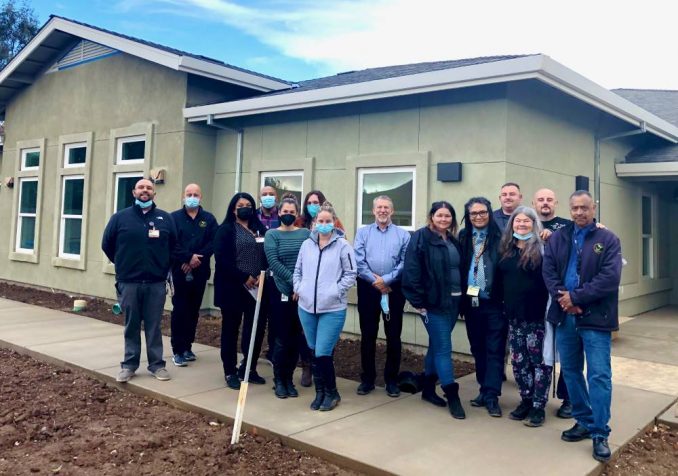 A group of representatives from Dignity Health-Merced and the Merced County Rescue Mission pose outside the new Hope Respite Care facility in south Merced. 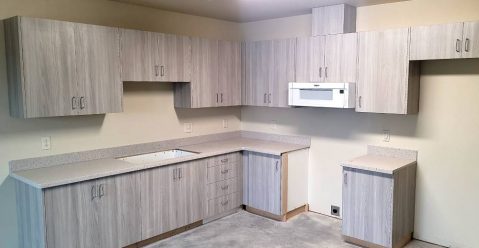 New facilities at the Village of Hope will house 10 homeless veterans in permanent supportive housing, and provide temporary shelter for up to 10 homeless families. They feature one-bedroom, fully-equipped apartments.

Recovery rooms at the Hope Respite Care facility are set up to group four people at a time with shared bathroom facilities.

The first phase of the Merced County Rescue Mission’s new Village of Hope campus in Merced is nearing its final stages of development and is expected to open at the start of the new year.

The grand opening will honor the Mission’s decade-long effort for a larger residential program to help people who are homeless take the next steps toward independence.

“God has done great things because we started with nothing,” says Bruce Metcalf, the Mission’s executive director. “For years and years, the Mission has tried to find land that was acceptable by neighbors, and the city, and the county. And then, about five years ago, we lost the main building that we had on Canal Street, and the Mission was homeless. So we started renting houses to conduct our programs, and then finally in December of 2018 we were able to purchase five acres of land — and without that land, our dream of a new campus was nothing more than a pipe dream.”

The new campus location is in south Merced, between East Childs Avenue and West Cone Avenue, just behind the old Calvary Cemetery. Once the Mission acquired that land, Metcalf says the project started to attract increased community support and much-needed grants.

“It kind of snowballed, and it’s just been incredible how it’s developed,” he says.

The Mission has received a total $4.5 million in grant money from organizations such as the Central California Alliance For Health (the county’s medical provider) and the Dignity Health Medical Group, among others. A groundbreaking ceremony was held in August of 2020, and development immediately started on about three acres. The total cost of the project is estimated to be $7.5 million, and the Mission continues to fundraise to reach that goal.

Meanwhile, the first three buildings on the new campus are almost ready to open. The Hope Respite Care center will be dedicated to recuperative care for homeless people who are discharged hospitalization at Mercy Medical Center.

The building features recovery rooms and bathrooms for 20 men and 12 women. An on-site clinic will be operated by Golden Valley Health Centers. The site also features separate male and female “sobering rooms” that will serve as place where law enforcement officers can bring homeless people who are in need of drug detox. The Mission is working with the county’s Behavioral Health Department, Golden Valley Health Centers and local law enforcement agencies to develop a cooperative agreement to operate the sobering rooms. Sobering rooms, Metcalf says, have had proven success in other cities, and they can be an alternative to expensive hospital stays or even a night in jail.

Hope Respite Care also features a full-on kitchen / cafeteria that can be used as a multipurpose room for other rescue mission programs or events.

Another building near completion features 10 one-bedroom apartments for homeless veterans. The fully-equipped apartments have access to a laundry facility, outdoor patio areas, and the nearby cafeteria. It’s considered permanent supportive housing for veterans, so once the county places a veteran in one of the apartments, the veteran can seek other housing options or stay on the premises indefinitely.

The third building is identical to the one for homeless veterans, only it has 10 one-bedroom apartments dedicated for homeless families with children. At present, local government agencies offer one- to three-week motel vouchers for struggling families who are seeking shelter. The Mission plans to work with county officials to place these families in the apartments where they will have access to kitchens, laundry facilities, and even extra hideaway beds. A children’s playground is also planned outside the apartments. Metcalf says the new facility will improve the process to get homeless families back on their feet and in improved living conditions.

Metcalf says the opening of the Village of Hope campus could not come at a better time. The number of people who are homeless in Merced County has continued to grow. The number of people on waiting lists for Mission programs also continues to grow. And the COVID-19 pandemic has forced closures at other facilities that serve the homeless, including the new Navigation Center that opened last March.

Today, in addition to the new Village of Hope campus, the Merced County Rescue Mission has 24 residential sites across the county to serve the homeless and provide faith-based programming for those men and women who are struggling with addiction. They have about 85 total employees, and will probably hire at least two more for the new campus.

“I believe this new campus belongs to the whole community of Merced and Merced County,” Metcalf says. “It’s really a whole group of people — organizations and government agencies — that have rallied together to make this happen.”

New Year’s Resolutions: Find a local way to enjoy them