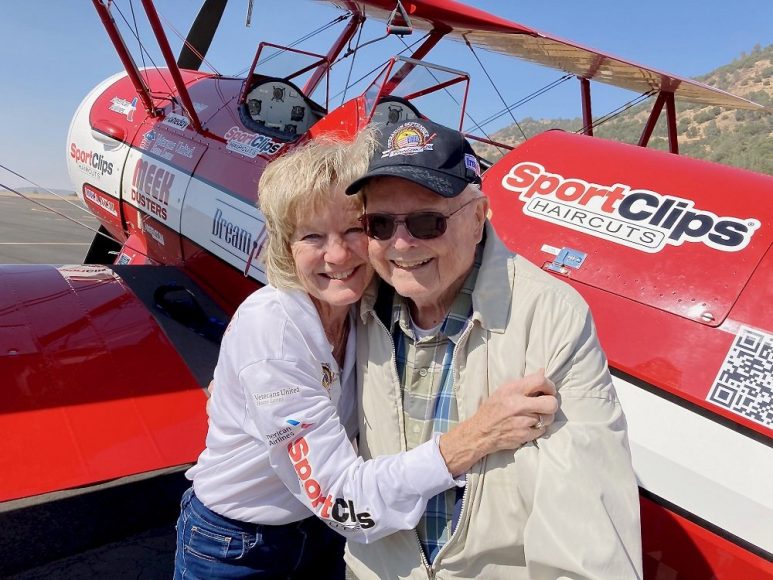 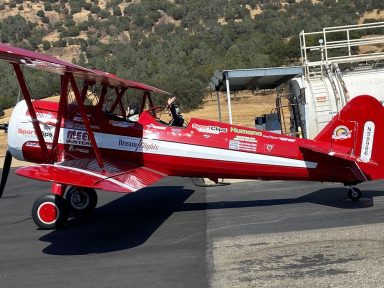 A wave from the pilot before taking off from the Yosemite-Mariposa Airport. 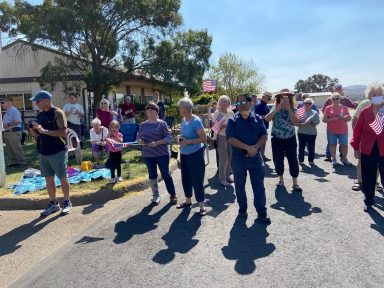 Friends and loved ones wave flags for the honored veterans during Operation September Freedom.

There’s not a dry eye in sight, they say, when the Dream Flights come true.

Dream Flights is a non-profit organization that has provided free vintage plane rides to more than 5,000 military veterans and seniors living in long-term care communities across the United States. Recently, they wrapped up Operation September Freedom — a two month effort to celebrate World War II veterans and offer nearly 900 of them a fantastic trip into the wild blue yonder.

Flags were waving and tears were flowing for 95-year-old Army veteran Ralph Seely and 97-year-old Army Air Corps veteran Robert Stonum during the final flights of the mission on Sept. 30 at the Mariposa-Yosemite Airport in Mount Bullion.

Among the many onlookers caught up in patriotic emotion was the pilot, Molly Flanagan Littlefield, a Merced County native who flew the veterans that day in a restored Boeing Stearman biplane.

Flanagan is a retired airline captain who volunteers for Dream Flights with support from her husband and fellow pilot, Keith Littlefield, who accompanies her on the tour. Flanagan has extensive experience flying the classic Stearman planes, and that’s one of the reasons she jumped at the opportunity. Not to mention, she also honors her father and her husband’s father who were both pilots in World War II.

During the latest two-month operation, Flanagan flew with 60 World War II veterans over locations across America. She has been interviewed by dozens of newspaper reporters, and she always strives to keep the focus on the veterans and their individual stories.

She says it’s a privilege to soar a thousand feet into the air with the heroes who risked their lives to defend this country during the Second World War.

“Now is the time to do it,” Flanagan said.

Of the 16 million Americans who served in World War II, only an estimated 100,000 are alive today. All of them are in their mid-90s or older.

All the Dream Flight veterans receive memorabilia from the event, and they get to sign the tail of the plane they flew in. For many, according to Flanagan, that’s the best part of the day because they can become part of something they shared with so many other veterans of the same age and experience.

The signed tails of all six Stearman planes used in the Operation September Freedom effort will be removed and displayed. Combined, they will make up the largest collection of WWII veterans’ names and signatures.

“It was an amazing experience and the opportunity to speak to and hear from our World War II vets was truly a once in a lifetime privilege,” Flanagan said. “We heard stories that may not have been told in years, if ever. I only wish I could have recorded them.”

Despite the attention to veterans, Flanagan is deserving of some recognition herself (especially from her hometown newspaper) for volunteering her time and skills for such a worthy cause.

Her father, Tom Flanagan, was a flight instructor for the U.S. Army Air Forces during World War II. Back then, the Stearman biplane was used extensively to train military pilots. After the war, Tom returned to the family farm and enthusiastically taught his wife and their six kids how to fly in a surplus Stearman that was purchased from the War Assets Administration.

The Dream Flight in Mariposa was the final flight of the season, so the couple are now back at home in the Seattle area.

However, they don’t plan to stay on the ground too long.

In a recent email, Flanagan wrote with an exclamation point: “We do plan on being pilots and crew for Dream Flights next season!”

For more information, go to: DreamFlights.org.