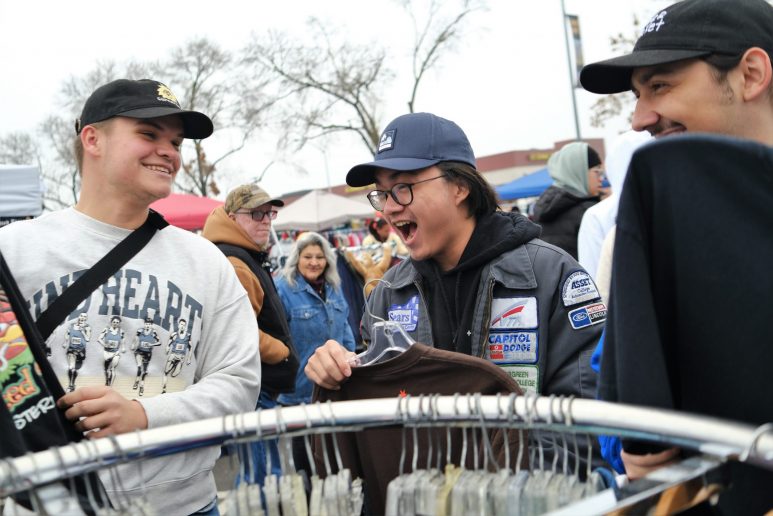 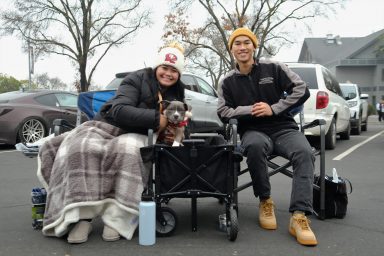 Vendors Kevin and Kaelynne Mendoza and their dog Doza. 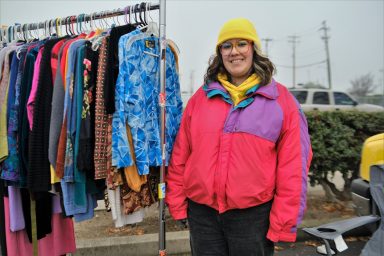 Luna, a thrift vendor from Fresno.

Popular downtown flea market Superflea has crammed a lot of things into one over the past seven months. Craft fair. Art show. Thrift-heaven.

The final installment of the monthly 2022 event was held in mid-December. But don’t worry if you missed it. The creator and downtown business owner Eli Torres is already planning Superflea’s next iteration for 2023.

“It’s been a lot of fun to do it,” Torres says. “I’m still going to be doing vendor events, but they’re gonna be completely different.”

The city will be doing maintenance on Canal Street in 2023 and so the parking lot used by Superflea will be reserved for equipment and work teams. Torres is currently looking for another space, preferably one indoors to avoid the unpredictable weather we’ve been having. Shoppers have sweated it out through 100 degree heat in summer and on Sunday they braved cloudy weather and frigid air.

Despite that, Superflea has only grown in popularity, with much of the hype coming word-of-mouth and through social media. The first event had only 20 vendors, but by June it had doubled and they reached their max around mid-August.

“Every time we would just get more applications,” Torres says. “I would see it go from like, 30 people interested to 60. And then the past few events we’ve gotten about 140 applications.”

Torres is also the owner of several businesses on Main Street, including Grizzly Barber and Pretty Good Burger. His vision for Superflea was to put on a fun event that got people out of the house and into the community.

“My game plan was always just to bring as many people as possible downtown,” he says. “To have something to do, to just walk around. It’s a free event so you don’t have to spend money. It’s a fun reason to get out. That was the whole point.”

The Superflea concept takes the pastime of thrifting to another level. It might strike some as strange to buy clothes and items that have already been thrifted by someone else, but that’s actually where the added value comes in. Vendors that come to the event are often dedicated thrifters, chasing deals in their spare time as a hobby.

“I just look for something that I personally would wear. And then someone else will probably be like, oh, that’s cool. I would wear that too,” says Nathan Taylor, a vendor.

That allows them to offer up special and often rare items that speak to their own unique tastes and interests rather than, say, 50 copies of the same volleyball invitational t-shirt you might be wading through at the local thrift store.

“Usually like you’re waking up at like four or five a.m. to get to the thrift store first,” he says. “It is cutthroat. There have been a couple times where you get nice people. But most of the time it’s like, ‘No! It’s mine!’”

With the number of vendors lining up to sell at Superflea, Torres has had to curate who gets in. A lot of the curating is done through social media, which has made the event popular among college students and high schoolers. Vendors post their finds on their accounts, making it easy to connect with buyers looking for the same styles.

And not all of the people who sell at Superflea are thrifters. Handmade crafts and art have played a big role in Superflea since the beginning, with local artists creating work specifically for the event, often centering around a unique theme. One event featured art drawn only with Sharpie markers, while another theme paid tribute to popular films by the studio A24.

Going into 2023, Torres is already thinking of shaking up the formula. He wants to do a night market style event, with local art playing an even bigger role.

“I want to incorporate more of an art walk kind of experience as well as a thrift one. So that way they’re more separated. People can kind of curate where they wanna look. Here we’ve mixed it up. You kind of have no choice. You’re looking for thrift stuff, but oh, there’s jewelry right next to it.”