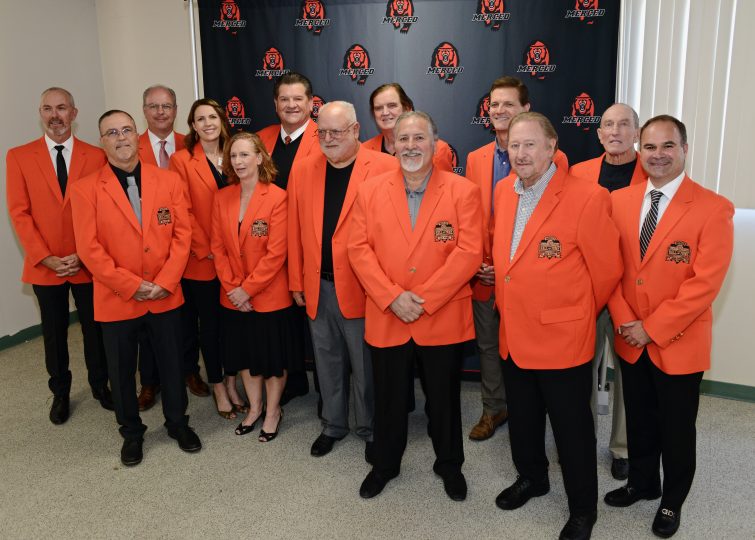 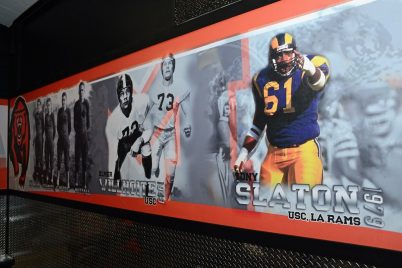 Part of the Hall of Fame mural inside the main weight room at Merced High School displays Bear athletes who worked hard to reach greatness. Merced graphic arts company — Inside Lines — donated their expertise in the making of the mural. 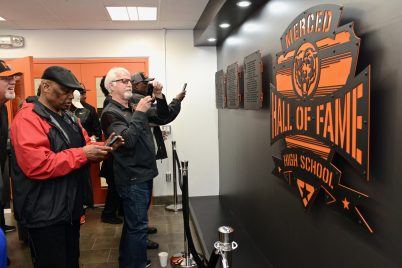 MHS Bears get a close look at the new Hall of Fame shrine inside the gym on campus. 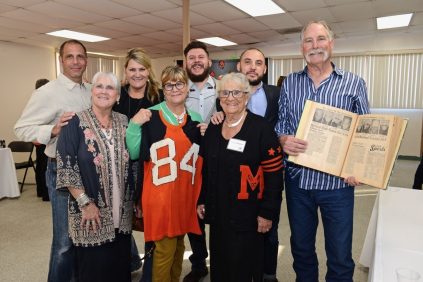 The Melcher family, including Jeanie Melcher, at center left, the wife of Hall of Fame inductee Duane Melcher. Jeanie brought with her Duane’s Merced High School Bear Football jersey dating back to 1949, and a scrapbook filled with sports articles from the time her husband played sports. 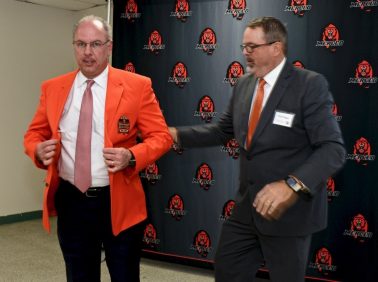 MHS water polo star in the mid-1980s, Michael Osborn, tries on his new Hall of Fame jacket with the help of Paul Hogue, the MHS athletics director. 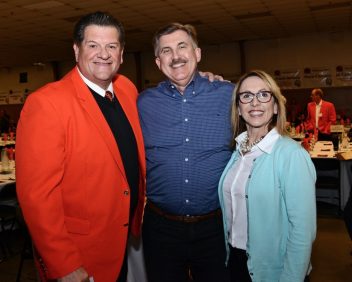 Jeffery Booth, a 1972 MHS grad and Hall of Famer for his football/basketball play, with Scott and Justi Smith of Merced

It was a Hall of Fame weekend.

Paul Hogue, MHS athletic director, also took the opportunity to highlight new “Bear Country” expansion — including a new football stadium — thanks to the Hall of Fame effort and community donations.

“With all the recent high school construction in the region, we want to remind people there’s only one Merced High,” Hogue said.

On the MHS campus Sunday, Hogue and volunteers unveiled a new Hall of Fame shrine inside the entrance to the school’s new gymnasium. A display wall features all the names of the school’s Hall of Fame members, and there’s room to keep the shrine growing for years to come. Future additions could include a video kiosk with profiles of each star athlete. Later, Bear supporters were given a tour of the new mulitpurpose gym that features impressive features and capacities for both athletes and fans.

Hogue then revealed details of the upcoming contruction to create the new Cathy Hostetler Football Stadium. Phase 1 will begin in May on the site of the exisiting practice field behind the new gym.

The first things to take shape will be the main entryway, concession area, and front restrooms. Phase 2, sometime in October, will begin work on the home-side bleachers and press box. The project is expected to be completed in June of 2020.

Kudos goes to the community supporters that made the new Hall of Fame display wall happen inside the gym, including BK Welding, Inside Lines graphics, and Sun Power Powder Coating.