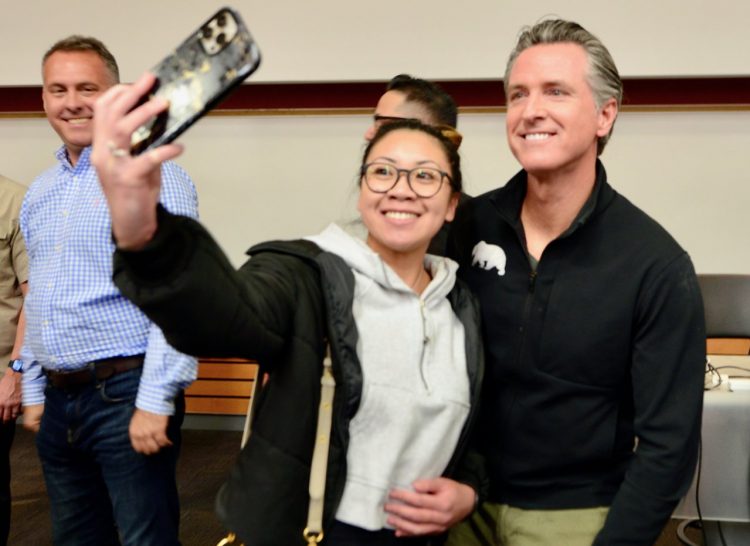 Governor Newsom and a UC Merced student take a photograph together. 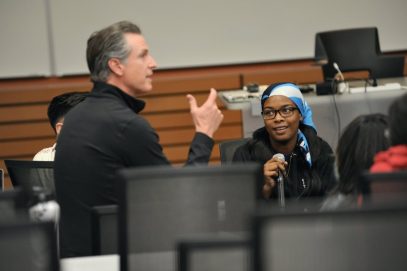 A UC Merced student takes the opportunity to engage with the governor of California after he made a surprise visit to her class. 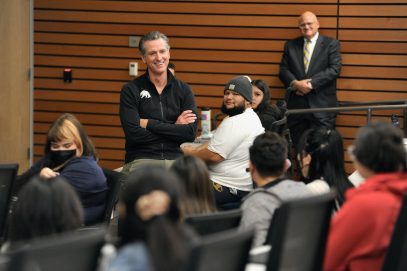 A couple dozen students at  UC Merced  were surprised to find a swarm of local media reporters and photographers when they entered their political science class on Monday afternoon.

State Assemblymember and Congressional hopeful Adam Gray is one of their regular lecturers, so it might have been an educated guess to think that all the media attention was about him.

But then to their surprise, Gov. Gavin Newsom walked in.

It was the eve of the General Election, but Newsom found some time to offer up  a lecture in support of Gray and the university.

He talked about the challenges he’s faced from his days as college student, to being elected mayor in San Francisco, to becoming governor of the entire state. He also interacted with the students, listened to their perspectives, and learned about their legislative roles they take on in their government simulations.

“Relationships still matter,” Newsom told the class. “For all the power in politics, the decision making, the in-fighting — relationships still matter. There are those calls (on issues) that can, quite literally, go either way. And when someone who has developed trust, well that is the coin of the realm. It’s the difference maker.

“You’ve got a guy here, Adam Gray, who — on some of these issues when my advisors and staff have said, ‘I don’t think so’ or ‘Forget that’ — but Adam calls and says, ‘It’s important to me.’ Boom. It’s done. Relationships matter.”

The governor also had a chance to see the university’s newly created Center For Analytic Political Engagement program. The center is a gathering place for the Central Valley’s scholars, students and community leaders and was founded by the Political Science faculty at UC Merced. It aims to enhance a healthy democratic society by advancing responsible civic participation and elevating the voices of the under-represented.