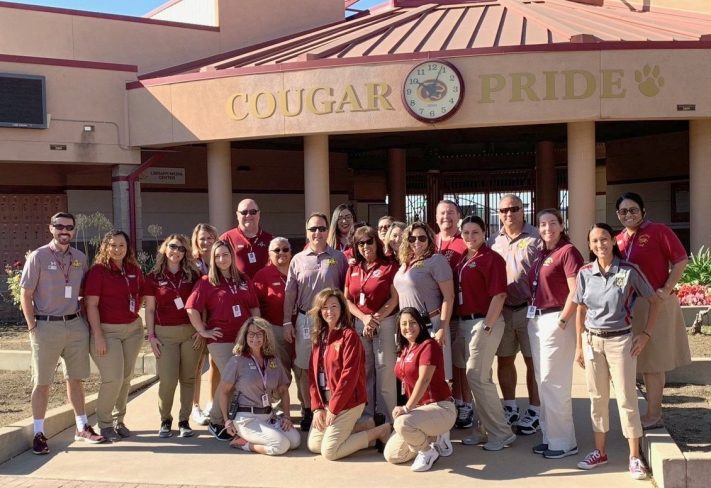 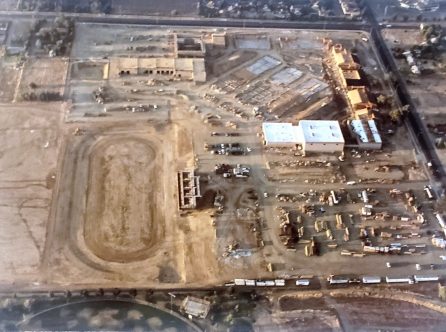 GOLDEN VIEW — A aerial photo of the Golden Valley High School contruction site, including the footprint of Veterans Stadium from September, 1993.

FIELD OF DREAMS — This dirt field with a few palm trees near the Childs and Parsons intersection, seen here in February of 1993, would eventually become the Golden Valley High School campus. 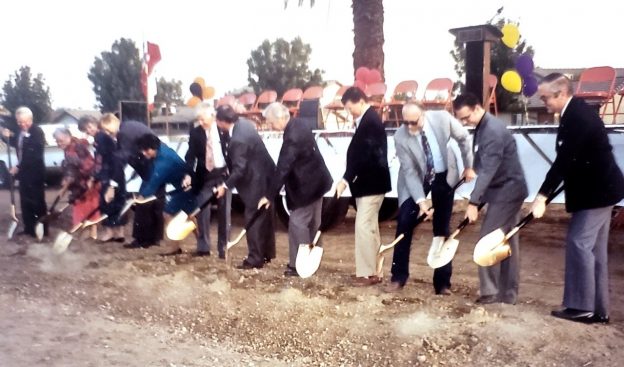 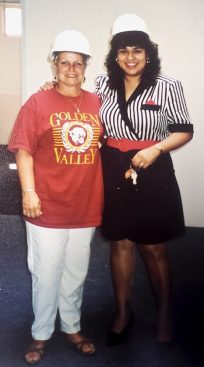 STAFF IN HARD HATS — Donny Ivy, administrative secretary, and Aurora Espinosa, school secretary, back in the spring of 1994. 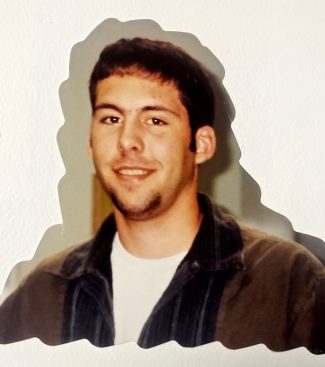 MOST LIKELY TO SUCCEED? — This kid by the name of Adam Gray was a member of Golden Valley’s first graduating class in 1996. He is now Merced County’s representative in the California State Assembly. 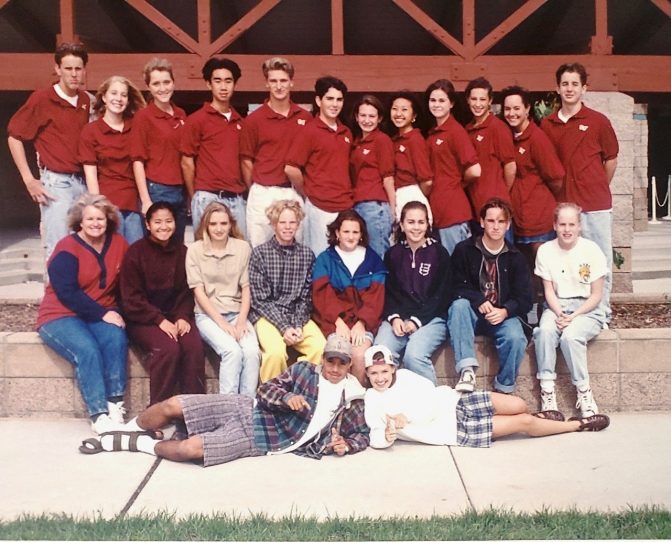 GV PRIDE — The first set of student body officers at Golden Valley High in 1995. If you look closely at the top row, far right, you might recognize the future Merced Mayor Mike Murphy. 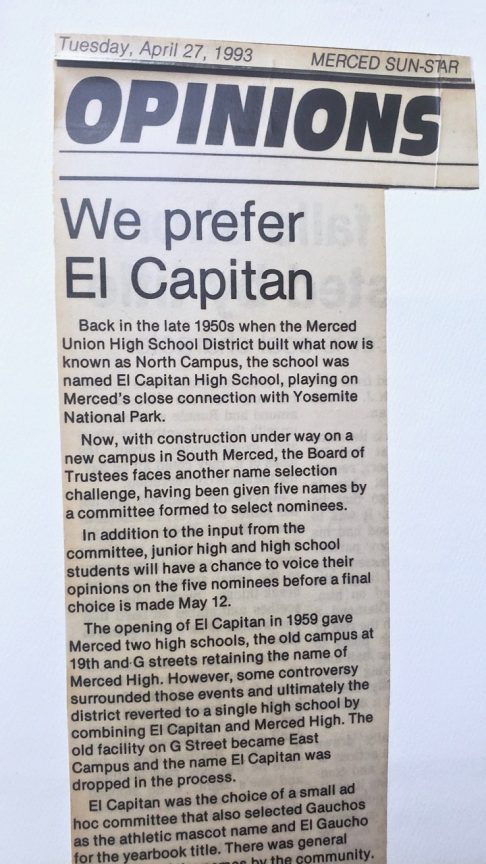 The 1,750-pupil campus at 2125 E. Childs Ave., Merced, has embraced change, improvements and accomplishments over the last quarter century along with a measure of stability.

Kevin Swartwood, Golden Valley principal since 2015 and the school’s first athletic director, said eight teachers from the school’s beginning are still on staff.

The school has 150 staff members, including 75 teachers, five administrators and four counselors and about the same number of students as back when it started.

Ralf Swenson of La Jolla was the school’s first principal and led the school for 12 years. He retired three years ago after having served as a superintendent of two San Diego area high school districts for a half dozen years.

Superintendencies notwithstanding, Swenson told the Times his most enjoyable time in education was as Golden Valley principal. He moved away from this area in 2007.

“It’s been fun to think about such a labor of love from so many people that went into Golden Valley,” Swenson said. “The school’s first honors have just continued on.”

“It was such a family-oriented place; it was a very rewarding experience for me. My kids grew up there,” Aguilar said.
What stands out now, Aguilar reflects, is how much the Golden Valley staff went out of their way to support students.
“It was more than a teaching job. They did anything and everything possible to make sure students succeeded. You couldn’t have asked more of them,” Aguilar said. “It was a really cool place to be.”

Everyone got along with each other; it truly was a familial atmosphere. Students really engaged in campus activities from sunup to sundown, Aguilar mused.

Donna Ivy has been a longtime booster of Golden Valley, from her time as a staff member to her many years of volunteer efforts chronicling the school’s students and their activities on film.

Ivy started out with the high school district when she helped close the Merced High School East Campus office and then helped open Golden Valley, as principal’s secretary. She retired in 2001 but continued her photography and support of student efforts until last year when two back surgeries and arthritis started to limit her activities.

“It was like my family; I love high school kids. The kids made my life,” Ivy said.

In the fall of 2018, the Golden Valley High School Hall of Fame Foundation was formed. Golden Valley’s 25th anniversary will be marked at the foundation’s first public event Feb. 8, 2020 at the Merced County Fairgrounds.

Ten inductees, yet to be announced, will be named to the school’s Hall of Fame.

Swartwood said it is hoped 500 people will be at the 25th anniversary celebration, which will be open to the public. Hall of Fame inductees will include outstanding musicians, actors, athletes, writers and alumni who have contributed to the school’s accomplishments over the years.

Last spring, the foundation gave 24 Golden Valley freshmen  $250 scholarships, which they will be eligible to receive when they graduate. The foundation’s goal is to continue awarding scholarships.

Swartwood, who has been a teacher or coach since 1985, said Golden Valley opened in August 1994 with 1,700 freshmen through sophomores.

Just before this took place Merced High School had almost 4,000 students and the push for new campuses in Merced was under way. Golden Valley was erected first, followed later by El Capitan High School.

Without any seniors, Golden Valley won three of its football games in 1994-95 and was put into the Central California Conference, competing in every single sport available.

In the fall of 1995, the school gained its first seniors who graduated the following spring. The school’s 25th graduating class will be honored next spring.

Swartwood has pictures of the school’s first varsity football team in his office.

As a brand-new teacher, he was hired to teach science at Merced High School in 1985; he also taught at Livingston High School and became a coach at Atwater High School.

He became varsity football coach at Buhach Colony High School in 2006 but jumped at a chance to come back to Golden Valley.

Most features at Golden Valley are the same except for the addition of the competition-sized swimming pool and Veterans Stadium which opened nine years ago. New softball field also have been added.

Golden Valley originally had two large hills which were supposed to be noise barriers in the southeast and northwest quadrants of the campus. These large hills have since been turned into smaller mounds.

Originally all of the trim on Golden Valley buildings was a light green but that has given way to cardinal red colors.
Swartwood thinks the school might have been repainted once in its two-plus decades.

Originally agriculture classes were held at Merced High School East Campus but migrated in the early 2000s to Golden Valley. A greenhouse and entire ag wing now grace the campus.

During his years at Golden Valley, Aguilar said the new swimming pool was just completed, Parsons Avenue was widened and the enrollment dropped from 2,700 students to 1,700 students when El Capitan High opened. A new academic intervention program was added during the fifth period.

Aguilar said many veteran teachers retired or moved to a new school. He said 40 brand-new teachers were added in his four years, and modernization took place to support student-centered learning efforts.

Swartwood said the school’s slogan, Cougar Pride, is well-known. That stands for positivity, respect, integrity, determination and excellence. He stressed it’s not just a tagline — it means something to the students.

“The general flavor hasn’t changed; it’s the same,” Swartwood said. “People here love the school and staff does the best for the kids.”