Future of Atwater’s Veterans Memorial Building up in air 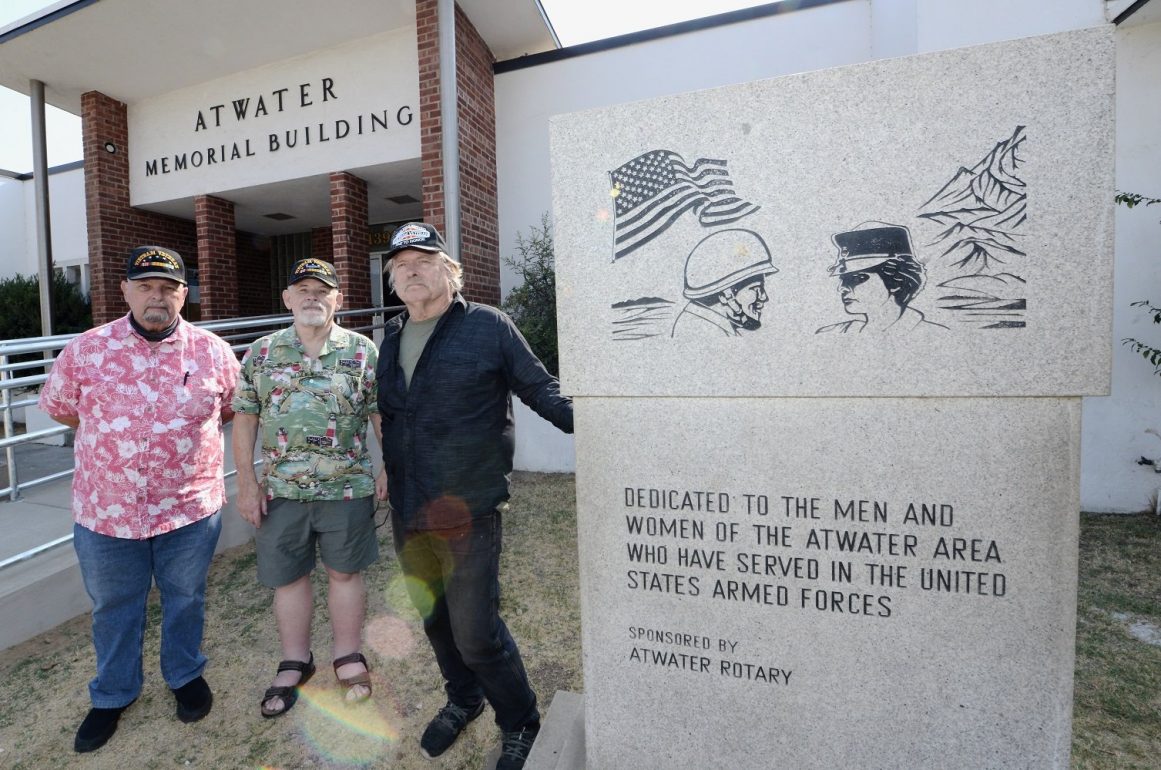 Past commanders of VFW Post 9946, Bob Freitas, Bob Fredericks and David Wade, say the state and national VFW organization broke bylaws when the post’s charter was revoked in August.

Just last year, things were looking up for the Veterans Memorial Building in Atwater.

The Merced County Board of Supervisors — with the help of Supervisor Daron McDaniel — targeted the site for infrastructure upgrades. And VFW Post 9964 — the veterans organization that operated the building — was celebrating its 70th anniversary.

The landmark building in downtown Atwater is known as a veterans meeting place, a rental establishment for various community events, an election polling place, and a centerpiece for the Veterans Day ceremonies and the Christmas Parade.

Behind the scenes, however, some VFW members say they knew the place was heading for trouble more than a year ago. Others say they were done wrong by abrupt action on behalf of state and national VFW officials.

If this year’s COVID-19 pandemic and subsequent closure of public places was bad enough, VFW Post 9946 officially lost its charter to operate on Aug. 28. State VFW officials came to Atwater and changed the locks. With the exception of work crews renovating the interior, no one has been allowed inside.

The most recent post commander, Bob Fredericks, along with past post leaders Bob Freitas and David Wade — all veterans of the Vietnam War — claim the VFW’s top brass acted in haste and violated the national organization’s own bylaws by not giving the post adequate time to respond to complaints, and by denying an appeal of the decision to revoke the charter.

Fredericks showed the Times documents, including letters from officials and a copy of the VFW bylaws, to prove his points.

“It’s necessary for the community to understand what is happening,” Fredericks told the Times. “They have closed us illegally. They don’t want us to operate. They don’t like Vietnam veterans, and they don’t like anybody who is doing anything that is contrary to what they believe is the right thing.”

Fredericks, Freitas and Wade defended Post 9946 for keeping an active membership that has continued to organize community events, host popular fundraisers like “Hamburger Night,” and participate in veterans ceremonies on holidays. They also said they have dipped into their own pockets for funds to keep the place up and running.

Fredericks said the VFW organization “had it in for them for years,” and that past meetings involving regional leaders and the local post had been heated and marked by personal disagreements.

Said Wade, “I don’t know why they came down on us. There are things we are supposed to be doing as a VFW throughout the year, and we were doing those things, but they would still get down on us for not concentrating all our efforts on their programming. … Our post has been a mainstay of this community for more than 70 years. When we celebrated our 70th anniversary last year, no one from the state level came to celebrate with us.”

The trio of veterans hinted at some sort of legal action that might be taken soon over how the post was closed.

Meanwhile, several other members and past leaders of Post 9946 told the Times they weren’t surprised by how their charter was revoked.

In fact, they were expecting something of the sort.

Louie Garcia, a past commander, and Chris Martin, of the corresponding Auxiliary unit, both pointed to management woes in recent years and an assertion that local leadership did not heed various warnings from top officials in the organization to maintain VFW standards.

Mike Maynor, a past district commander, posted the following on Facebook: “The post was closed and charter revoked by the VFW National Organization for failure to abide by the National, Department and District by-laws, failure to participate in the programs, and for being placed on suspension nearly every other year for the past 7-8 years. … Honestly, the post was given numerous opportunities and in person guidance to make corrections but the comrades (veterans) didn’t take the bull by the horns and make those corrections.”

The Times talked to Kevin Aqueche, the VFW’s current District 13 Commander, and he said the reason post’s charter was revoked was simple.

“You have to follow the rules,” he said. “If you don’t, the VFW will not allow you to put its emblem on the doors.”

Aqueche did not want to comment on specific issues, but he suggested the problems date back some time.

One thing all sides agree upon: The Victor S Machado Post 9946 is not coming back.

“It will never be the Victor S. Machado post again,” said Philip Bettencourt, a distant relative of the post’s namesake. “It upsets me. They should have followed the books and corrected the situation before the national organization got involved.”

Fredericks counters by saying: “If members were concerned about the post, why didn’t they get involved?”

Freitas and Wade say they want nothing to do anymore with the state or national VFW authorities. They want to head up a new veterans support organization in the very same spot.

Likewise, Michael Pacheco, the current commander of the Disabled American Veterans association, is interested in opening a chapter at the location.

Also, there has been interest in creating a joint Atwater-Merced VFW post that would included Post 4327 members in Merced. Those Merced VFW veterans are also in search of a home after they lost their so-called “hut” headquarters outside the Veterans Hall on Main Street.

The Atwater VFW Auxiliary that was linked to the Post 9946 wants to change their name to Atwater Friends of Veterans.

Aqueche said it’s entirely possible to create a new VFW post at the site, but it’s not an easy process. Rules have to be followed, and there needs to be a certain number of members. It could take several months, he said.

He added that the Disabled American Veterans group has a good chance of moving in sooner, and maybe paving a way for a new VFW post.

Ultimately, the Merced County Board of Supervisors has a say in the matter. The building is owned by the county. They lease it out as a place designated to serve veterans. Supervisors would have to OK a new tenant.

“I want to see the building back open for veterans to use,” Supervisor Daron McDaniel told the Times. “Our local veterans are trying to work it through. Our county counsel is working on some things. We are hoping this gets resolved soon.”