For The Love Of Orphan Cars

Growing up more than 50 years ago, Robin Shepard has always liked unusual, no-longer-made American cars. He came by this zeal for “orphan” cars naturally as his father James loved Packards, Studebakers, and Henry J automobiles.

“I like ‘orphan’ cars; I don’t look for a Chevy or a Ford and I am really glad I did some research on them,” Shepard said.

This research led him two years ago to a 1953 Kaiser Manhattan four-door sedan that had been “resto-modded” by noted builder Keith Dean of Hemet. The car features a modern suspension, drivetrain and other mechanical upgrades while its unusual styling features were left untouched and the final appearance subtly enhanced by a lustrous paint job.

“Why would I want a Kaiser? My dad loved strange, orphan cars. I learned to drive on a Volkswagen Karmann Ghia and a Fiat 850 Spyder two-seat roadster. I had my sights set originally on a 1953 Kaiser Dragon, the top-of-the-line car from Kaiser which was personalized with a vinyl top and a custom interior with a tiki motif. That didn’t work out but later I read an ad in Hemmings Motor News for this car and I gave the owner a call. I told him I was really interested in the car and later gave him what he wanted for it,” Shepard said.

Keith “Kid” Dean of South End Customs in Southern California is the son of the late Dick Dean, who built many of the famous 1950s show cars and customs created by legendary customizer George Barris. Keith Dean has built his own following with one-off builds of older vehicles, featuring modern drivetrains and meticulous bodywork.

Shepard, 64, retired from Merced College three years ago after 23 years’ service. His family came to this area in 1965 when his father was stationed at Castle Air Force Base.

Shipbuilding industrialist Henry J. Kaiser and his partner Joseph Frazer built automobiles from 1947 to 1955 and the make continued on for nearly a decade afterwards in Argentina. The Kaiser Manhattan was marked by a distinctive scalloped or butterfly-shaped crest in the front of the roofline fore and aft, a stylish taillight treatment and prominent chromed bumpers.

Shepard’s Kaiser has had its chassis channeled and dropped four inches over a 1987 Chevrolet El Camino frame. Its engine is a 350 cubic-inch Chevrolet V-8 with a 700-R4 transmission and 770 rear end gears.

The result is the car cruises smoothly and effortlessly on city streets and highways, more than able to keep up with other traffic.

“Externally it’s stock. It has a subtle two-tone metallic silver paint job, with the top a darker gray. It really sparkles. I haven’t had any major mechanical issues. As I’m driving or stopped at a light, people will frequently honk or give the thumbs-up. I would make a pitch to the younger guys to consider these orphan cars. In the years to come I am not sure who will want these cars,” Shepard says.

Shepard is not sure of the car’s original mileage but said it now has about 5,000 miles following the major restoration that Dean performed. He said he can drive it anywhere but because of its low ground clearance he has to be careful to avoid scraping the bumpers and suspension on driveways or dips in the road.

With a coilover suspension, an improved sound system and aftermarket air conditioning, the Kaiser lacks nothing as far as Shepard is concerned. Its interior sports a two-tone matching gray cloth upholstery pattern. The dashboard features a speedometer cluster insert from a 1955 Ford Thunderbird which was seamlessly grafted into the dash panel.

The Kaiser has a chromed hood ornament that mimics a jet plane. The hood and trunk have gold V-8 crests and the front and rear bumpers have “dagmar” overriders. Its stock hubcaps have a prominent K insignia in the center of the wheel.

In the past Shepard has owned two French Citroen automobiles and a Peugeot 504 sedan which he wishes he hadn’t sold. About four years ago he bought a 1949 Studebaker Champion which is presently in the middle of a major rebuild.

What other old cars does Shepard think about owning? He wants a car that looks like a rocketship, something with the flamboyant tailfins found on late 1950s Chrysler Corp. products.

But for now, with the Kaiser serving him faithfully and the Studebaker likely to emerge from restoration in the near future, Shepard gets to indulge his reverence for orphan vehicles that plied the roads a half-century ago — and enjoy the waves of people who aren’t sure what they are looking at. 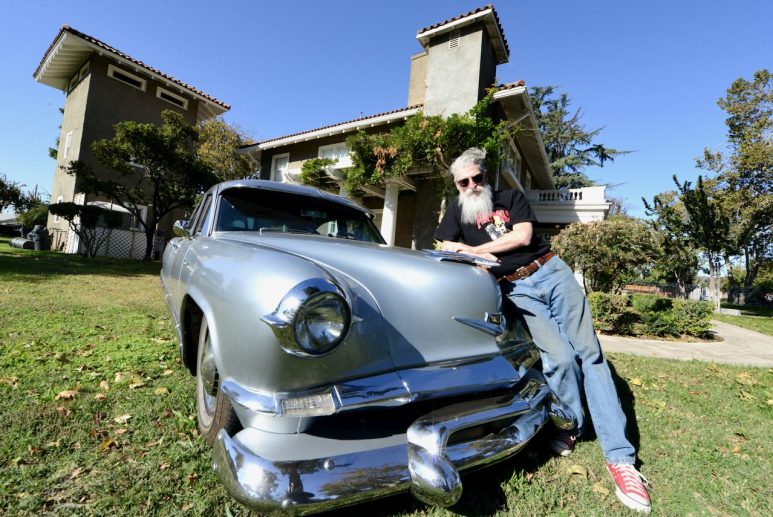 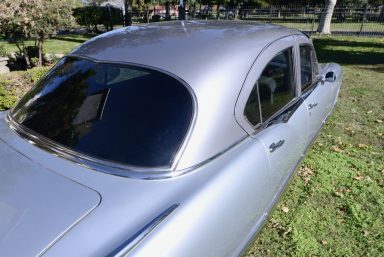 The Kaiser’s unique and stylish peaks and dips can be seen at the top of the back window and along the back passenger door. 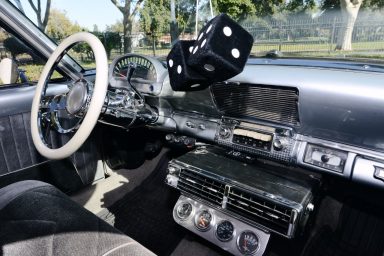 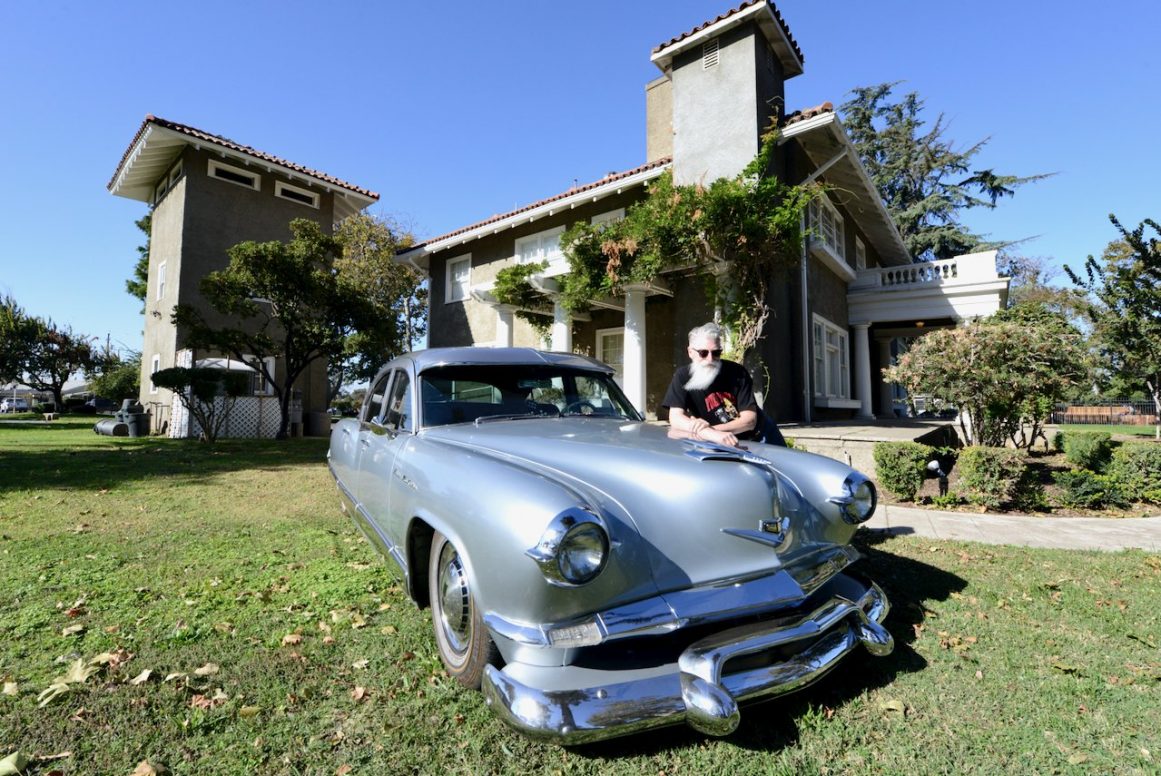