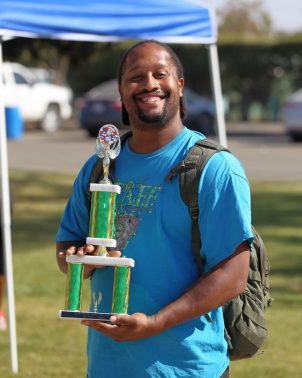 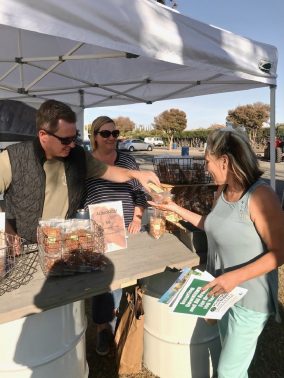 Brad and Stacey Humble, owners of Roberts Ferry Nut Co. in Waterford, shared some “pumpkin pie almonds” they were displaying with a customer during the Merced County Nut Festival. 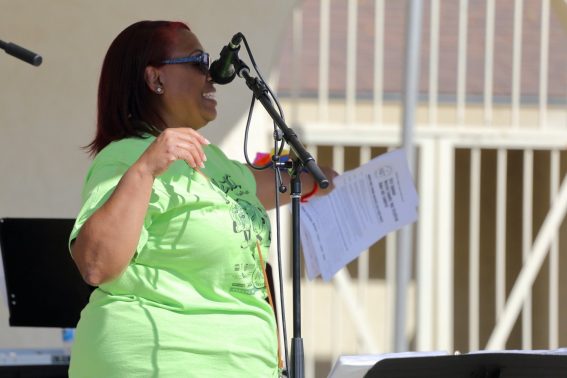 Event organizer Necola Adams speaks to members of the crowd as she readies the awards. 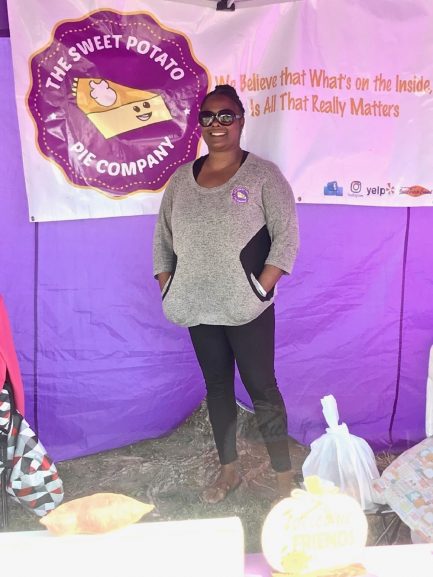 Catrice Prince-Claxton, owner of The Sweet Potato Pie Company from Modesto, was another unique vendor at the Nut Festival. 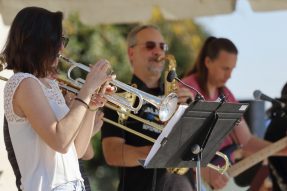 The G Street Revolution performs for those attending the event. 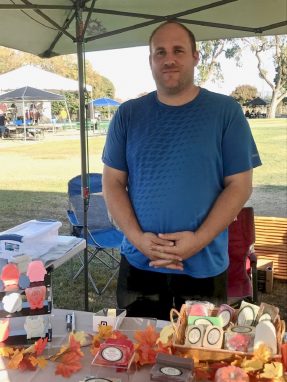 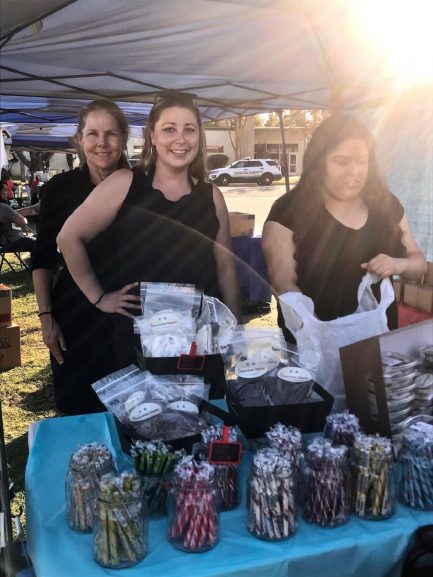 At the Nut Festival, Brittney Lowe (center), owner of The Chocolate Dipper in downtown Merced, sold her famous candy apples, which are Nordic apples with a variety of delicious toppings.

Visitors enjoyed live music, such as the G Street Revolution, a local band, and there were raffles to participate in.

A festive and fun aspect of the event was the Knight’s Express train riding guests around the perimeter of the festival for $5 per ticket.

There are nuts in every part of the County — the kind that grow on trees, that is — and that is what unites us, according to Necola Adams, organizer of the first Nut Festival.

Finding a theme that unites the county’s citizens is something she became interested in when running for the office of Mayor of Merced in 2016.

She told the Times, “I’ve been talking about this for over three years. When running for mayor, I was looking for something that unites us.”

Although she wasn’t elected mayor, she still wanted to do something to celebrate the area’s farming heritage relating to almonds, pistachios and walnuts.

She said, “I thought, ‘We need to value not only the growers, but the processors, those who irrigate, those who sell tractors, manual laborers – – the hundreds of thousands of people who get forgotten.’”

The profits from the Nut Festival, except for some money to be put back into the festival for next year, will go to non-profits throughout the County.

Adams hopes to give funds to those non-profits which seek to improve the quality of life for children by offering to teach them a new skill or something else of value.

She said, “They have to request the funds, and have a specific purpose for them, like teaching kids culinary skills or teaching them film-making.”

Brad and Stacey Humble, who own the business located on Highway 132 between Waterford and La Grange, told the Times it was founded in 1983 in the historic Gold Rush community of Roberts Ferry.  It was famous locally for its milk shakes and goodies.

Stacey and Kim Kollmeyer, who are sisters, and their husbands, Brad Humble and Nic West, bought the business in 2015.  The sisters, who are sixth generation residents of Roberts Ferry, remembered the fun they had working summer jobs at the nut company and decided its traditions would be carried on, and they would make sure the business grew and prospered under their care.

They wrote, “We’re delighted to celebrate and share with you the delicious bounty of California’s agricultural food basket through creating awesomely delicious goodies.”

Stacey Humble, who was the Vice President of Global Marketing and Communications for the Almond Board for 21 years, shared some almond facts.

She confided, “All the almonds grown in California are grown from Bakersfield to Chico.  That area grows 80% of the world’s almonds.

“There are a lot of consumers in China and India where there is a lot of value in almonds as snacks and gifts and Western Europe has long been an export destination, but the single largest market for almonds is the United States.

“Almonds have always been in the top 5 of the County’s ag production.

“San Luis Obispo was the first place in California to grow almonds.”

Another interesting vendor at the Nut Festival was Green Valley Soaps owned by Reno Bianchi.  His bars of soap smelled exactly like what their names suggested.

Bianchi made his almond bar from sweet almond oil, and his Bee Bar from bee pollen and honey.

Other products were the Cashmere bar that smelled like a Cashmere sweater, the Pumpkin bar which was in the shape of a pumpkin, and the Dirty Bar Line.

He laughed, “The Dirt bar is for people who go hunting.”

In order to lure animals and birds, they don’t want to smell human or smell like a fragrance, so they use the Dirt bar so they will smell like dirt.

There was another bar of soap called Fresh Cut Grass.

Another unique vendor was The Sweet Potato Pie Company from Modesto owned by Catrice Prince-Claxton.

Near the festival’s entrance/exit was The Chocolate Dipper, a wonderful downtown Merced candy shop.

Brittney Lowe, who co-owns the shop with her mother, displayed homemade goodies such as fudge and candy apples, their best seller.  One delectable apple was coated with toffee and chopped almonds.

The store, located at 319 W. Main Street in Merced, is a retail candy store, which also specializes in fundraising.

The Chocolate Dipper uses Nordic apples, tart Granny Smith apples that come from Washington.  They’re not too sweet, and they go great with the sweetness of the topping.  Their skin can stand the heat of the caramel, 300 degrees.  When dipped, the caramel acts like a preservative which makes the product last longer.

Lowe told the Times, happily, “We had a good turn out, and we had a good time.  We were asked back for next year’s Nut Festival.”