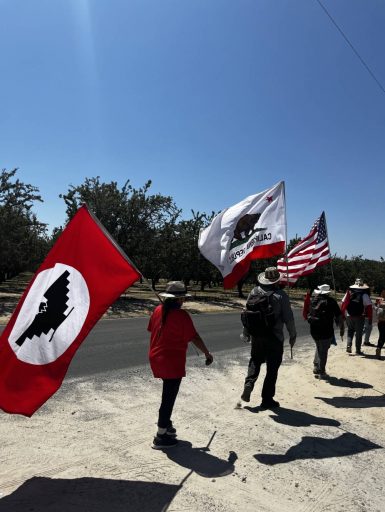 Marching through a scorching heat of over 100 degrees at times, the group stayed persistent and took breaks every few miles with supporters providing hydration and snacks every step of the way.

Asunción Ponce, a farm laborer from Fresno, marched his fourth day with enthusiasm and determination. His feet were blistering but that did not get in the way of his support for the  Merced-Livingston march.

Leticia Zaragoza honors her mom by marching in the same style of outfit her mother wore to work as a farm laborer.

A determined group of more than 30 people started walking from Macias Park in Merced to Memorial Park in Livingston early Tuesday morning as part of a 24-day, 335-mile “March for the Governor’s Signature.”

The march was organized by the United Farm Workers, a labor union founded in the early 1960s by Cesar Chavez, Dolores Huerta, and other farm labor organizers.

“We are walking because we want to make sure that the governor signs the bill that would make it easier for farm workers to vote for union representation,” said UFV President Teresa Romero.

AB2183 — the Agricultural Labor Relations Voting Choice Act — would provide farm workers more choices in how they vote in union elections; privately without fear or intimidation.

“They deserve it,” Romero said. “They are essential workers, they put food on our tables. Day in and day out, we need to treat them with the respect they deserve.”

The march began on Aug. 3 in Delano and will consecutively continue, crossing new cities every day, until the group finally reaches Sacramento on Aug. 25.

Merced residents and advocates who have been walking for days made their way down Highway 59, through Santa Fe into Atwater and Winton, up Walnut Ave into Livingston, and finally down Main St. where supporters greeted them with food, music, beverages, and a place to rest.

“Si se puede!” they yelled as they marched, cars honking with support, and with supporters offering water, Powerades, snacks, and even burritos along the way.

A collective understanding that farm workers deserve the right to safely vote the way they chose to, without fear and intimidation from outside sources, was the driving force behind the march. Some marched because of this recognition; others marched for family members or as farm laborers for their own rights.

Leticia Zaragoza, a supporter from Merced, marches for her mother. She is the daughter of a farmworker and is fighting for the rights of workers just like her mother.

With a white bandana over her mouth, dark pants, boots, long-sleeve, straw hat, rosary, and sunglasses, Zaragoza marched through the route holding the flag of Mexico. Others proudly carried the flags of the United States and the State of California.

“Today I am dressed the same way my mother would leave for work,” Zaragoza told the Times. “She saw me leave this morning and asked me why I wasn’t wearing my tennis shoes, and I told her: ‘Mom you didn’t wear those to work, you wore boots, and so I will wear boots too.’”

Asunción Ponce, a 66 year-old farm worker from Fresno, was eager to start his fourth day marching.

“This is a cause for every farm laborer,” he explained in Spanish. “Gavin Newsom needs to sign the bill, that is why we are marching all the way to Sacramento. We are all united right now, and this is the time for Newsom to pay attention to what we are doing so we are all protected and so we can rid our workplaces of abuse.”

Marching through temperatures of over 100 degrees at times; the weather did not halt the supporters as they reached Livingston Memorial Park.

The fight continues for the group as they plan to march through Turlock, Modesto, Manteca, and Stockton in the following days.

For more information on the march or to find ways to help and donate, visit their website at www.ufw.org/camarch.com.

Families living with autism enjoy celebration just for them