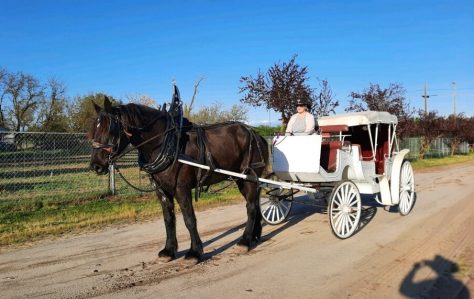 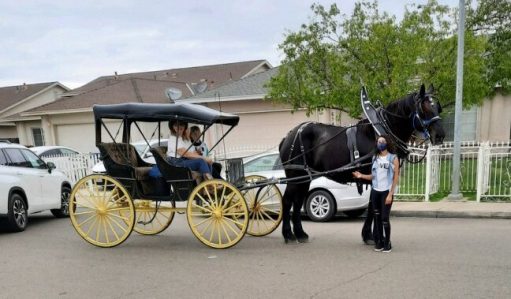 Beau at a drive-by birthday party. 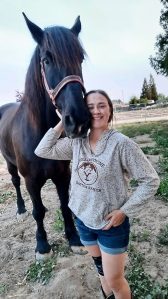 Audrey and her gentle giant of a horse.

Are you looking for something fun to do that will lift your spirits?

Jessica Esau of Winton and her daughter, Audrey Esau, have developed a fun hobby featuring a horse-drawn carriage that is available to the public for rides.

Beau, a handsome black Percheron horse, can transform a carriage ride into a romantic experience for newlyweds, or into an exciting adventure for a birthday girl or boy.

And this may turn into a business one day for Audrey, who is attending Merced Junior College and will soon graduate with a degree and certificates in Agriculture.

Audrey has been accepted to Stanislaus State University in the fall, but she will still be taking requests from potential carriage riders.

“People can rent the carriage along with Audrey, who is 20-years-old, for a special event such as a birthday or a wedding,” Jessica Esau told the Times, “To schedule an appointment, our contact number is 209-201-2132.”

She added, “Both Audrey and I go out together on the ride, so that there are two people.  Sometimes, my young boys help people on and off the carriage.”

Audrey loves horses because having horses was a way of life for her mother’s side of the family.

Jessica had grown up in the Bay Area, where the days of ranches disappeared quickly. She kept her horses at a riding academy dedicated to horseback riding for adults and youth who had physical and mental disabilities.

“It was great working with people with disabilities,” Jessica said.

Jessica’s own mother took a job with the County of Merced in 1980, so they brought their horses to Winton where they had property.

Over time, Jessica became an adult, married, had a career, and then had children.

So her daughter Audrey grew up on a horse ranch. She started out riding ponies, and then she rode the bigger horses.

“When Audrey was 2-years-old, she basically lived on a friend’s pony,” Jessica said. “It was one of the ponies in the pony rides at the Merced County Fairgrounds. … When they were ready to retire the first pony she rode, the friends offered Audrey the pony, Caramel. She took Caramel home, as well as Clyde, who looked like a miniature Clydesdale, and a little white pony mare named Lily.

“These were her beginning ponies.

“We started going to the Renaissance Fair in South Lake Tahoe and got acquainted with Quint and Kelly Ross, who had a horseback riding vacation business, adjacent to the fair site. We would hang around with them at the after-hours parties, and one time, they were teasing Audrey. Quint said that she needed real horses and to get rid of those ponies.”

Audrey, who was 6-years-old at the time, said, “You need to give one to me because my mom won’t buy me one.”

Quint replied that if she and Jessica came to his ranch in South Lake Tahoe, he would give her a retiring draft horse from their program. So they did, and instead of one, they got two draft horses loaded into their horse trailer.

Jessica recalled, “I was shocked when they loaded two, instead of one.  When we got home and unloaded the smaller of the two draft horses, Lady Anna, my husband, who is not a horse person, complained, ‘She’s huge!’  I answered, ‘She’s the smaller one.’

“He exclaimed, ‘Well, you can’t count!’  But he was just teasing. I would catch him out in the horse pen late at night, loving on the horses and talking to them.”

She then owned a Percheron named Jake.

Jessica explained, “We would go to the Draft Horse Classic at the Grass Valley Fairgrounds every year.  It’s a beautiful area, and they put on a huge show for four or five days.  It’s for people to come and see draft horses and enjoy finding out what they do.

“We would go up there when Audrey was younger, and she would wash horses and they would teach her about hitching and unhitching and driving.  Audrey met a horse trader when she was 7-years-old and she came running back to our trailer and said she bought Jake.

“I paid for him and he was hauled home.  We had lost the draft horse, Maude, so we had Anna and Jake.  Draft horses usually don’t live as long as other breeds.  Their weight is hard on their heart, and also on their hooves.  They go down suddenly.

“We lost Anna when she was 36.  She lived twice as long as most draft horses.

“Then we had Jake as our only draft horse.  We pulled up to Sonic in Atwater with Jake pulling the carriage many times, shocking the employees the first time it happened.  The second time, they just asked, ‘Are you coming back next weekend?’

“When we lost Jake, people were really sad about it.  They had seen Jake giving rides in town.  They missed Jake because he had given rides for kids in Winton from when Audrey was 7 to when she was 20-years-old.

“It took a year for us to find the right horse.  We let all the draft breeders and exhibitors know we lost Jake, and we got about 1,000 condolences over the Internet.  This was right before Coronavirus broke out.

“Right before Christmas last year, our contacts alerted us about Thomas, who drove wedding carriages.  Thomas had a team of two horses, but Beau’s teammate had died.  It was hard matching another horse which had the same body type, breed and color who would work with Beau, so Thomas bought a new team instead.

“Thomas sold Beau to Audrey, and that’s how we got our new draft horse.

“People started coming over to say how glad they were to see we had a horse.”

Jessica and Audrey bought a cart at a draft horse and carriage auction in Tulare, and they had also found a Studebaker carriage several years before.  Now they have a white wedding carriage, and they are saving for a brand new carriage.

Jessica said, “I’ve driven since I was little.  When I was older, I learned how to drive a big team.  Mr. Smiser owned a trucking company and a ranch in Castaic. His passion was driving a 28 Mammoth Jack team. Mammoth Jacks are the giant mules bred to draft horses.

“When I was 10, I stayed with him all summer long and learned how to hitch and drive.  He worked me like one of the ranch hands, and he said, ‘You wanted to learn, and you’re going to do it from sun up to sun down.’  I worked all summer and went for rides all over Castaic in a wagon.  After I learned, he would fly me all over the country, and we would do performances where I would drive a team for exhibition at horse shows.”

Long ago, Jessica taught her first horse, Justin, a quarter horse, how to pull a carriage.

These days, Jessica’s one-horse carriage is pulled by the powerful Percheron, Beau.  Percherons are usually black or brown, and are recognized for their intelligence and willingness to work.

They were originally bred for use as war horses.

Jessica said, “The Percheron is a very strong breed dating back to medieval days in France when it was used to carry knights and all their armor into battle.”