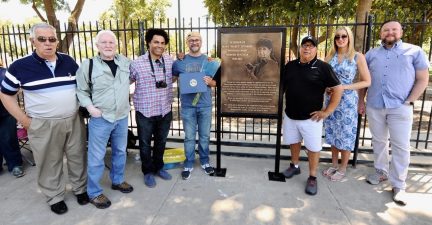 Members of the Marci Stenberg memorial committee pose near the new plaque at Stephen Leonard Park in Merced.

Friends and former coworkers of Marci Stenberg gathered at Stephen Leonard Park to pay tribute to the photographer. 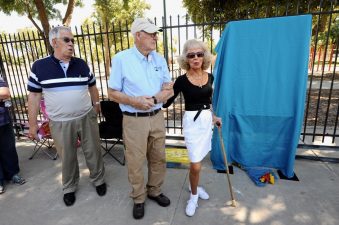 Gail McCullough, a local realtor and airplane pilot, shared some warm memories of Stenberg when the two flew on aerial assignments. 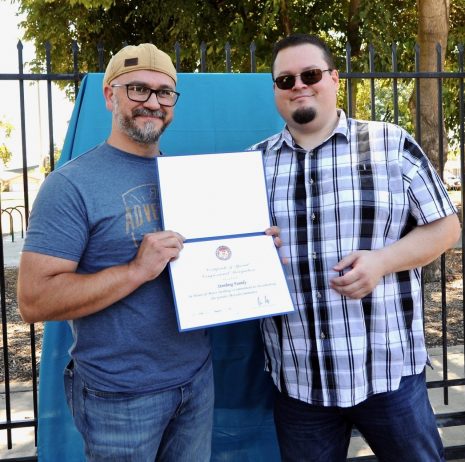 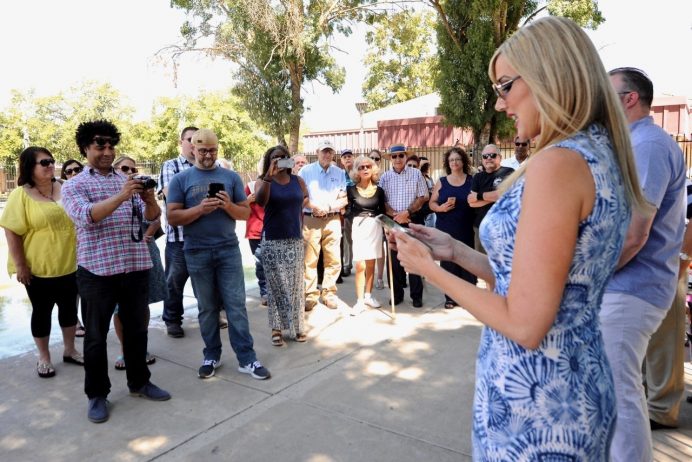 Sara Sandrik, a close friend and colleague of the late Marci Stenberg, leads the unveiling ceremony.

With the soothing sounds of water splashing behind them, friends, coworkers, and community members paid tribute Saturday afternoon to the late Marci Stenberg during the unveiling of a memorial plaque honoring her at Stephen Leonard Park in Merced.

About 40 people took part in the unveiling ceremony inside the children’s splash pad area — named in honor of Stenberg. The event concluded with a reception at the Merced Multicultural Arts Center downtown.

Stenberg worked for the Merced Sun-Star as a photographer before her death Dec. 20, 2012 at the age of 66.

“We are here to celebrate the life of a wonderful woman, mother, grandmother, coworker,” Mike Conway, city of Merced spokesman and a former coworker, said.

“Marci knew every journalist in the county and region but she also knew every member of law enforcement, every firefighter and every person who worked in the court system. And she knew them on a first-name basis. And she knew their kids and grandkids. And dogs, cats and fishes,” Conway said.

Over the last year a committee helped raise about $3,000 for the memorial plaque at the park at 8th and T streets.

Stenberg came to work at the Sun-Star in the late 1980s and photographed many noteworthy events, including the capture of cop-killer Tao Rivera, the massive Coalinga earthquake and a fire that destroyed a block of businesses in downtown Mariposa.

Conway said Stenberg played mom for “all of us” and she adopted more people than Mother Theresa. He said she got to know many newspaper sources professionally but more importantly because she just loved people.

Gail McCullough, local realtor and airplane pilot, took Stenberg on many aerial missions, including photographing UC Merced while it was under construction, the earthquake ruins of Coalinga and San Luis Reservoir. McCullough said Stenberg remained calm and energetic during many challenging flight maneuvers.

Stenberg’s son Eric said his family is truly grateful that the community his mom so loved and cherished chose to honor her memory this way.

“I always wondered what it was like to see the world as she did. Her awe of nature and her love of people and children; she had a compassion for strangers and a loyalty to her family and friends,” Eric Stenberg said.

Victor Patton, a former Merced Sun-Star reporter and now an editor at the Fresno Bee, remembers talking with Stenberg about the police scanner she kept on at all hours, even when she should be have been sleeping.

When the call came in late that night that Mariposa’s Pizza Factory was ablaze, Patton and Stenberg responded, not getting through with the assignment until about 5  the next morning. It was also an opportunity for bonding, something other coworkers also cherished.

Even on his worst day working at the Sun-Star, Patton said, Stenberg made things better.

Nick Gomes, staff representative for Rep. Jim Costa, D-Fresno, presented recognition from Congress. Conway said this support and love also was manifested by the Merced City Council during the process to get the splash pad named for Stenberg.

During the fund-raising process, committee members said Stenberg was a fixture in the Merced community and captured the hearts of the community through her pictures, embodying selflessness, kindness and generosity.

The unveiling ceremony evoked many emotions for Eric Stenberg, one of Stenberg’s three sons.

“Right now i can see my mom blushing with a grin. Her eyes filling with tears of joy and giving that little shoulder shrug of hers, saying, ‘This is awesome!,’ “

It’s time to speak your minds at Town Halls