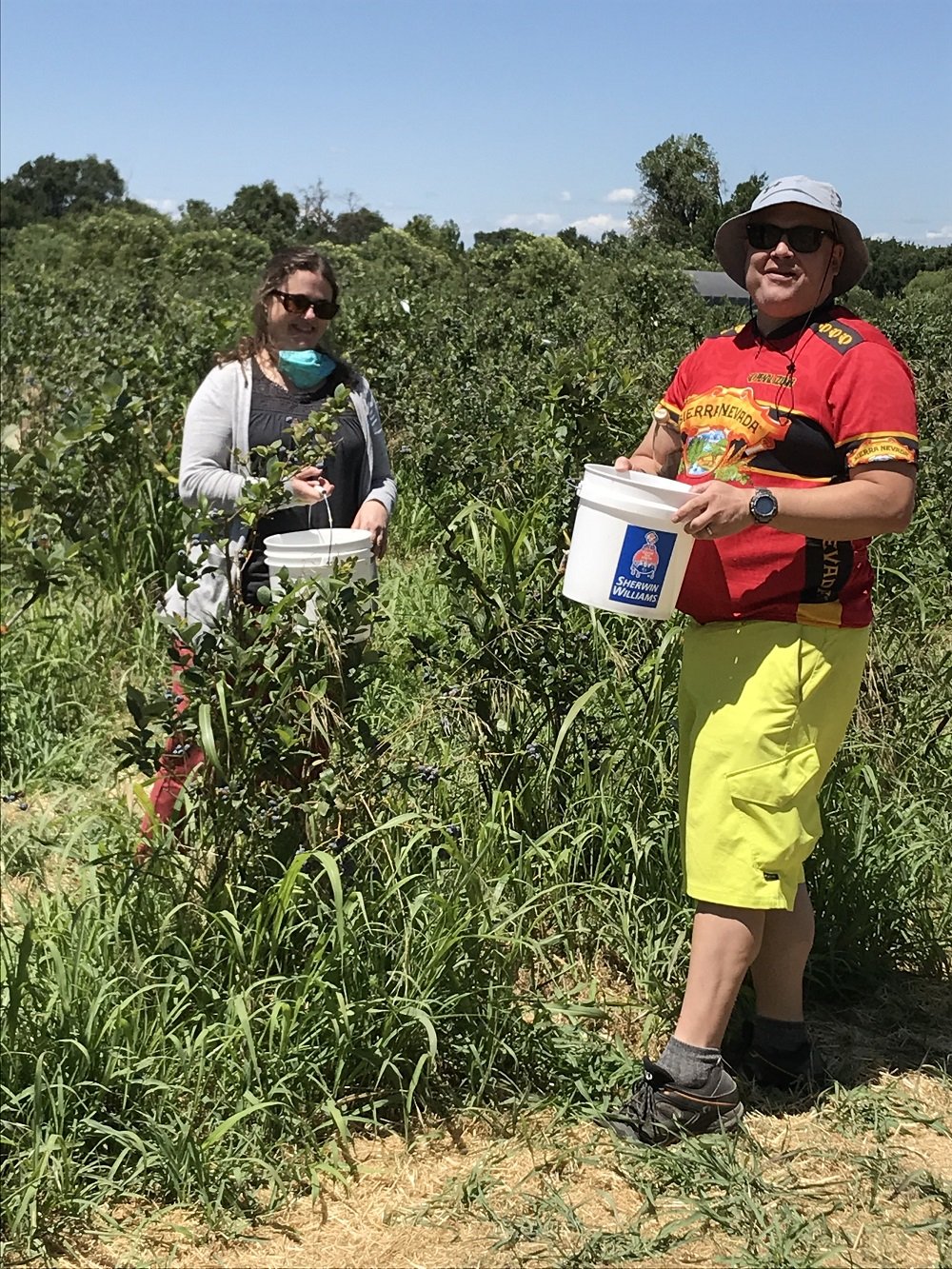 Friends and families had a great time picking organic blueberries and other fruits at the Riverdance Farms U-Pick Festival.

Local families were enjoying picking organic fruit at Riverdance Farms in Livingston on the afternoon of June 7. Among them was a family with two adults and two kids from Planada who collected organic blueberries, fresh from the vine.

Due to the COVID-19 pandemic, Riverdance Farms decided to hold its annual U-Pick Festival this year on four consecutive weekends instead of the customary two-day extravaganza. The annual gathering is known for its educational and fun-filled activities featuring live music, crafts, and workshops.

Organic farming, something Lashbrook takes great pride in, is a method she has been successful at for many years.

She told the Times, “Glenn Anderson was the first in the San Joaquin Valley to do organic almonds, and I was about the fourth. I started organic almond farming in 1989. Before that, because of the chemicals in pesticides, I used to cover up the windows with blankets since my kids were babies.  I had enough, and wanted to quit those practices. Everyone should farm as if their loved ones live in the middle of the farm.

“There are quite a few things that can be used to eliminate pests. An example is soft pesticides like Bt’s [a naturally-occurring bacteria that makes larvae sick when they eat it].  It can be sprayed when moth eggs are starting to hatch.”

Lashbrook believes strongly in the importance of stakeholders talking and coming to agreements about good, safe farming practices before laws are made by a few.

She said, “We need good legislation to keep the groundwater clean. Some organizations have helped write legislation with sympathetic legislators.

“For years, I’ve been involved in organizations like Community Alliance with Family Farmers (‘CAFF’) out of Davis.

“There is no reason why farmers can’t work together to come up with good practices.  Producers and environmentalists have worked together successfully on rangeland by not letting the cattle get into the streams.

“Our farm advisor with CAFF pulled together 30 farmers to discuss issues and form agreements to cut back on pesticides, not let too much nitrogen [from fertilizer] go down into the groundwater, do composting, release beneficial bugs at key times to get rid of bad pests like worms that get into nuts and fruit, and do cover crops.

“An example of a cover crop is planting clover between the rows to reduce nitrogen in the soil and help attract good bugs. We try to plant a cover crop between the rows at least every three years.  Nitrogen is the number 1 gas in the air. A cover crop of clover and beans pulls nitrogen out of the air and into the plants. As those plants end their life cycle and break down, the nitrogen is then available to rejuvenate the ground. That plant becomes fertilizer.

“We plant the cover crops in the Fall. They out compete puncture weeds and other bad weeds that cause problems by growing like crazy during the summer. Our cover crop is a smother crop!

“The water holding capacity of the ground increases because cover crops add nutrients and minerals to the soil. If you don’t use nature, you’re depleting the soil’s ability to help you. With cover crops, root channels help the water percolate and go into the soil better, and you can drive your tractor more easily since there are no puddles.

“People need to be patient and have nature help them.”

Qualified farmers can obtain organic certification through the Merced County Agricultural Commissioner which offers the Merced County Certified Organic program as a farming option based on the Organic Foods Production Act of 1990 and California Organic Products Act of 2003.

These statutes protect consumers, producers, handlers, processors and retailers by establishing standards by which fresh agricultural foods can be labeled and sold as “organic.”

The story of Osborn Park, as told by Vicki Carne