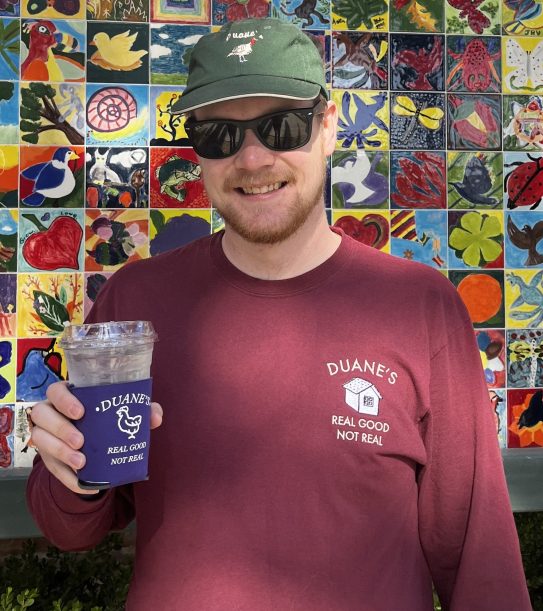 Meet ‘Yark’ — the owner, CEO and founder of Duanes Restaurant, posing with some of his restaurant merchandise. 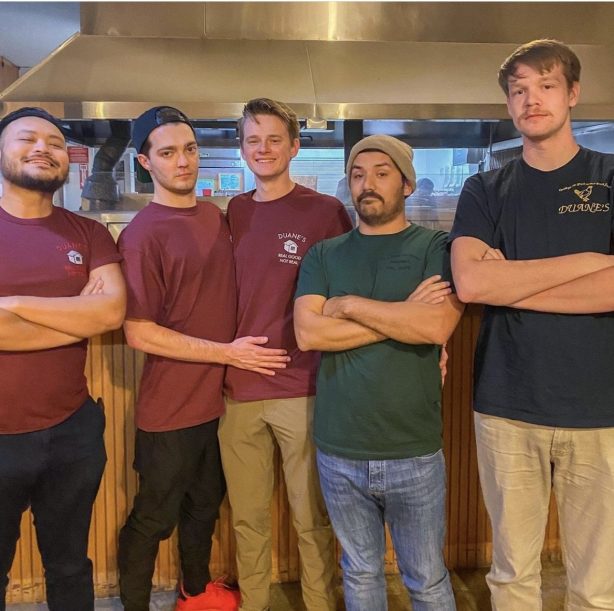 Yark and friends showcasing the different styles of shirts that the ‘fake’ restaurant has released.

Have you been to Duanes?

It’s the “realest restaurant’ in town, according to social media.

The restaurant is located downtown, “near the Merced Theatre … near Bob Hart Square … and right by the Partisan.”

That’s an awesome deal for an eatery that is completely and positively not real!

Duanes Restaurant is an imaginary Merced restaurant created online by a local resident who goes by the name of Yark on social media (though one of his accounts also bears the name Mark Taylor).

Nevertheless, Yark grew up in Merced, and considers himself an “area humorist.” He is currently using the social-media platform, Instagram, to bring a light sense of humor to his hometown.

“I like to say funny things on the internet.” Yark tells the Times. “It’s madness, really.”

The account first began as a running inside joke between him and his friends, but it has quickly grown into an interest for other residents. Clicking through his photos, you will find a collage of Google images and personal photos that a working and real restaurant would have posted.

“Half off this weekend,” a photo of a bucket of chicken is captioned. Another photo of cooked pasta also bears the message: “Grand Opening tonight.”

“I’m very proud of the page,” Yark says with a laugh. “I think it’s very silly.”

His audience responds by going along with the joke and commenting on his pictures sarcastically.

He first created the Instagram account for Duanes Restaurant in September of 2019, and since then has had several sold-out merchandise releases that have actually turned a profit.

“At first it’s not explicit that it is fake.” Yark explains. “It’s supposed to be confusing at first and make you question how is this a restaurant. … It doesn’t make any sense.”

Yark has never had the intention to open up a real restaurant. Heck, he’s not even interested in the restaurant business. But the Instagram page online has still managed to created one of Merced’s most widespread inside jokes.

“About a week after starting it, I was making the first round of shirts for the restaurant. Luckily, my best friend worked at Merced Uniform Supply at the time and he could make and customize shirts for a good price. I asked him to make me a Duanes shirt, and he wanted one too, and then one of my other friend offered to buy a shirt if we made more. After that, I thought, maybe there is a market for this?”

Duanes Restaurant has had four different merchandise runs that have all sold out — shirts, hats, koozies, stickers, and even wooden planters

“I’m not trying to do this as a business and make money off of this,” Yark points out. “I just like being stupid and making shirts because I think it’s the perfect mix of funny.”

To celebrate gaining 100 followers on Instagram, Duanes donated $100 to the Sierra Service Project, a Christian non-profit organization working with teenagers and young adults, teaching them valuable skills in home repair. The organization builds faith and better communities through service to others.

“It was fun but also was one of the most difficult things I did.” Yark elaborates. “I posted this image of the giveaway encouraging people to follow me and comment a charitable organization under the post. I decided to do this because I was selling a bunch of stuff and thought it would be cool to give away some of the money and do something nice.”

Next up for Duanes Restaurant: a new merchandise drop featuring a brand new shirt design!

You can keep up with the fake restaurant only on Instagram: @duanesrestaurant.