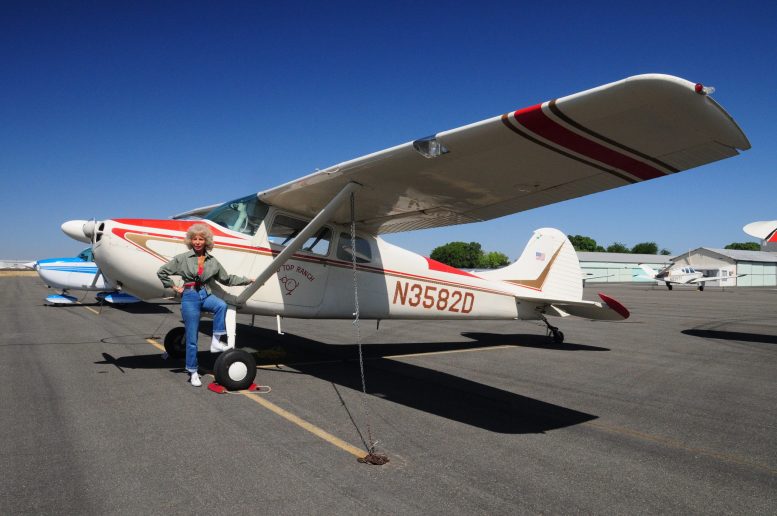 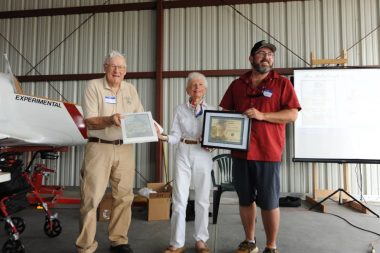 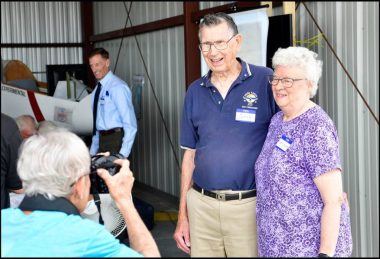 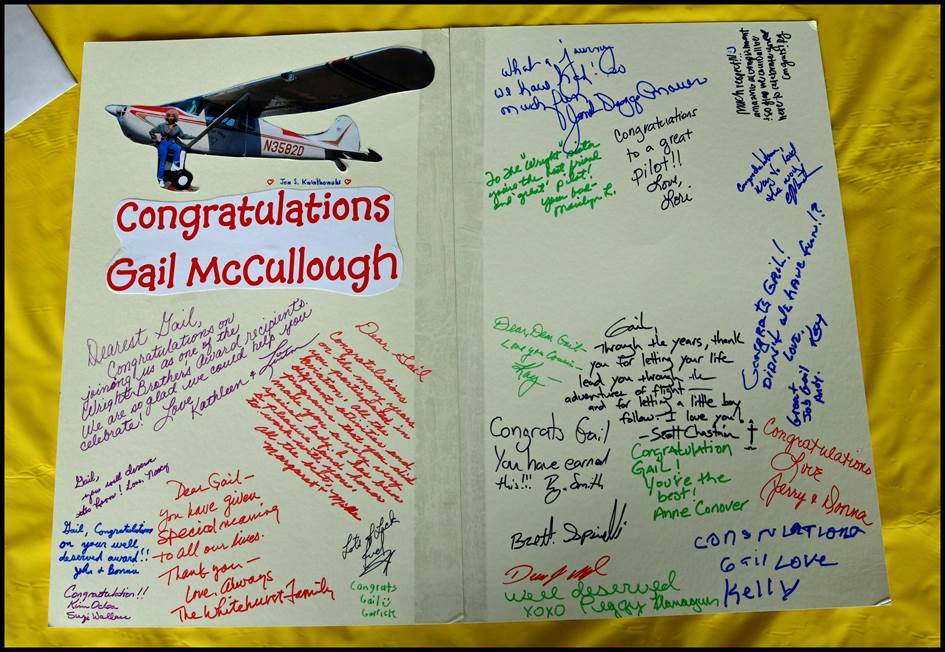 A postcard with well-wishes from friends and family members.

The award recognizes pilots who have practiced safe flight operations continuously for 50 or more years during the course of their aviation careers. It also honors pilots for being mentors, teachers and good examples of aviation excellence.

“I’m a happy camper, and thank you all,” Gail said after receiving the award from Paul Koscheka, the FAA Safety Team program manager.

About 30 friends and family members showed up to Hangar #10 at the airport to support Flanagan. They were shown a presentation on the history of the Wright Brothers and the significance of the Master Pilot Award.

Linton and Kathleen Wollen helped organize the event. Linton Wollen is also a past winner of the Wright Brothers Master Pilot Award. Also, Margaret Bodine helped make sure that everything at the ceremony was properly set up.

Gail was born into the local “Flying Flanagan” family at Red Top Ranch — named for three daughters who had red hair. The ranch had a hanger and runway where Gail’s dad kept a Curtiss Robin.

Gail and her father flew many fishing trips to Baja California bringing back fish that were displayed at the Red Top Restaurant & Store. She eventually earned her private pilot’s certification on Dec. 9, 1966, and her commercial aviation designation on May 3, 1969. She became a Flight Instructor on Sept. 22, 1971 — one of the few women instructors at that time in the Central Valley.

She married a pilot Jack McCullough who had a Champ 7 AC. The Flanagan family had lots of pilots including the three sisters and other relatives.

Many local people may know also know Gail as one of the top real estate agents in town. She would often take her clients flying over their property.

Gail was a member of the Castle Air Force Base Community Counsel and was President for several years. Because of this connection, she was offered rides in the military powerhouse planes: C-130, B-52 bomber, and KC-135 tanker. She actually has about 10 minutes in the left seat of the B-52, piloting a low-level run, and accumulated 72 hours in the tankers.

Other aircraft experiences included the following aircraft: the Breezy, Ford Tri-Motor, a Glider in Hawaii, Stearman, Marquet Charger, and a B-17 — flying in it from Merced to Hayward.

Locally, Gail was active in the Merced Pilot’s Association as President and an organizer of the Merced West Coast Antique Fly-In serving as Publicity, Director, Early Bird Dinner and Public Relations Chairman. When she was Director of the event, she organized a Reno type air race. There were eight airplanes of the Formula I type competing on a course like Reno with pylons to mark the turns. This was the only year the race was part of the West Coast Antique Fly-in. The Merced Pilots Association put on this event for 40 years and Gail was involved with many of them.

After Castle Air Force Base closed, Gail became a member and Board of Director of the Castle Air Museum supporting its events, hosting an L-20 Beaver with her husband at Open Cockpit Days and other activities.

Gail’s last flight in her beloved Cessna 170-B was January 2021 before it was sold in February of that year. Gail and her airplane had extensive time flying over the valley at over 1,000 feet scouting the area.

Gail also had the honor being Queen of the Watsonville Fly-In. She is an enthusiastic supporter of Aviation attending the Experimental Aircraft Association Airventure in Oshkosh Wisconsin four times. In the local Chapter of the EAA, she has been an active member and officer for many years.