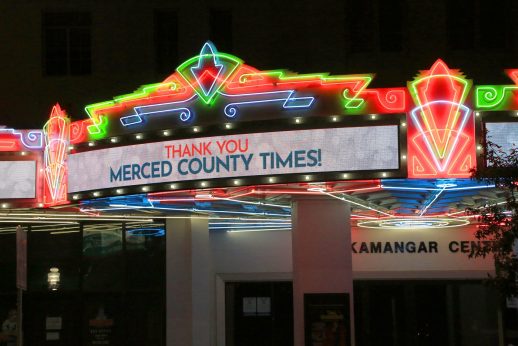 Close up of the Marquee 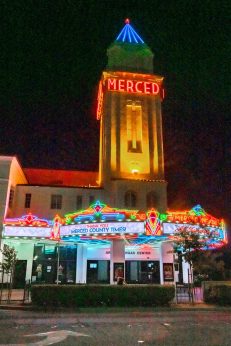 Outdoor View of the Iconic Merced Theatre Tower at night 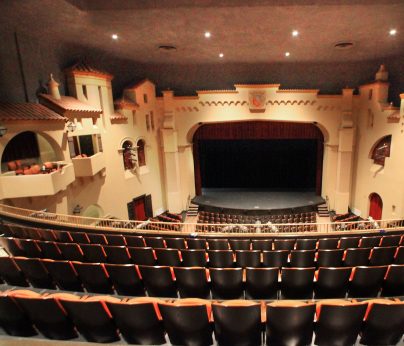 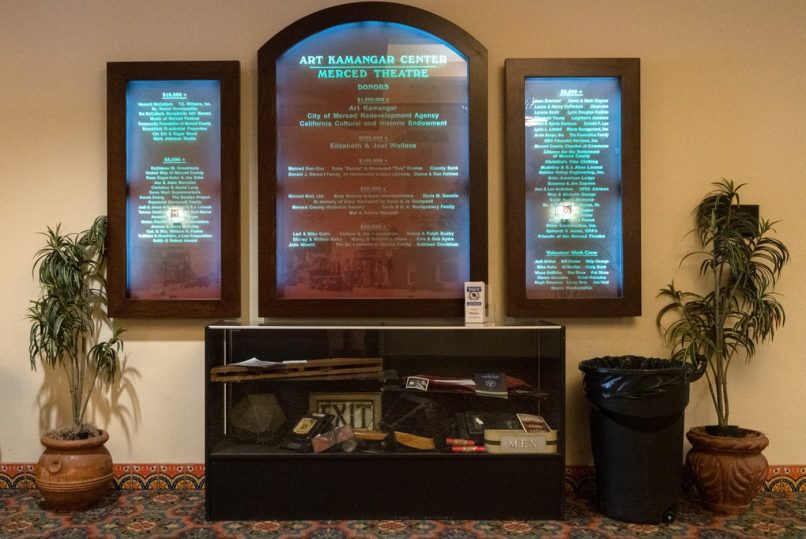 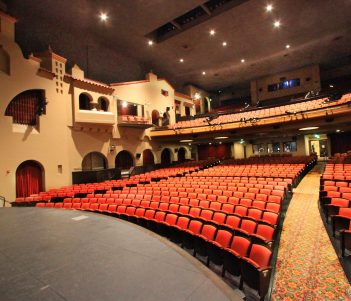 View of the Venue from the Stage 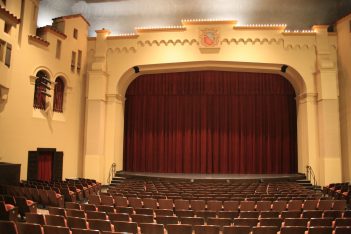 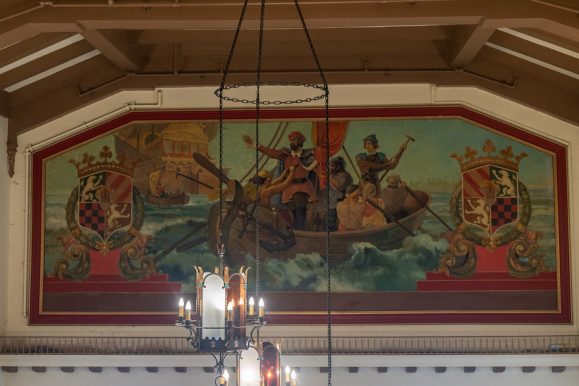 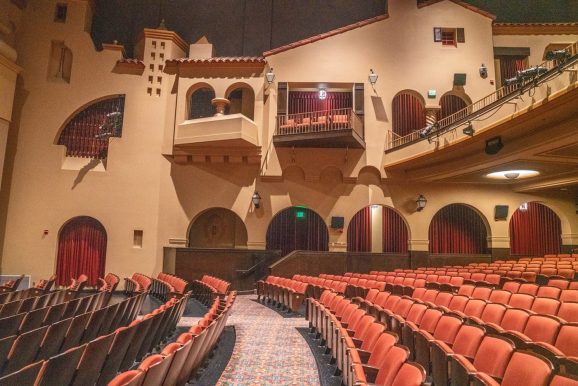 View of the main floor and balconies.

As you drive through Merced on the 99 Freeway, the most noticeable landmark is the 100-foot-tall tower of the Merced Theatre. With its bright neon orange block letters proclaiming MERCED, can be seen for miles.

The Merced Theatre is significant for its role as a social and cultural center of Merced. The beautiful interior is a mix of Art Deco and Spanish Colonial Revival architecture. Sitting in the Theatre is like being in a Spanish castle courtyard with blue skies and even a cloud machine. The property was added to the National Register of Historic Places (NRHP) in May of 2009.

The history of the theatre though goes back to the 1920s. A gentleman named C.H. Douglas appeared on the Merced Entertainment scene in about 1914. He built a movie theatre on what is now the corner of Main and M Sts., which was called the Elite Theatre. The name changed a few times to the Strand Theatre and the Rio Theatre. In 1920, he opened a new theatre called the Merced Theatre. This Merced Theatre was taken over by the Golden State Theatre Corporation in 1924. In September of 1928, Frank Alberti, local manager for Golden State announced the purchase of land at the NW corner of Main and J St for the site of a new theatre. This site was chosen due to its central location. Purchasers were interested in the development of Merced and considered this venture, at the south edge of the business district, to be a valuable move. Excavation for this new theatre is expected to start in December of 1929.

The Golden State group hired the San Francisco based Reid Brothers to design this new Merced Theatre. The Reid Brothers also designed the Hotel de Coronado in San Diego. Using what at the time was the most modern projection and sound technology. It was also one of the very first buildings in town to have air conditioning. The auditorium was designed as a Spanish courtyard, with castle facades and ventilators that sent clouds floating the star-bespeckled ceiling.

The design for the lobby included a mural of Spanish exploration done by Dutch born artist Antoon Heinsbergen. The original furnishings included Spanish style wooden sofas and chairs. The theatre when built had a seating capacity of 1654. Originally there were two matching staircases from the main lobby to the upper floor. In the auditorium there was a loft located on the castle façade that supported a grand piano where the pianist accompanied the stage productions. The stage was 25 feet deep and 80 feet wide and also had an orchestra pit. This was unusually large for a movie theatre built in the early 1930s and for a town with about 8,000 population. The theatre was constructed over the next 9 months for a total cost of $380,000. The grand opening was on Oct. 31, 1931 with the showing of the movie “Local Boy Makes Good.” For about the next 47 years the Merced Theatre would serve the Merced Community in a wide variety of ways including but not limited to, concerts, graduations, weddings, dance performances, speeches, local variety shows and movies. The theatre also includes ground floor rental spaces and second floor apartments with main street frontage.

In the late 1970s the United Artist chain of theatres purchase the Merced Theatre and reconfigured the theatre interior with the main auditorium divided into four smaller movie theatres. Some of the historic atmospheric detail in the main auditorium was lost along with original paneling and light fixtures. This remodeling cost was estimated to be around $450,000 and took about 1 year to complete. In 2002 the theatre closed due to new and nearby competition. Thanks to the foresight of our city leadership a decision was made to purchase the theatre for $700,000. The nonprofit Merced Theatre Foundation was formed, will lease the theatre and be responsible for the day to day successful operation of the theatre and the adjoining businesses and apartments.

With the cities purchase of the theatre and the formation of the Merced Theatre Foundation in 1998 the restoring of the theatre back to its original grandeur began. The foundation worked closely with the city and WMB Architects to demolish the remodeling done by United Artist and start the restoration process. Much of the removing of the old structure was done by volunteer labor. Many local citizens provided help but there also was a need to raise funds for the completion of the total project.

Funding for the project was a combination of several sources including funds from California Cultural and Historic Endowment funds, City of Merced and many local donations. Including a $1 million donation from our local philanthropist Dr. Art Kamangar and $550,000 from the Joel (Bud) Wallace Family. The local community really stepped forward and helped gather the additional funds needed to see that the restoration of our beautiful theatre would be completed. The total remodeling cost was in the area of $14,000,000.00.

There are many individuals that could be thanked for the many hours they gave to see that this project was finished. I will just name a few that gave their time, talent and treasure. Kathleen Crookham chaired the theatre foundation for many years, Grey Roberts donated many hours of financial record keeping, Skip George, Rod La Salle and Craig Scott with their architectural and construction expertise and Vince Griffith leading the volunteers with the demolition efforts. From the city Bill Cahill was the point person and a big advocate of this project. There are many more that gave and their efforts will forever be appreciated.

The theatre now seats 1,185 and has a modern sound and projection system. A solar array was recently installed to help with electrical cost and the foundation is getting new stage lighting and painting the outside walls of the theatre. The marquee was recently digitized and if you go by at night you can see the very vivid and colorful marquee displays.

Let’s just say that after the beautiful restoration, which brought it back close to its original grandeur. The Merced Theatre is once again a vibrant entertainment venue in the heart of Merced.

All Aboard Polar Express! Next Stop: Merced Theatre

Legends live on in historic town of Hornitos