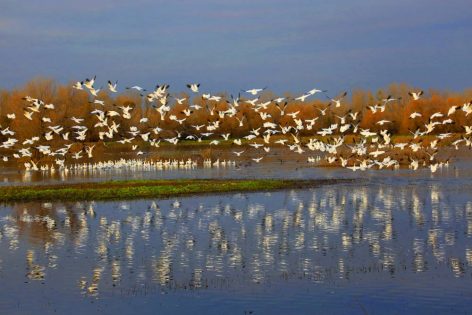 November, December and January are the prime months for the arrival of geese and other waterfowl. 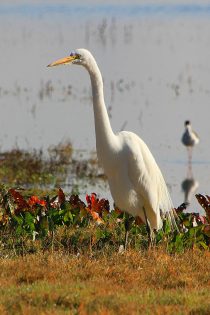 An egret stands tall on the refuge. 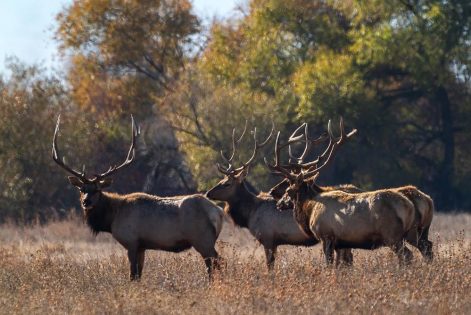 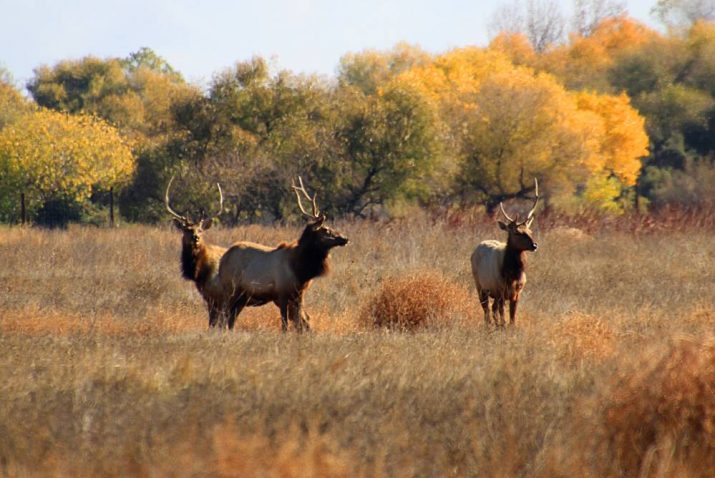 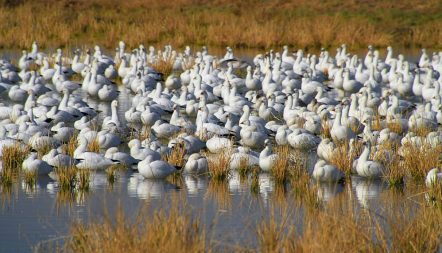 The refuge is a major wintering grounds and migratory stopover for very large amounts of birds. 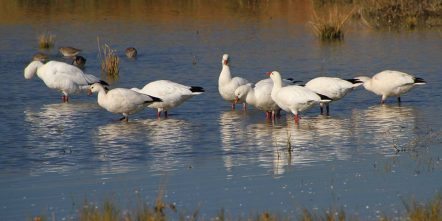 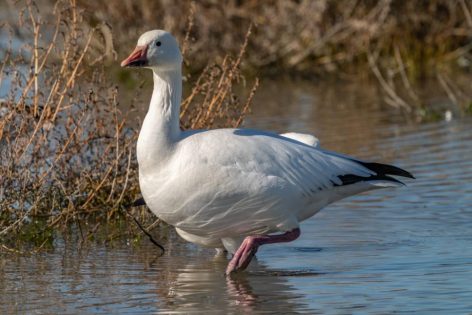 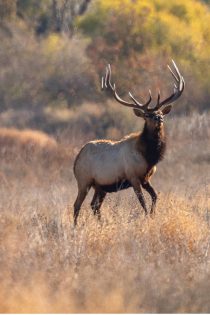 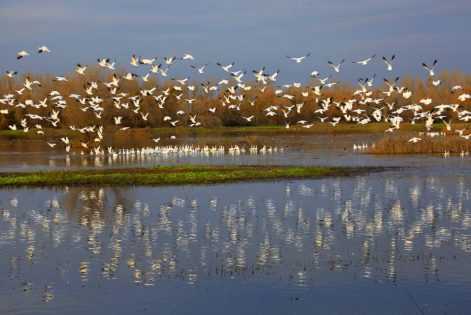 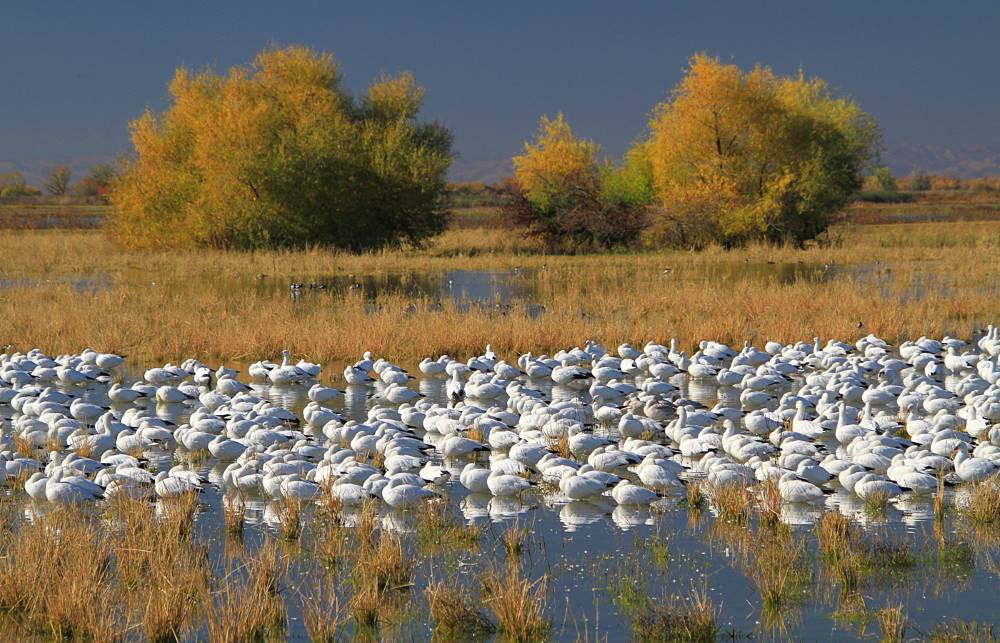 The complex is located along the Pacific Flyway which is a major route for migrating birds. There is somewhere around a million waterfowl each year that utilize this provided habitat. This number is composed of 30 species the most common of which are the Ross geese, snow geese, mallards, teal, pintail and Aleutian Cackling geese. Also, large numbers of shorebirds, songbirds and raptors utilize the complex.

The mission of the National Wildlife Refuge System is to administer a national network of lands and waters for the conservation, management and where appropriate, restoration of the fish, wildlife and plant resources and their habitats within the United States for the benefit of present and future generations.

This story though is about the San Luis Wildlife Refuge which is 26,800 acres of wetlands, riparian forest, native grasslands and vernal pools. In 1966, the first partial of the refuge was purchased with Federal Duck Stamps funds to start developing a sanctuary for the migrating waterfowl. The refuge is a major wintering grounds and migratory stopover for very large amounts of birds. Large flocks of green-winged teel, shovelers, mallards, snow, ross and white fronted geese and many other species. The waterfowl swarm over the mosaic of seasonal and permanent wetlands that cover a quarter of the refuge. The waterfowl stay until late March before they begin their long flight north to their respective breeding areas. A few will stay on the refuge to raise their young.

Also, thousands of tule elk roamed the grasslands, along with mule deer and pronghorn antelope. The now extinct California grizzly bear was also a resident of the valley floor feasting on the salmon from the rivers.

The colonization of California in the late 1700s and 1800s changed the face of the valley. In the late 1800s livestock ranchers began draining the wetlands and changing the natural waterways to help create a landscape more conducive to raising livestock. Large farming ventures also were being developed because of the rich alluvial soils.

In the 1940s, a succession of large state and federal projects were being built to store water for agriculture and to supply drinking water for cities to the south.

The San Luis NWR has played a key role in the recovery of the endangered tule elk, a non-migratory elk subspecies found only in California. In the mid 1800s there was an estimated 500,000 tule elk roaming over California. They were driven to near extinction by hunting and loss of natural habitat by the turn of the century. By some estimates the population was reduced to as few as 20-30 individuals. In 1974 a herd of 18 elk was brought to the San Luis NWR and have thrived since. It is so successful that many elk that have been born and raised here at the San Luis Refuge have been relocated to other elk herds or helped to establish new herds throughout California. The state tule elk population is now more than 4,000 animals, a real success story.

The habitat at the San Luis NWR support a large community of trees and grasses and visitors may encounter several species of animals and birds including coyotes, rabbits, squirrels, meadowlarks, shrikes, northern harriers, kites and other raptors. Great blue herons, egrets and ibis are frequently spotted on the refuge.

The refuge houses a beautiful visitors center and headquarters which includes exhibit hall with interactive educational exhibits about the wildlife habitat. It has tule elk viewing, multipurpose room to conduct environmental education programs. It also serves as the administrative headquarters for the complex. The visitors center is a great starting point for you visit and will help you to become oriented and learn about what to see and do on the refuge. There are three auto tour routes with nature trails and observation platforms. Fishing is also allowed in designated areas and has a large waterfowl hunting program.

November, December and January are the prime months for the arrival of geese and other waterfowl. Late November is the prime time for the sandhill cranes to be arriving in the Grasslands. Eagles are often observed hunting on the refuge along with falcons and hawks.