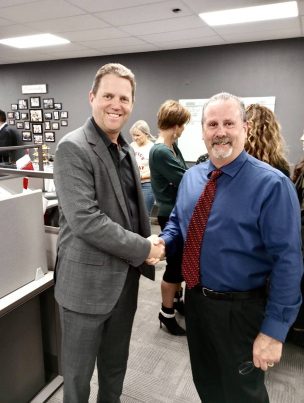 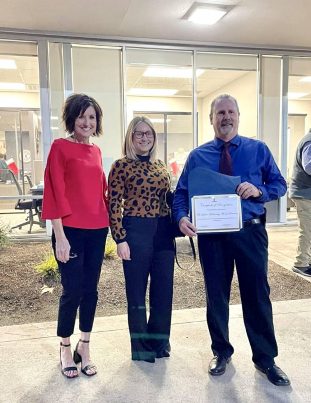 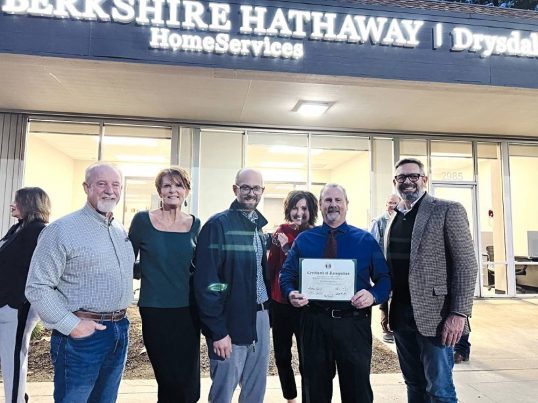 Scott Oliver and his wife Kathy, with Gretchen Pearson, president/CEO of Berkshire Hathaway HomeServices Drysdale Properties, and members from the Merced County Board of Supervisors. 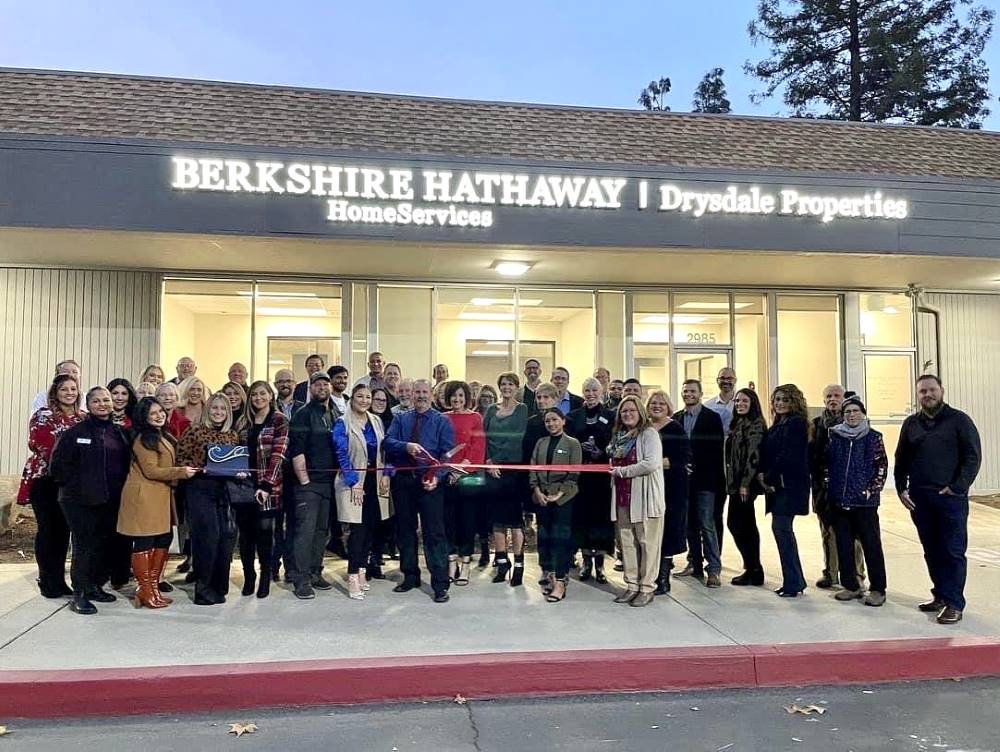 The ribbon-cutting ceremony was celebrated by company officials, local elected leaders and members of the local real estate community.

The office is located at 2985 G Street in Merced — a prime spot in central Merced. The remodeling work started back in March, and staff members set up shop in November. Realtor Scott Oliver, who manages the new location, noted that it was finally time to celebrate and officially bring attention to the realty group’s operations in the community.

Upon entering the office, guests are greeted and met quickly with enthusiastic welcomes from the high-energy staff, ready to assist with any real estate need. The team is comprised of agents that truly depict the meaning behind loving what you do and doing what you love for a living. As they portray this in the way they interact as a team with one another, and even more so in the relationships built with their clients and other real estate professionals.

The Christmas-themed gathering included a beautifully catered spread of hors d’oeuvres, provided by Five Ten Bistro. The invite-only event was the place to be on Thursday evening, with 145 guests making appearances to celebrate and congratulate Mr. Oliver and his team.

The realty group’s President and CEO Gretchen Pearson, and Chief Operation Officer Jason Lytz, were also on hand, as the opening of the Merced office marks Pearson’s 42nd office. As of 2014, when the California-based brokerage BHHS Drysdale Properties was formed, Pearson has become the leading lady running the nation’s largest woman-owned brokerages. Pearson continuously finds herself in the spotlight with her accolades and holds the title of “One of the most powerful people in Real Estate.”

The elite company is among America’s Top 35 real estate brokerage firms which are based on measurable service excellence and customer satisfaction. Berkshire Hathaway HomeServices Drysdale Properties supports more than 1,000 licensed agents, serving 25 counties in over 40 offices throughout California and Nevada. Pearson’s dedication has helped make the company become one of the fastest-growing, full-service real estate firms in California.

Warren Buffet, chairman and CEO of Berkshire Hathaway INC., has said that “In any operation, join up with the best – you will gain from the strengths of those around you.”

Merced’s team of experienced individuals proves to be a great combination of knowledge, innovation, and marketing skills that allows their team to provide home buyers and sellers with the best resources.

Scott Oliver holds a well-established background in the real estate industry and is an award-winning Realtor and Top Producer whose leadership style builds hard-working agents that want to excel. Over the span of two decades, Oliver has garnered extensive industry experience by closing hundreds of properties. With a background that includes serving six years as President of the Merced County Association of Realtors, Region Chair for the California Association of Realtors, State and National Director in prior years, as well as three terms on the Board of Directors for the Merced County Association of Realtors and was nominated Realtor of the Year in 2006.

Oliver’s past speaks for itself, with his unparalleled reputation within the community and with such an extensive background which allowed for him and his team to offer top-tier realty services to sellers and buyers alike — from traditional residential sales, short sales, and foreclosures to investment properties, Agricultural land, and commercial property. Together, they strive to be avid negotiators that have gained firsthand knowledge of the local market, local school systems, cost of living, building trends, commercial growth, and rising inflation costs. The future is looking bright for this group of real estate professionals.