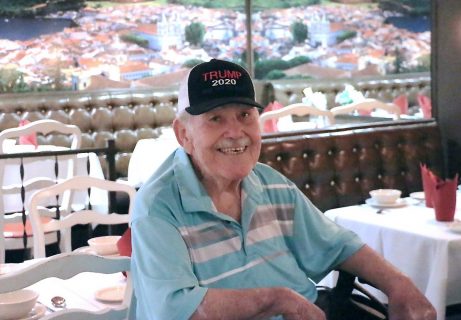 Frank Machado against the backdrop of his father’s hometown village of Angra, on the island of Terceira, Portugal. 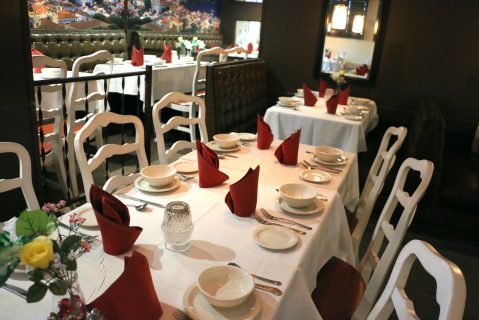 Elegance and class grace the dining room of The Elegant Bull restaurant. 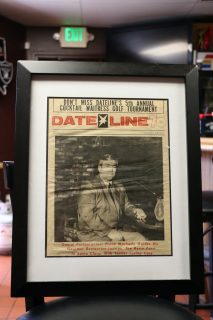 A portrait of Frank Machado back in the day as the genial restauranteur of “Berry Farm” in Santa Clara. 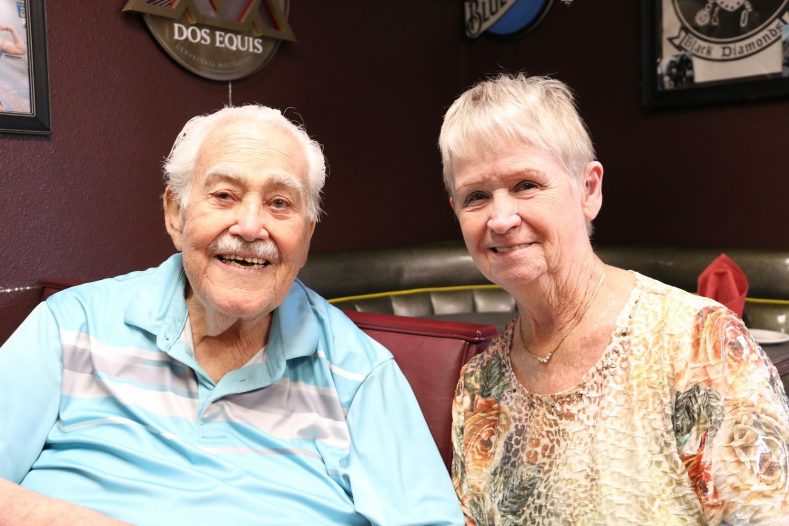 Frank and Karen Machado married in 1975, and have been working side by side ever since. 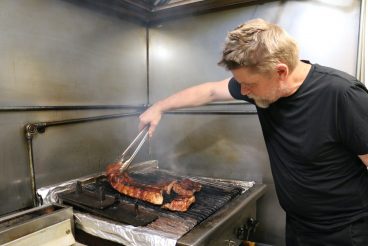 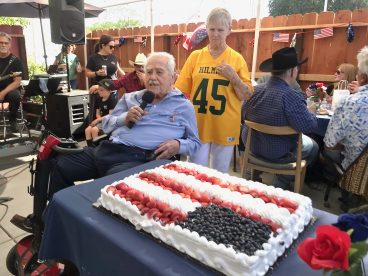 Frank Machado speaks to guests during his 90th birthday party with his wife Karen at his side and an American Flag cake made with strawberries and blueberries. 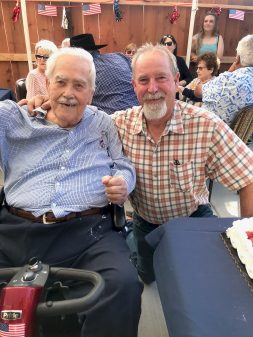 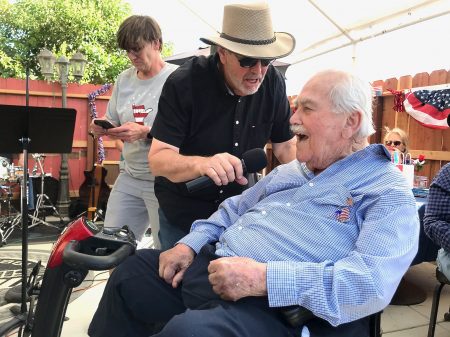 Frank Machado sings ‘Sweet Caroline’ to the delight of all the birthday guests. 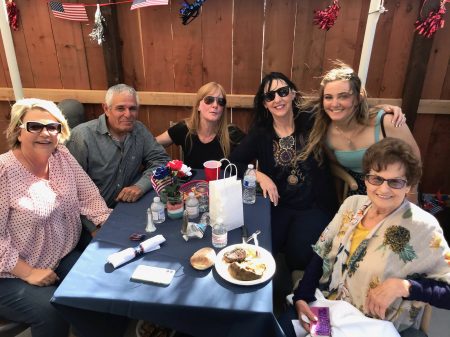 One of the many local families who came out to celebrate Frank Machado’s birthday. 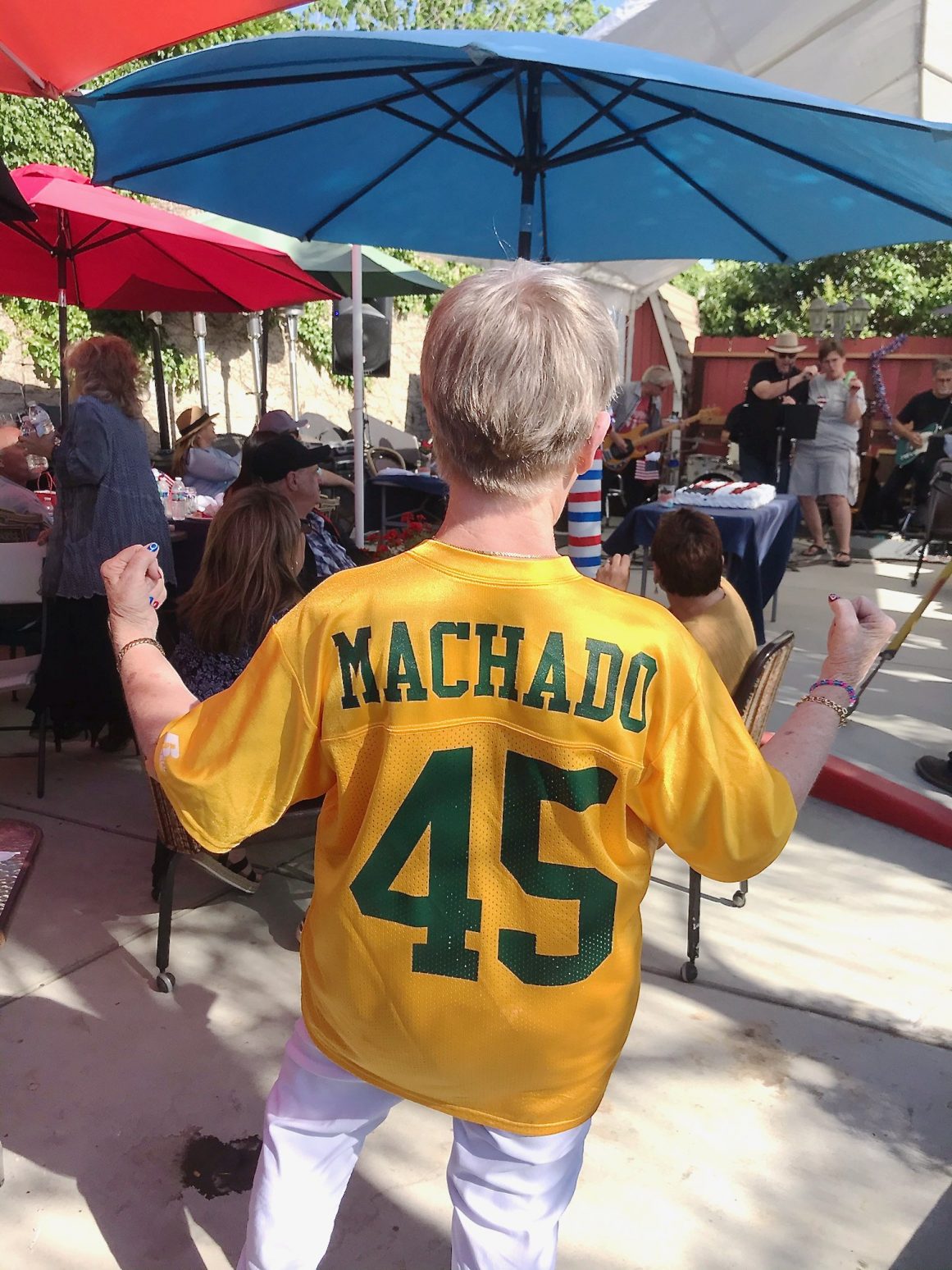 Karen Machado, dressed in a Hilmar High jersey, dances to the music.

Editor’s Note: This story has been updated to include details about Frank Machado’s birthday party and to correct his military service information.

Frank Machado — a Hilmar High School grad from the Class of 1949 and supporter of HHS Football — celebrated his 90th birthday in style on Sunday, May 2, surrounded by family and friends at the Elegant Bull restaurant he established in Delhi back in 1989.

The party was lively to say the least, with plenty of Portuguese Americans, farmers, ranchers, and movers and shakers.

There was a live band, great steaks, and a giant red, white and blue American Flag birthday cake.

At one point, Machado sang “Sweet Caroline” to a cheering crowd.

That was the official party, but Machado’s actual birthday is this Thursday, May 6.

Machado was born in Hilmar to Portuguese parents back in 1931. He served in the U.S. Navy, traveled the world, married three times, helped raise eight children, mourned the death of a wife and the loss of his first born son, and worked more jobs than you can shake a stick at.

During an interview with the Times inside the Elegant Bull, Machado reflected upon his life and all those years in the restaurant industry. He pointed to a large wall photograph of his father’s hometown Algra, a coastal village on the Island of Terceria, Portugal.

“My father worked as a shoe shiner for the richer people,” said Machado, “and that earned him passage to America. Then when he came here, he milked cows for a dollar a day.”

Settling in the Central Valley, his father, Antonio Silveria Machado, and mother, Maria Viera, made Hilmar their home. The young Machado attended Hilmar High and grew up in the valley with his three sisters; Elvira, Angie, Mary, and one brother Tony.

“But they are all gone now,” Machado said.

Machado joined the Navy as a young man. “I always wanted to be in the Navy,” he said. “I worked on the carriers, loaded bombs, ammunition, the ‘Black Diamonds VA-216’ was my squadron. I worked so hard. Was strong. The USS Navy Hornet 12 was one of our vessels. Served for four years. Traveled all over; Japan, Hong Kong, the Philippines.”

He was in his late 20s when he left military service. Back in the Central Valley, Machado became restless. He ventured to the Bay Area with the possibility of a job offer from his favorite cousin, Frank Marcells.

“He was the mayor of Santa Clara,” Machado said. “Didn’t get the job. Was poor, couldn’t get a job, moved to Sunnyvale, rented an apartment and got a job at the Container Corporation, a paper mill for three years at $1.10 an hour.”

Then Machado found himself in the pizza parlor business in the Bay Area. “I was a steward at the pizza parlor, then I became a manager in Walnut Creek. There were seven restaurants. I was working for a father and brother-in-law [duo] but we finally got tired of each other after two and half years. Then I opened my own pizza parlor business with a partner in Santa Clara Village Green in 1966. It did so well that in 1971 I sold it.”

In the interim, Machado worked at another paper mill, the Sefdon Corporation. He also lost his father, and married for a second time. He had one child, David, with his first wife, Barbara, and then eventually, four more mouths to feed with his second wife, also named Barbara.

“Both wives had the same name, and the same birthday,” he laughed.

Eventually Machado decided to open his own fine dining restaurant, “Barry Farm,” in Santa Clara. That’s where he met his third wife, Karen. They met in 1973 when she worked as a cocktail server. They married two years later when she was 32 and he was 44, and they have been working side by side ever since.

“She is the love of my life,” Machado said.

According to Karen: “I use to have the simple life, three kids, then all of a sudden we were a family with all these kids. We were always busy with work, the kids, attending baseball games, it was a merry go round.”

The memory makes Machado laugh. “Yes, she had three children, and I had five. They were our children — we don’t believe in stepchildren — they were all our children: David, Tony, Stacy, Joe, Kathy, Lisa, Dan and Michelle.”

One day Machado received some terrible news. His second wife, Barbara, and mother of four of his children, was killed by a drunk driver.

After nearly a five-year run, and plenty of drinking to boot, Machado sold the Barry Farm restaurant.

“Scotch,” murmured Machado. … The drink had gotten the best of him.

Now he only drinks vodka. “I learned my lesson,” he pointed out.

Then there was the Red Robin Inn in Santa Clara on El Camino Real. “We had three pool tables, games, fuse ball games, shuffleboard, served only beer, and no cussing was allowed. Then one day one guy got mad, teased another guy, and got shot in the alley. There was blood all over. I decided that was the end of that business after two and half years. Then I turned it into a new place: ‘Machado’s Bar and Grill.’ And we had it from about 1974, 75 til 1987.”

In 1988, Machado at 58 decided to retire and return to the Central Valley to be near family. “We bought a 30-acre ranch. Had a farm; bought ducks, geese, pigs, chickens, goats, sheep and rabbits. Karen wanted everything. And she loved going out in the cold morning air. Had a dog that was like a person, Duke. Could handle the whole place.”

But it wasn’t long before Frank Machado got restless again. And within a year, he was back in the restaurant business. At the time, he claimed: “If I don’t go back to work, I’ll die of a heart attack.”

As the story goes, the Machados bought an old run-down restaurant in Delhi with the intention of turning it into a cafe, but instead created “The Elegant Bull” — one of the most elegant fine dining restaurants this side of the valley with candle-lit, linen-covered tables.

The Elegant Bull has become well-known in the Central Valley and the Bay Area for its high quality choice steaks and other quality meats cut to order, and unique European, Portuguese, Italian, and Continental cuisine. The restaurant also has some of freshest seafood dishes in the region.

The Elegant Bull prides itself on distinctive dishes, recipes and flavors passed down over generations, and more modern original creations too. “The recipes come from my mother, father, Karen, and sometimes I’d wake up in the morning with a new recipe,” said Machado. “Customers come from all around the Central Valley and Bay Area.”

The official opening day of “The Elegant Bull” was Dec. 28, 1989. “This was only to be a mom and pop place,” said Machado. “We only had the front dining room at the time. We had lots of customers and officers from Castle Air Force Base. We would get packed and had to open the other side which had a leaky roof. I was fixing up the place, remodeling, but people wanted to come in. So I said: ‘Bring them in, they want to eat.’ One guy held a bowl on top of his head as his companions sang the song ‘Rain Drops Are Falling On My Head.’”

The place was so busy you couldn’t get in without a reservation, the Machados remembered.  “We had to turn people way,” Frank Machado said.

He endured another loss with the death of his first born son, David, who died of cancer at the young age of 50. “It was tough,” said Machado.

Karen Machado added: “David was like the glue in the family.”

The family’s two youngest children, Dan and Michelle, still work at the restaurant. Dan works in the kitchen and, “Michelle just works for food,” according to Machado

Dan has been working at the restaurant since he was 10. “Our meats have better marbling,” he said as he flipped ribs on the kitchen grill. “And our fish is always fresh, fresh frozen right off the boat, with eye and head attached.”

The Elegant Bull has been going strong for 33 years. COVID-19 did affect the business but they survived.

“We worked harder,” Machado said. “Couldn’t get staff, they didn’t want to work. They made more money being unemployed. We gave discounts on takeout, did deliveries, and made a bigger patio area. We had a stationary cooler that blew out mist to keep people cool in the summer, and we added a heater for the colder months.”

The Elegant Bull has two indoor dining areas, a bar and cocktail lounge, and a newly renovated outdoor terrace with plenty of seating, but the restaurant can still get full fast, so reservation are highly recommended.

“We are remodeling the patio now and expanding the area. $10,000 or more for the renovation,” Machado said.

Machado is only now seriously thinking about retiring. He said he would sell the restaurant except he hasn’t yet found the right person to carry on the restaurant’s high standards.

Frank Machado has lived a good life, and can still be found cutting meat to order, or standing in front of the broiler flipping juicy steaks to perfection for his guests.

“He also enjoys chatting with his guests and talking politics,” Dan Machado said. “Just ask him.”

Said Machado, “I’m very political. I’m very upset. I hate racists, and people who accuse others of being racist just because they voted for Trump. I’m not a Republican or a Democrat — those two words mean nothing. I’m a Conservative. A Christian Patriot.”

He adds, “I love people when they are happy. That brings me joy. My heart bleeds when someone complains, but when someone says something good, I love it.”

The Elegant Bull is located right off Highway 99, at 9666 Stephens Street in Delhi. If traveling from Merced heading northbound, take exit 206 for South Avenue. And then take a right at Stephens Street. Contact: (209) 667-7742, or visit online at: www.elegantbull.net. Hours: Tuesday – Sunday,  4:30 p.m. – 8 p.m. Closed Monday. Hours may change as restrictions are lifted.

Reservations Please. Take-out and deliveries available. Outside seating in the newly renovated patio terrace is in progress for up-coming parties, anniversaries, and wedding reservations.