Downtown Business Rebuilds After The Storm

Water poured through the ceiling of the downtown store Cloud 9 during recent storms, forcing the owners to close down the business while they look to rebuild. 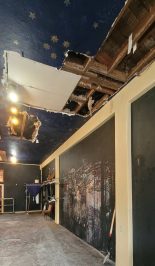 A view of the ceiling damages. 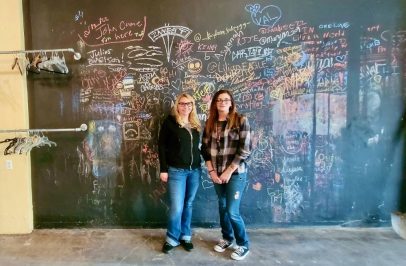 Rhiannon Heim and Angel Deliman stand in front of a community chalk wall in their empty store on Main Street. Their business known as Cloud 9 was flooded after water entered through the roof and part of the ceiling caved in during recent storms.

Business partners Rhiannon Heim and Angel Deliman find themselves struggling to rebuild their dream after recent storms led to severe damage inside their Main Street store. However, the two are grateful for the support they have received from the Merced community.

Shortly after closing on Monday, Jan. 9, pooling water from nonstop rain dropped through the roof of the downtown business Cloud 9, at 234 W. Main St., a half block from the Merced Theatre.

Heim and Deliman suddenly found themselves working endlessly over the next few days, trying to prevent further damage and salvage what they could — all while taking turns watching each other’s children.

To make matters worse, more flooding and roof damage occurred throughout the week. Unfortunately, the business space was forced to close and will remain so until further notice as the owners continue the cleanup and look to rebuild.

Heim and Deliman took over the reins of Cloud 9 and formally reopened the business nearly five years ago, in July of 2018. The ambitious move followed Deliman’s turbulent yet successful battle against cancer. Inspired, the two set out on their business adventure with the goal of creating a safe space as well as providing goods and supplies for those in the metaphysical/spiritual community. Since then, they have managed to do exactly what they had hoped, and on top of that, they were able to build a community so strong that they would have a fighting chance when faced with the fallout of a historic storm.

“We’re just so-so-so grateful for everybody rallying around us — whether it’s the manual labor or just the love, the messages, well-wishes, and prayers,” Deliman told the Times during an interview.

Heim followed by saying, “It’s been really amazing to feel the love come back.”

Some examples of such amazing support are Moore Janitorial and Cleaning, as well as Broadway Laundromat, who donated time, supplies, and services that are crucial to getting them back up and running. If you would like to help as well, you can donate to their GoFundMe (https://gofund.me/7a0aa3db) or reach out via Instagram (@cloud9.collections). Additionally, in order to raise funds, the duo are making and selling $25 goodie bags, that come with a necklace, candles, stickers, and more! You can also call or text (209) 261-6235 to start an order or message the owners.