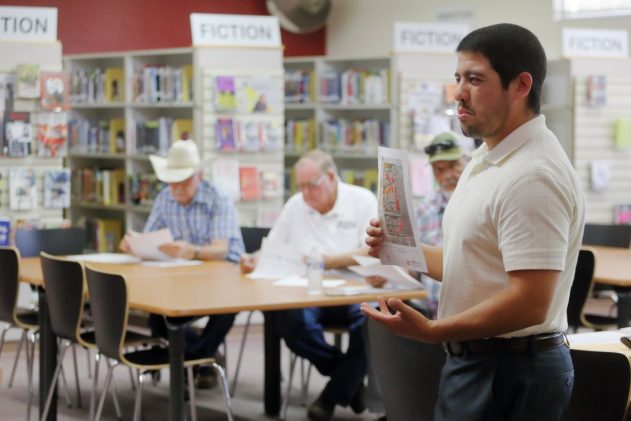 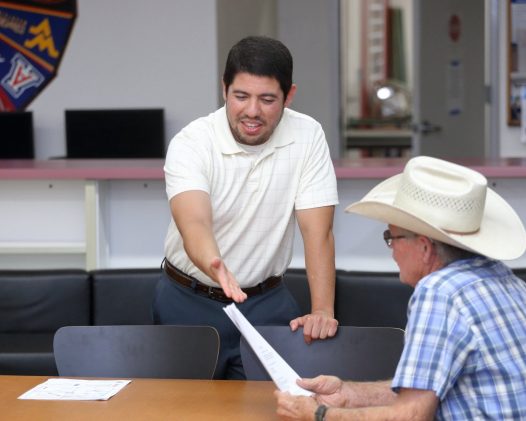 Merced City Council member and Mayor Pro Tem Anthony Martinez met with residents inside of the library at Golden Valley High School last Thursday to discuss plans for his district — District 1 in southeast Merced — and concerns among the residents living there.

Martinez kicked off the town hall by going over the planned Campus Parkway development and the adjacent Merced Gateway site development. Located along Coffee Street, between Mission and Gerard Avenue, the project includes a fire station, a 151-unit apartment complex, several restaurants and retail shops, a gas station, fast food locations, and a Holiday Inn Express. In total, the development will build out 242,592 square feet, with an official groundbreaking ceremony expected to take place at the end of September, according to Dietz.

On the other side of Coffee Street, Martinez pointed out the recent announcements regarding another development of another area along Campus Parkway. Similar to the first development, Martinez explained that a proposed project will include a 134-room, 5-story Hilton brand hotel, along with several restaurants, a 24-hour Food Mart, and fast food locations.

Speaking about the close proximity of the two developments, Martinez said: “I’m kind of excited about that because I feel like it’s going to be a race because they’re both building hotels, gas stations, and restaurants.” Martinez went on to say, “This might have them pushing each other and having them both build a really cool project as they both try to open first.”

Residents noted during the Town Hall that in their discussions with the developer the apartments to be built were discussed as market-rate apartments. In talking with the developer, residents had heard that they would be built to attract UC Students, instructors and other UC Merced associated residents as the needed amenities and lifestyle options would be built around the apartments, with entertainment and shopping options nearby.

Later in the meeting, Martinez directed attention to the planned Childs Court Apartments at the corner of Childs and B. Built as a way to provide housing to those in low-income and middle-income situations. There has been some concern in the community that the apartments could pose a possible problem that would attract crime and bad neighbors into their current neighborhoods. Martinez and Dietz pointed to the presence of management companies for the complex, as well as the adjacent Navigation Center to help the homeless. Merced Police are expected to have regular patrols in the area as they make use of the dedicated beds for struggling residents, and staff with the nearby Behavioral Health Department. Public safety presence was touted as a way to help ensure that nuisance behavior is kept to a minimum.

Martinez pointed to infrastructure developments that will take place as all these developments are built out. He said that’s what is needed in order for the district to develop streets akin to Olive Avenue and Yosemite Avenue in North Merced.

Upon opening the floor to the concerns of residents, numerous individuals pointed to the safety concerns they had regarding children walking to school along Childs Avenue. Several residents spoke of incidents they had witnessed where children walking or biking to school in the morning and afternoon had either been hit by vehicles traveling along Childs Avenue, or had near misses. They asked for increased enforcement of traffic laws and for sidewalks to be built along the busy street.

Martinez highlighted the city’s General Plan which includes the widening of Childs Avenue. Currently, as a canal runs alongside portions of the canal, a project would have to be undertaken to place the canal underground. Following the placement of the canal underground, the next step would be to widen Child Avenue, followed by the laying of a sidewalk.

“Because of the way things are lined up in the General Plan, we have to expand Childs first before we put down the sidewalk or else we’re going to be tearing up that new sidewalk when it is expanded,” Martinez explained.

As the meeting came to a close, residents took to the floor to share a myriad of concerns centered around homelessness and the issues arising from it within their district. Residents looked to have the panel and Mayor Pro Tem Martinez increase patrol of the area and better deal with issues arising in homeless populations.

City Manager Steve Carrigan and Assistant City Manager Stephanie Dietz talked about new coordination with county and local agencies such as Cal-Trans as they deal with a shifting homeless population, as well as efforts like the Childs Court Apartments and the Navigation Center to provide resources for those who wish to receive help.

Additionally Dietz outlined new steps that are being taken in the local courts to prevent those who are homeless from simply not showing up or coming to court, or otherwise wracking up citations, by creating a diversion court to deal with the unique issues, and not releasing those who have repeatedly not shown up to their court dates.

Martinez ended up thanking those in attendance for making their way to the town hall in order to have a cordial but lively exchange with him. Martinez, Carrigan, and Dietz noted that this type of exchange is what is needed in order for local city officials to continue working towards a better Merced.