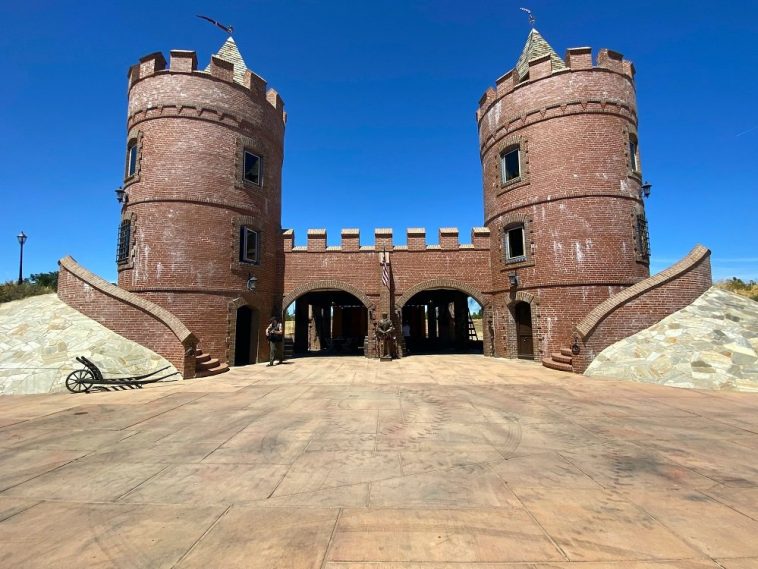 Kasteel Noz, a medieval-like castle, is nestled between Snelling and Denair. 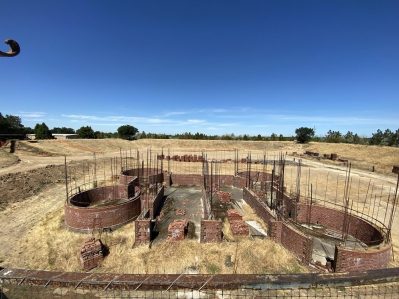 The compound expansion in progress with plans for a pond and three draw bridges to lead to the main castle. 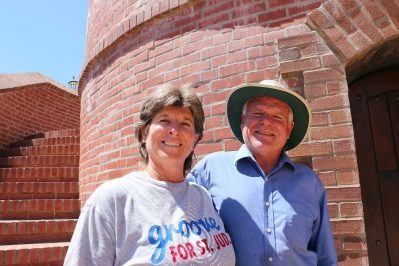 Casper and Diane Noz, married since 1983, plan to move into their “Medieval Castle” once complete but for now they hold events and live in Denair. 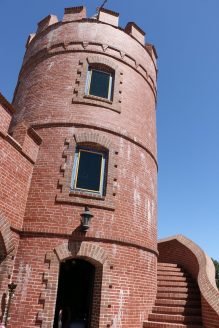 Each tower has its own amenities with an inside wooden spiral staircase leading to A forth-level lookout terrace. 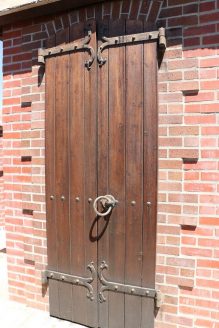 All doors and hardware were custom built by Mr. Noz himself. 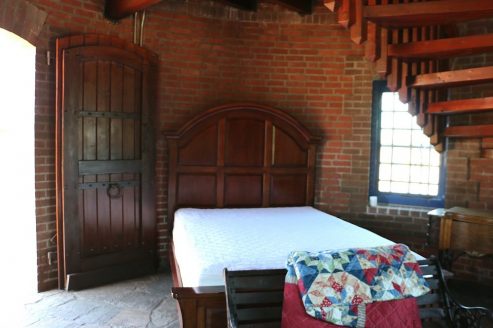 Rooms inside the towers offer rustic accommodations with minimal medieval like amenities. 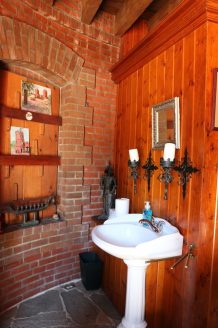 Bathroom inside one of the towers offers some modern comforts.

There is the makings of an incredible medieval castle nestled amongst the almond orchards half way between Denair and Snelling.

Casper Noz, a Denair resident, has built the structure himself, one brick at a time, in his own spare time.

“If you only work on the weekends, it slows you down a bit,” Noz says.

The unusual project all started when Noz first visited the United States with his family back in 1977 when he was 20. Born in the town of ’s-Hertogenbosch, a town in the province of Holland in the Netherlands, Noz grew up surrounded by Dutch architecture and the rich history of the Netherlands. His passion for Dutch medieval architecture, particularly from the 6th to 14th centuries, came from his schooling.

“My teachers inspired me with history stories of castles and cathedrals,” he says.

His education growing up was very rigorous. “In elementary we went to school six days a week, with no sports, only academics from 9 a.m. to 4:30 p.m.,” he says. “How much do you know at 12 years old? We had more class hours in math and physics. Schooling was very rigorous. College too.”

And so, by age 20, it is no surprise that Noz had already earned an engineering degree.

However, the Netherlands did not provide Noz with the freedom to create, design, and build they way he envisioned. “Being a socialist country architecture and design was heavily regulated to the extreme by the government with building restraints regarding color, design, and shape,”Noz explains.

He told of a story where is brother once painted his house door black instead of white like all the other houses in the neighborhood, and was actually taken to court over it.

Wanting to expand his horizons, he returned to the United States in 1978, with his engineering degree in hand, and decided to make America his home.

First landing in Detroit, Michigan, which didn’t impress him much, Noz then made his way to sunny California and the Bay Area. Eager to work and apply his skills, he worked for three different companies as a contractor. But after a short period, he decided he wanted something more and wanted to branch out on his own. That’s when Noz made the move to the Central Valley leaving the Bay Area and making Denair his home.

As Noz worked in his field of expertise, he acquired more skills and eventually started working for himself as an independent contractor and remodeling custom homes.

Noz met his wife, Diane, of 38 years in the Central Valley whom he married in 1983. Diane worked as a school bus driver for over 13 years out of Denair. But Noz still had his dream to build his castle. So in 1987, they purchased 20 acres of land between Denair and Snelling, off of Keyes Road — a beautiful stretch that winds through almond orchards.

“But back then, when we bought it, it was cow county and dry grasslands,” Noz says.

After drawing up seven different designs for his dream castle, Noz finally decided on one. His medieval castle design is based on the Dutch castles from the era of about 600 and 1,400 A.D. Noz then went to work acquiring the materials, equipment and preparing the property — including planting over 500 oak trees by hand. Today many of the trees line the drive way leading up to the castle.

With only the weekends to work on the castle, progress has been slow but moving right along. Noz has kept expenses at a minimum by doing most of the work himself, including lawn mowing around the entire perimeter of the compound. He laid the bricks by hand, made the wood doors, did all the remodeling inside, and even bent his own steel to make the castle hardware door latches and handles.

Noz has been trying to keep as true as possible to his medieval design.

The “Kasteel,” as Noz calls, is 12,000 square feet. There are two large complexes with the front one near completion and the rear structure still it in the works. There are two, large, rounded four-level towers on either side of the main entrance of the castle and spiral staircases with the four levels being the lookout terrace. Each tower is rustically decorated inside with accommodations and amenities keeping tune with the medieval feel. Water is supplied from a water well. Eventually Noz said he wants to put a fish-pond-like moat with three draw bridges to join both castle sections. The tallest part of the castle is 300 feet high.

It has been an expensive project to say the least, and a lot of work. Noz wouldn’t say just how much his castle project has cost him so far when asked by the Times, but said: “Every year I basically lose money.”

In the meantime, for most of the year, the completed castle front compound is rented out for special events. Their permit, which they acquired 10 years ago, allows up to 250 people (in pre-pandemic times). So far they have hosted more than 60 events including weddings, graduation and birthday parties, anniversaries, and once a veteran’s celebration party where Noz and Diane got dressed up as a King and Queen.

“Yes,” he says, “we even had to ask for overripe tomatoes from a grocery store to throw as part of the play.”

There are latch rigs to tie a horse or a camel, if you will, onto the castle. And in front center of the castle is an enormous fire pit which adds to the magic of the castle at night or dusk when lit. There is also a separate outdoor building that is used as a bar for events, and to the side, some very modern bathrooms for events use. The events also help fund the castle project, Noz says.

It’s been a labor of love for Noz who says it could be another 15 years, “If I’m lucky,” before it’s totally complete.

Casper and Diane Noz have two daughters and six grandchildren ranging in age from 1 to 15. They had a son who died just five years ago in an off-duty Coast Guard accident.

Noz retired this year at 51. He hopes to have more time to work on his “Medieval Kasteel.” However, he is now finishing the roof on his daughter’s house. He seems to stay very busy.

The Times asked Noz what he planned to do once the castle was totally completed.

He replied, “We will move in.”