Many people already know the story of the almond Christmas tree, about three miles outside Hughson.

It’s been told before in the local newspaper, and a few years ago, it even made the nightly newscast on a national network.

But you know, there’s always somebody, driving through those country roads, passing by the rows and rows of almond trees, who comes across the decorated one in the middle of it all, and is genuinely surprised.

It’s somewhat smaller than the surrounding trees, but with a glow so bright — especially at night — it shines like a little miracle on a lonely dirt corner at the intersection of Grayson and Tully roads.

Amazingly, there’s no other light at that stop, and the power that lights up the tree is a wonder.

Locals call it Danielle’s Tree and they find comfort knowing that it continues to spread Christmas joy — and curiosity — a quarter century after the first bulb was placed on its branches.

Earlier this month, David Genzoli was stringing lights on the tree like he does every year when a local commuter pulled over to finally find out what gives. Why that tree? Why this place? And where do you plug in the lights?

Genzoli didn’t stop what he was doing, but he gave an all-too-understanding nod, and as he added more lights, he began to tell the story he has told probably a thousand times.

It’s an emotional one, filled with sweetness, marked by tragedy, and sprinkled with hope for the holiday season.

You see, many years ago, Danielle was David’s little girl, and one day she took a liking to what was then a fragile sapling at the edge of the orchard.

Unfortunately, the poor little tree wasn’t growing as well as the others, and Danielle’s father told her he planned to uproot it. After all, this was the family business that put food on the table, and part of an industry that supplies the entire world with delicious and nutritious treats.

Well, Danielle still didn’t want her dad to tear down that tree. She didn’t like that idea at all. So she started to call it her “Charlie Brown Tree,” and she urged her dad to keep it.

And so David did what daddy’s do. He told her: “All right.”

That Christmas, they placed a single bulb ornament on the tree, and thus, a small holiday tradition was born in the Genzoli family.

Years passed, and Danielle grew to be a teen, but sadly and tragically, her young life ended too soon and too suddenly.

That year at Christmas time, David didn’t have the heart to continue the family tradition. However, one day, he and his wife, Kimber, discovered that someone had decorated Danielle’s tree with homemade ornaments.

They didn’t know who it was, but they left the act of kindness be, and it just snowballed from there.

People from around the town and surrounding community began contributing their own ornaments each year — as a tribute to Danielle or as a remembrance to a family member of their own who has passed.

The Genzolis began to hear personal stories from residents and travelers about how the tree brought them hope and inspiration. One year, an amazing wrought-iron sign that spelled out “Danielle’s Tree” was placed on the corner.

A few years ago, a family relative, Kelly Isaman, put electrical wire into that ground that extends from the tree all the way to the family home in the middle of the orchard. That’s when David started stringing lights on the tree and added a star at the top.

The Genzoli family decided to do the tree lighting on Danielle’s birthday, Dec. 8, and they’ve done so every year since.

Danielle would have been 33 this year.

When David Genzoli tells the story of Danielle’s Tree, he makes sure to point out that the tree has become a Community Christmas Tree, and today it really is for everyone. The family tries to keep all the decorations that are left on the tree, and they put them all up again each December.

Today Danielle’s memory lives on through the little almond tree that touched her so many years ago, and continues to touch the hearts of local residents, as well as the surprised traveler.

Danielle’s Tree continues to radiate love into a silent night.

In 2010, Kimber and David, their son Ryan, and family friends started a nonprofit to help young people in crisis. They call it Danielle’s Gift. To donate to or learn more about Danielle’s Gift, visit daniellesgift.org. 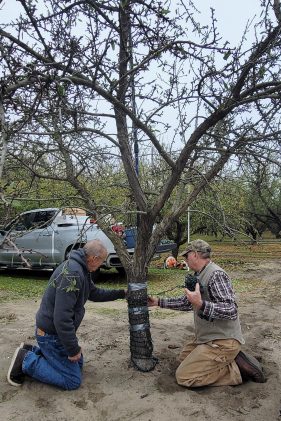 David Genzoli (at right) and Kelly Isaman string lights on Danielle’s Tree before the annual tree lighting that was held on Dec. 8. The special tree is expected to stay lit at night through December.
ChristmasHughsonHughson Christmas TreeStanislaus CountyTree