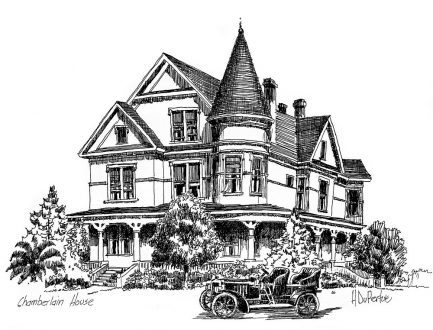 The Chamberlain House at 509 W. 26th Street.Many old-time residents of Merced will recognize this past home as the first convent of the Usuline Sisters, who ran Our Lady of Mercy School near the old Hospital. It originally belonged to James Fenner Chamberlain, a successful landowner who built the home in the late 1800s. By 1928, the house was being used as a convent and was eventually torn down. 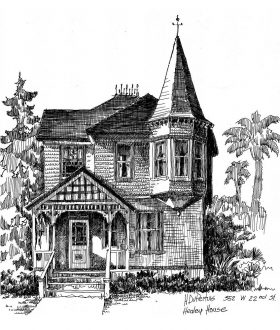 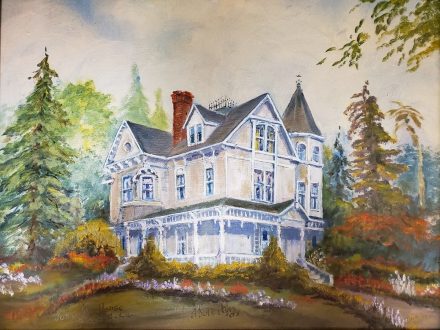 The Judge Law House at the northwest corner of 23rd and Canal Streets. On November 10, 1885, Judge John K. Law purchased four lots on the corner of 23rd and Canal Streets from Charles Crocker. Upon this property he erected a stately mansion in the style of his boyhood home in South Carolina. The house became known far and wide as a center of Christian hospitality and fellowship. Law helped establish the Presbyterian Church in Merced. The house itself was destroyed in the 1950s. A row of tall palm trees still standing at the site is all that remains of the estate. 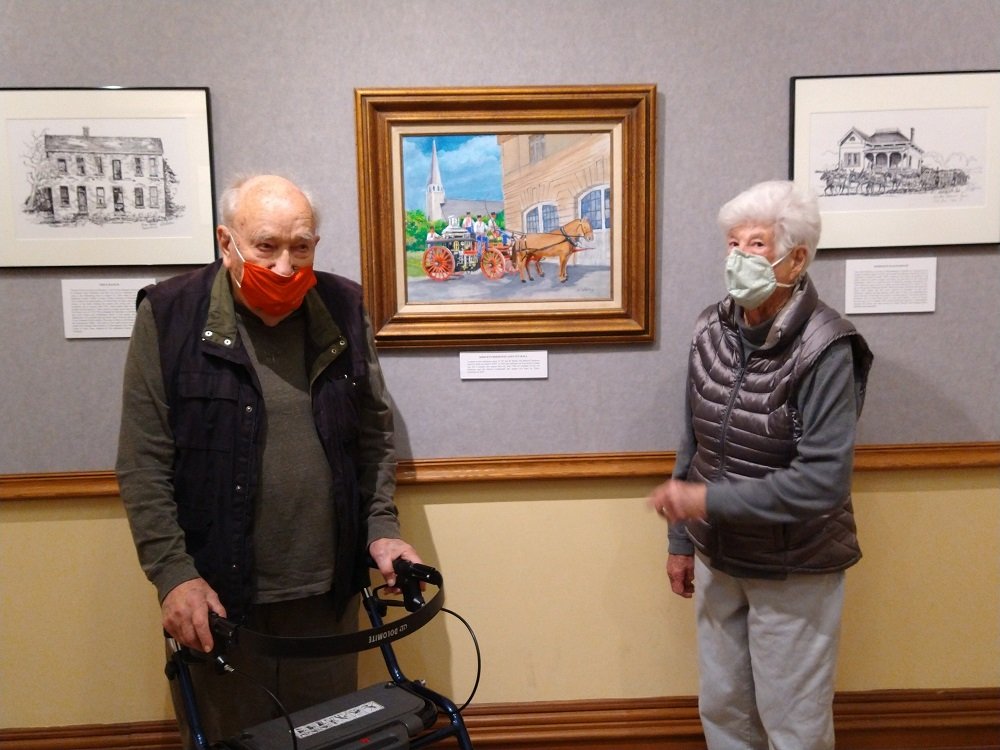 Henry and Leona DuPertuis in front of a painting of the old firehouse in downtown Merced.

The Merced County Courthouse Museum has reopened with its normal operating hours: Wednesday through Sunday from 1 p.m. to 4 p.m.

Currently on display is the “Homes of Old Merced: Town and Country” exhibit, featuring 50 beautiful drawings and paintings of historic homes in town and the stories behind them.

The exhibit is based on a book of the same name which was written and illustrated by Henry DuPertuis, a retired local architect and artist.

“This all started about 1980 when the museum director suggested to my wife that I write a history of Merced,” DuPertuis recalls. “I decided to use architecture as a theme. My son Jeff and I worked together on the project. He did the research and some of the writing. I did the illustrations. That first book was all done by hand, no commercial printing, in a calligraphy style.

“Twenty years later, Museum Director Sara Lim and I decided to write an upgraded issue.This included some homes we had missed before, and ranches started by 49ers who left the gold fields and found their fortunes in the valley growing food for the miners and had an impact on the development of Merced.”

DuPertuis hopes visitors to the museum will learn from the exhibit about the people who built the city.

He adds, “I was surprised how many of those old homes still exist.”

DuPertuis says he has never been honored with an exhibit of this kind in his long career as an artist and an architect.

He has lived in Merced since 1949 — some 72 years — and he practiced architecture for 48 of those years.

The book is available for sale in the museum gift shop for $14.95. For more information, please contact the museum office at (209) 723-2401 or visit our website at www.mercedmuseum.org.

The Courthouse Museum is located at 21st and N Streets in Old Merced.