County leaders sworn in at Courthouse 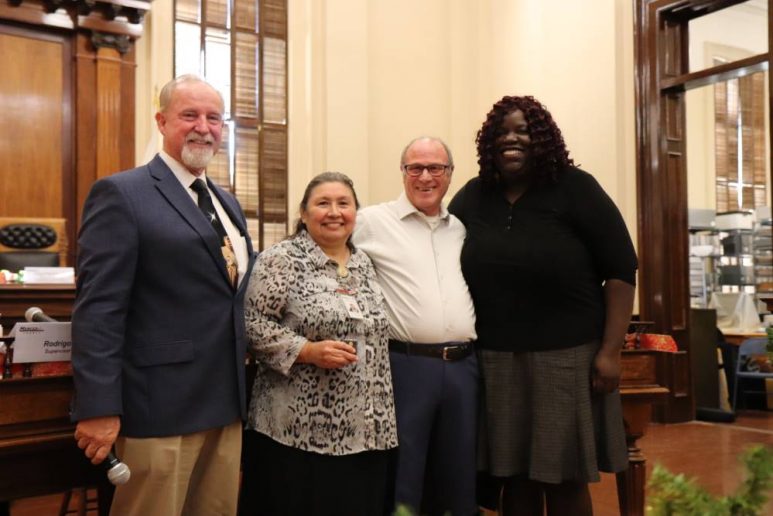 Anita Richards, at center, was honored for her work in the field of public health. 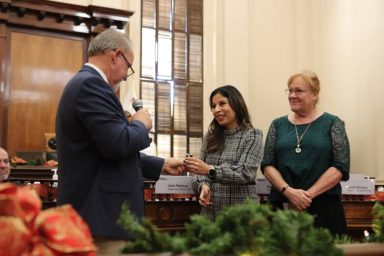 Supervisor Lloyd Pareira awards Delilah Garza a 25-year pin for her work in the field of behavioral health. 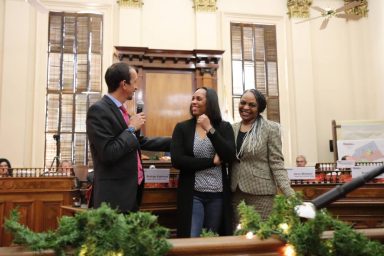 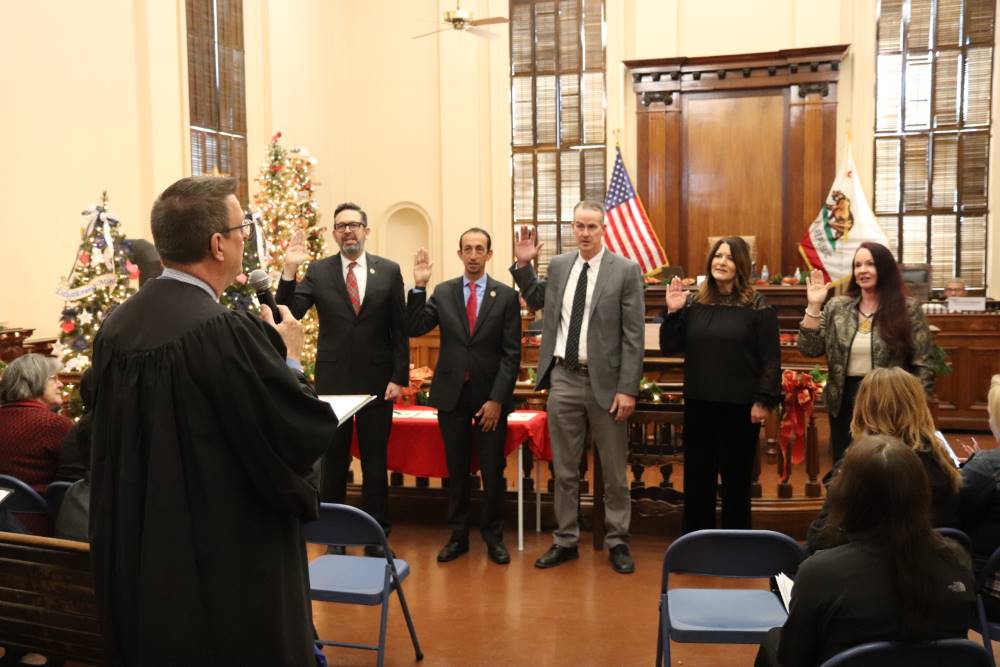 It was standing room only at the Merced County Courthouse Museum on Tuesday as the Board of Supervisors held a special meeting inside the historic building.

Chairman Lloyd Pareira directed the meeting from the courtroom bench that was used by judges as far back as 1875, while the rest of the board sat in front. They were all flanked by Christmas trees decorated as part of the museum’s open house earlier this month.

It was the first time the Board has met for a special meeting in the courthouse since the retirement of longtime Supervisor Jerry O’Banion in 2018. The courthouse was the board’s regular meeting place in the early 1960s.

During Tuesday’s meeting, Supervisors Daron McDaniel and Scott Silveira were finally sworn in following their unopposed victories in the direct primary elections in June. They start their new four year terms in January. Superior Court Judge Brian McCabe was on hand to administer the oath of office.

“Being in this historic courthouse, it reminds me of the old saying, ‘Yesterday is history, tomorrow is a mystery, but today is a gift, that’s why it’s called the present,” said McCabe. “This edifice is the present to Merced County, because it is antiquities jewel… Fresno and others had sister courthouses built by A.A. Bennett, all torn down. This is the sole survivor except the Capitol. This is it.”

Three other elected County officers were also sworn in to start their new terms, including Matt May as assessor, Lisa Cardello-Presto as auditor, and Karen Adams as treasurer.

In keeping with the special occasion, a number of County employees received distinctions for their long careers, including three 25-year veterans. Delilah Garza of Behavioral Health, Anita Richards of Public Health and Mary Straughter-Eguia of Juvenile Hall were singled out for their record of public service.

Garza has worked in a variety of roles in Merced, including as a social worker within the Adult and Aging Services Division where she spent 20 years. She was recognized for her mentorship of interns in Adult Protective Services.

“I am both humbled and grateful for the opportunities that have been afforded to me,” Garza said before thanking her family and coworkers.

Richards started working for Merced in 1996 as a community health aide in the HIV program. She was instrumental in promoting dental health and children’s wellness exams in migrant camps. She discovered lead poisoning in families of automotive workers working on radiators containing lead, work which was acknowledged by the California Lead Poisoning Prevention Program.

“25 years! I’m happy that I’ve had the opportunities… to push me forward,” Richards said. “I’ve had good leadership. I love my job and I love my families. They are everything to me.”

Straughter-Eguia handles administrative tasks and mentors new staff. She was awarded Supervisor of the Year by the California Association of Probation Institutes Administrators last year.  She teared up as deputy chief probation officer Lisa Maples thanked her for her hard work.

“Mary possesses the qualities of a great leader and she is highly respected by members of the department given her knowledge of probation and the criminal justice system as a whole,” said Maples.

Julie Gillis of juvenile hall, Brenda Mojica of retirement and Katharine Abbot of animal services were also recognized. Gillis for 15 years with the County, and Mojica and Abbot for their 20 years of service.