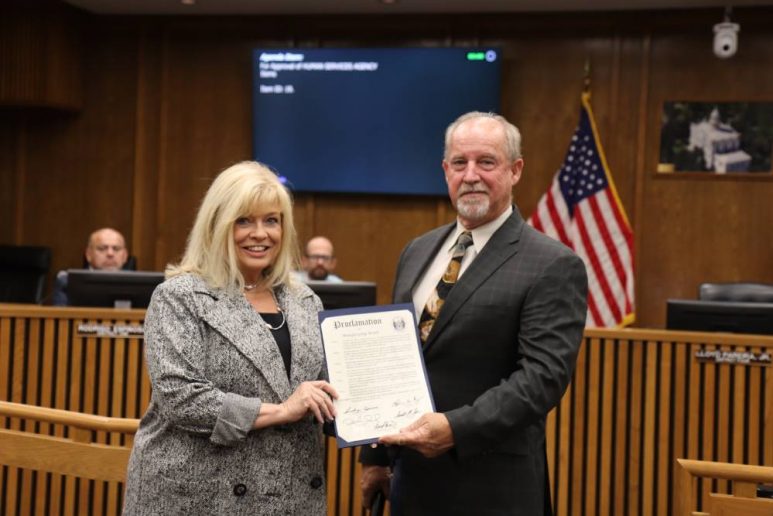 Maryn Pitt of the  Manufacturer’s Council of the Central Valley. 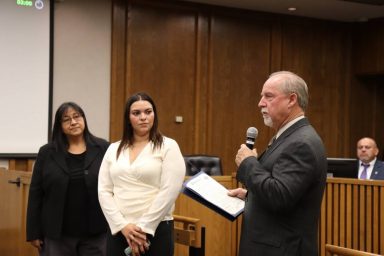 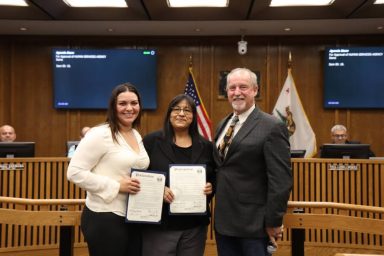 It was a celebration of weeks and months at the Merced County Board of Supervisors on Tuesday as several local groups were recognized for their hard work on a variety of issues from youth development to domestic violence.

“These are folks that need help,” said Supervisor Lloyd Pareira. “It’s also valuable to the rest of us. Anybody could be in those circumstances at any given time.”

Lupe Garcia, program director for Valley Crisis Center, said that the Center helps around 900 survivors of domestic violence each year. The Center offers emergency shelter to victims as well as counseling services and support groups among other things.

“I know that many of you may not have been victims of violent crime. However you know someone who has been, even if they haven’t disclosed to you that they have been a victim of a violent crime,” said Lisa DeSantis, Victim Witness Program Director in the District Attorney’s office.

“I can’t say thank you enough,” DeSantis said. “We are there for any questions that you might have, for yourself or on behalf of someone you might know.”

The roots of the awareness campaign started in 1987, when the month was first recognized nationally. It was started in order to connect victims and survivors with organizations and to raise awareness of the problem.

Supervisors also acknowledged the efforts of 4H in helping educate youth on leadership and service. This week of October was named 4H Week.

“Many of us went through the 4H program. Those projects teach kids how to be responsible, how to care and how to have empathy for something else. They learn to think outside themselves,” Pareira said.

The local Merced 4H is an operation of UC Merced, organized under the Cooperative Extension program of the National Institute for Food and Agriculture. There are over a dozen 4H clubs in Merced County, offering kids the chance to learn skills ranging from caring for livestock to sewing and arts and crafts.

“Because we are under the umbrella of the UC locally… we are constantly delivering positive youth development,” said Jose Campos, program director of Merced 4H. “Our program is basically led by adult volunteers. Adult volunteers have a passion to give back to the community. Give back to our youth and provide them with that confidence and an explanation of their potential.”

“That is our mission,” he said. “To constantly engage our youth in something positive.”

Supervisors declared October Manufacturing Month in order to bring awareness to the role manufacturing plays in the local economy.

The proclamation was made alongside Maryn Pitt, executive director of the Manufacturer’s Council of the Central Valley. The group was founded 31 years ago and represents the interests of manufacturers in Stanislaus, Merced and San Joaquin countries from its headquarters in Modesto.

Most of the industry in the Valley centers around agriculture, but there are also sizable operations producing plastics, packaging and petroleum products as well, Pitt said. According to the industry, local manufacturing contributes $3 to the local economy for every $1 spent in the industry.

Work on Bear Creek intensifies before next storm