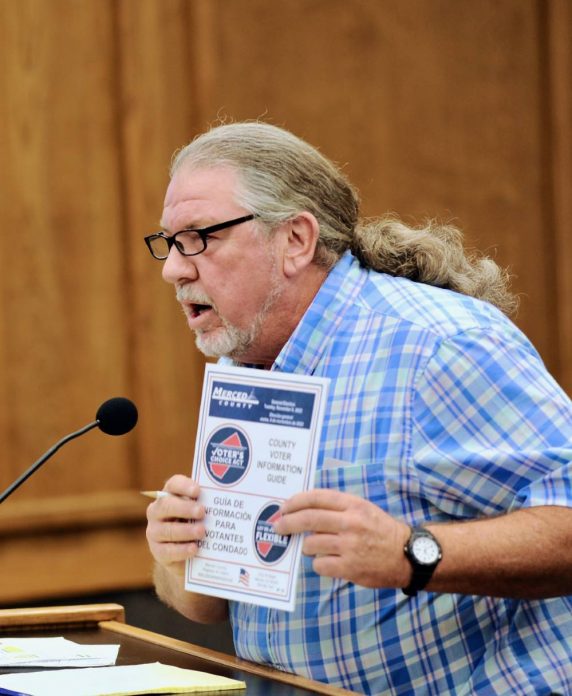 Casey Steed, a candidate for the District 4 seat on the Merced City Council, expressed his frustrations to County Supervisors regarding the recent ballot errors that saw the County Elections Office mail out ballots to voters that were missing a number of candidates’ names, including his own. 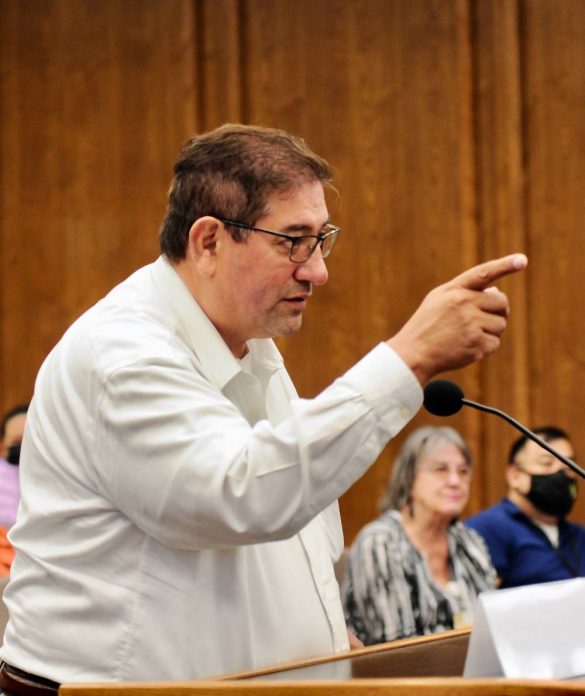 Merced City Council hopeful Javier Fuentes spoke during the Board of Superviors on Tuesday about the recent ballot error that came to light as the County Elections Office mailed out ballots to residents that did not include his name as a candidate for the District 4 election.

The controversy over incorrect mail-in ballots has finally reached the Merced County’s elected officials, who called Tuesday for an outside investigation into what went wrong.

Last week, more than 4,100 voters in Atwater, Gustine, Merced, Los Banos and Santa Nella received mail-in ballots with the wrong information. The worst came in the form of errors in ballots delivered to residents of Merced’s 4th and 6th City Council districts, the site of two hotly contested local races.

Some District 4 voters opened their ballots only to see candidates who were actually running for District 6, and vice versa.

According to the county, the mistakes were the result of human error after both District 4 and 6 were the subject of redistricting and their boundaries had been redrawn. District 4 – stretching roughly a mile around Rahilly Park in all directions – lost its neighborhoods south of Bear Creek and gained a chunk of suburbs near Merced College that had previously fallen in District 6.

Both the City of Merced and Merced County governments went through the months-long redistricting process to redraw representative districts across the region in late 2021 and early 2022 before the June Primary vote. Several public meetings were held and they involved citizens who submitted map proposals. The local media reported on the final maps that were approved, and those maps were available for viewing on local government websites.

At Tuesday’s Board of Supervisors meeting, it was up to County Executive Officer Raul Lomeli Mendez to explain what happened as mail-in ballots were drafted in the lead up to the Nov. 8 General Election.

“Following the redistricting process, there were some complications adjusting the lines that separate voting precincts in Merced County,” Mendez said.

“We – I – failed Merced County residents,” he said. “This appears to be a human error affecting random precincts around the county, affecting both candidates and ballot measures. Moving forward, we’ll be working on identifying the issues that led to these mistakes and developing an action plan to limit and eliminate future errors of this nature.”

Corrected ballots were printed out over the weekend and mailed out on Monday only to the voters affected. The county said they will also send affected voters a letter with instructions in both English and Spanish, as well as contact them by phone and email if they have that information on record.

Mendez also addressed public confusion over what would happen to the incorrect ballots, reiterating the decision by elections officials to continue to accept them but with caveats.

“In the event that a voter returns an original ballot containing errors and does not return an updated ballot, only the races pertaining to the district he or she resides in will be counted,” Mendez said. “The entire ballot will not be voided. Also, no votes will be counted twice. We have systems in place to ensure that.”

If an incorrect ballot is returned, Mendez said, elections officials will reach out to the voter in question in order to help them return a correct one before the end of voting at 8 p.m. on Election Day. Corrected ballots will have a number 2 on the outside of the mail-in envelope to identify them.

Mendez’ acceptance of responsibility was not enough to soothe a few members of the public who were in attendance, however. A statement posted to the County’s official Facebook page last Friday garnered more than a hundred comments, most of them negative. There was also a protest outside of the County Administration Building on the same day, where Fue Xiong, a candidate running for District 6, called for transparency from officials.

The bulk of the fury at Tuesday’s meeting came from the political candidates themselves. Two of the candidates for District 4 – Casey Steed and Javier Fuentes – appeared at the meeting in protest.

“People are being disenfranchised. How did this happen? Why was it allowed to happen and why did it go on so long?” asked Steed. “The citizens of this county have been done a disservice. It’s your job to fix. This has caused grievous harm to this process. This election will have a stench on it unless it’s resolved appropriately.”

“We need to recognize that there has been permanent damage to our democracy,” Fuentes said. “The damage has resulted, I believe, in voter suppression.”

As of press time, there has been no evidence presented by either the political candidates or county officials to support accusations of disenfranchisement or voter suppression. Disenfranchisement is a specific term used to describe depriving citizens of their legal right to vote, while voter suppression are tactics typically employed by political groups to make it harder for their opponents to vote. Both usually involve some sort of intent to stop people from voting, and so far there has been no evidence presented that would indicate the ballot problems in Merced County were made intentionally for political purposes. Even if the affected voters returned an original ballot, they will have the option to return a corrected one if they choose, provided the county follows through with its promise. And there is still the option of voting in person, which is still a week and a half away.

But the lack of information hasn’t helped ease any suspicion. The county has been tight-lipped about the specifics of who made the mistake and how, most likely due to a growing consensus that a third-party investigation is needed. Mendez said an internal investigation is already underway, and that he would release more information in the future. He didn’t say when that would be, however.

County Supervisors were not in the mood for defending the elections department or its leader, Registrar Darlene Ingersoll, who is overseeing her first general election since being named to the position officially. They said they were tired of fielding calls from confused constituents, and wasted no time calling for an outside investigation.

“For the sake of the folks and the integrity of this election, I’d like to call for a third party investigation,” said Supervisor Daron McDaniel. “I want to know who, when, and why, and if there was any intent.”

“I fully understand that there are folks out there that think that there’s conspiracy theories going on and that this was done intentionally and that we’re disenfranchising voters,” said Supervisor Silveira. “My ask to the public is, we are doing our very best to get information out to you on how we’re gonna rectify this problem that we have found.”

“Errors are made, employees make errors… That’s why [Ingersoll] is in charge of them, right? We should not be taking the fault for it as board supervisors,” said Supervisor Rodrigo Espinoza.