Council candidates speak out at forum 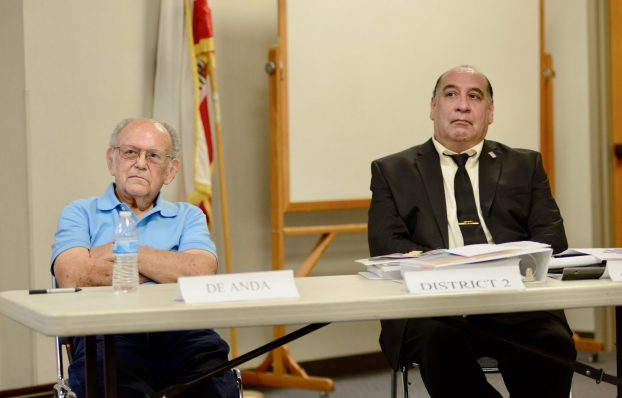 District 2 candidates, Ronnie De Anda and Fernando Echevarria, listen to a speaker during the campaign forum. 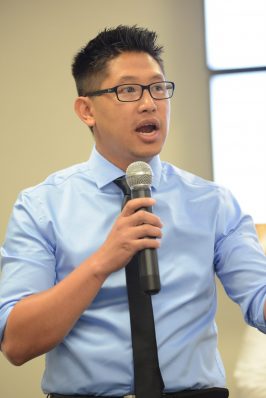 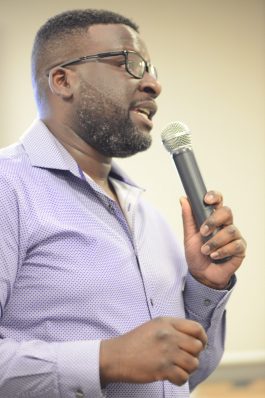 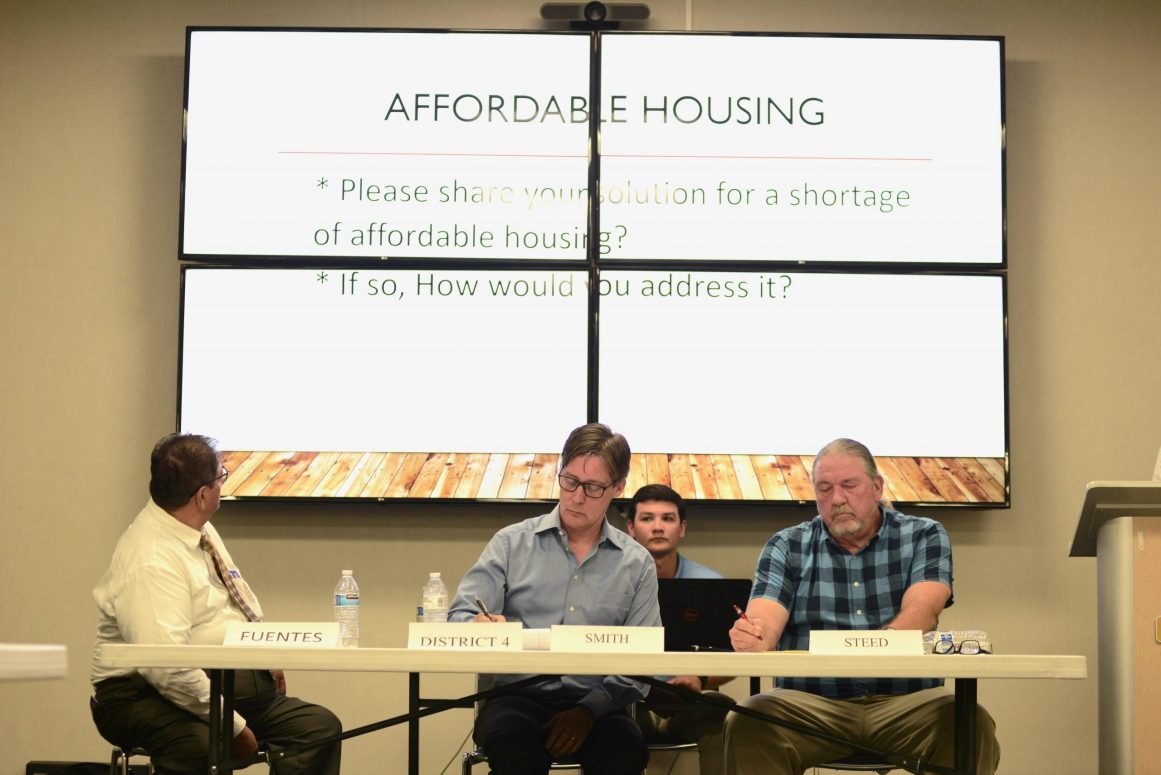 Candidates for the open District 4 seat on the Merced City Council ponder a question about affordable housing during an election forum on Tuesday night organized by local members of the Asian Pacific Islander American Public Affairs Association.

The final stretch of Election 2022 is upon us, and local candidates are ramping up their public appearances in the attempt to garner the most possible votes in their respective races.

On Tuesday night at City Hall, candidates for seats on the Merced City Council gathered to express their views during an election forum organized by local members of the Asian Pacific Islander American Public Affairs Association (APAPA).

The APAPA mission is to advance its communities through increased civic engagement and leadership, and they certainly were able to fill up the Sam Pipes Room with interested voters.

Among the top issues candidates were asked to opine on were: the city’s Public Safety needs, solutions to Affordable Housing, and simply why they were running for office.

“I’m running for this seat because I am unhappy with the representation we are getting,” said Ronnie De Anda, a candidate for the District 2 seat representing about half of south Merced. “I’m not very happy at all. I’m not going to make anybody any promises. I never have… But I will work the hardest I possibly can so that you can get the representation that you deserve.”

His opponent, incumbent Councilman Fernando Echevarria, said: “Why am I running? It’s my destiny. This is exactly what my destiny is, and will continue to be. As an incumbent, overseeing $844.8 million, obviously you are going to get some criticism. But we are moving forward. We are moving forward to have different components of Measure C that are addressing our community, not lining police officers pockets at the expense of south Merced.”

Measure C is an existing half-cent sales tax that supports the city’s Police and Fire Departments. It’s set to expire in 2026, and earlier this year, a failed effort to put an extension proposal on the ballot for voters to decide on drew lots of citywide attention and controversy.

The subject fired up Delray Shelton, a City Council member and District 6 candidate. He passionately told the audience: “When Measure C was turned down, it wasn’t because the people were duped. The people were prevented from being able to decide on it… And so the power was taken out of your hands as a community. Democracy was not served. In fact, I always tell people, it’s really a matter of how much you love yourself, and how much you love community. Because maybe you won’t need public safety one day, but the people who live next door to you, across the street, or on the other side of town, will. And it’s imperative that we have competent well-trained men and women who have the very best equipment, that when someone picks up the phone and dials 911, that they come and render aid and serve you in whatever capacity that is needed. You can’t say that you love people, and you can’t say that you love community, and you won’t support public safety. This community is going to be in a very bad way here in a couple years if we don’t get it. Thirty people will be laid off in one day. The City Manager will serve 30 people with walking papers — and that is your safety and that is your kids safety.”

“I opposed Measure C,” he told the audience. “Why? Because it was not done honestly. There was a lack of integrity. There was a lack of transparency. We were lied to about the date of when that ballot measure had to be proposed over to the county… The survey was false. The survey did not accurately represent everybody who lives here in Merced. It disproportionally left out south Merced. And so when we are trying to have something here with Measure C, it needs to represent everybody, and be done right.”

Shane Smith, one of three candidates in the District 4 race, left some remarkable words on the subject for people to consider.

“I believe that residents of Merced want a robust, well-trained, professional and accountable Police Department and Fire Department,” he said. “When I hear about the discussion about Measure C, it’s kinda like members of our current City Council don’t understand the interplay between budgeting and cash flow versus staffing. Or maybe they do. The decision to not put Measure C in your hands has already made you less safe. Why? Because our firefighters and police officers are already wondering if they are going to have a job next year or the year after… The next City Council needs to address that immediately. And if it won’t, we need to go to the voters to deal with this problem.”

Said Steed: “Affordable housing has many definitions, we could probably get a hundred in this room… We have a lot of development going on in Merced. We are pretty well pre-annexed out to La Paloma Road by the lake. We have struggled to put affordable housing options on line. One thing I think about is variety — a mixture of housing options, whether it be apartments, condominiums, single-family residences, duplexes. All of it needs to be on the board. The city needs to be receptive to the permitting process. There has been a lot movement at the state level for density bonuses — things that encourage developers to build more affordable housing or below market-rate housing for those communities who can’t afford market-rate housing… The solution is we have to increase the inventory, and we have to realize that we work in a capitalist system. We have to have the builders participate in this. I don’t think we should do things like inclusionary zoning that would have a stifling effect on the production of affordable housing.

In his turn, Fuentes said, “We need to come together as a community and address the issue with different perspectives. If you own property, and you are paying X amount of dollars for your house to the bank, and you are renting the house for less than what you are paying the bank, that becomes an issue… I am for affordable housing, and I am very much interested in all of us sharing in this not-American dream. A lot of people say the American dream. I believe that it is the human dream. Everybody wants to own a home. Everybody wants safe neighborhoods. Around the world, ask anybody if they don’t want the same thing that we want.”

Local election ballots are going to start reaching the mailboxes of registered voters on the week of Oct. 10. The General Election is set for Nov. 8. The Times will be there every step of the way. Don’t miss our Election Special in the Oct. 27 edition. Stay tuned!