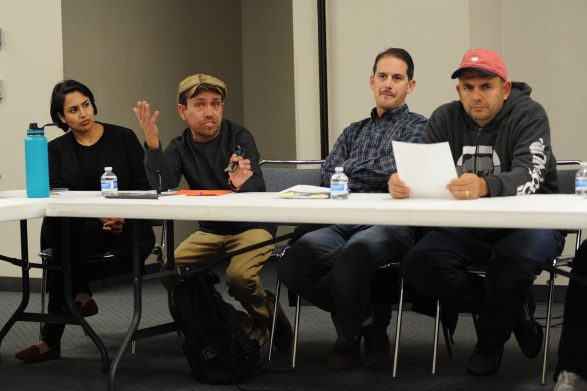 Members of Merced’s soccer community discuss what’s needed to really boost the quality of facilities for the growing sport in town. 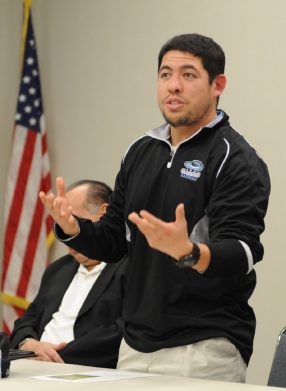 Councilman Anthony Martinez stressed that the planning for new soccer fields will be a learning process, but one that will greatly benefit the south Merced region. 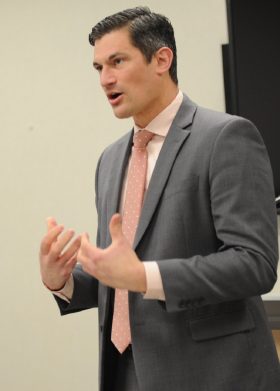 Councilman Matthew Serratto thanks those in attendance and urges continued participation in the planning for a new soccer complex in south Merced. 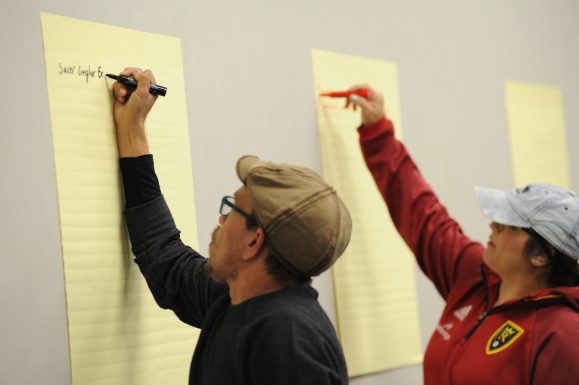 Meeting participants were asked to jot down ideas on what is needed at a proposed new park / soccer complex in south Merced. 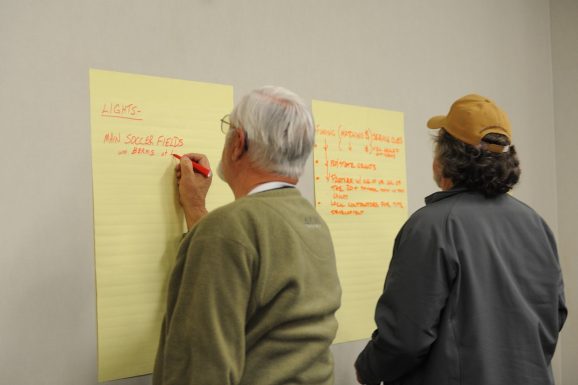 Youth sports advocate Dave Nannini and local radio talk show host Casey Steed express their ideas on planning sheets. Nannini, who was involved with the planning of the original Sports Complex in south Merced back in the early 1990s, called for the soccer fields to be constructed with berms along the sidelines for people to sit and watch the games. Steed noted the need for funding streams involving local service clubs, state and federal grants, and promised parks and recreation revenue from local cannabis shops.

Soccer draws a great deal of attention because it is a fast growing sport in the country, and the demand is placing a need for more fields in Merced.

There is a 38-acre site in south Merced, located at Tyler and Mission Avenues, that the city purchased in 2007. Originally intended for a joint-use soccer/sports complex with the Merced Union High School District, those plans changed when the district built El Capitan High School in North Merced.

Some 30 residents showed up at City Hall on Monday night to offer ideas on what to do with the site, and how to add more soccer fields for the growing numbers of soccer players.

The meeting was initiated by Mayor Pro Tem Matthew Serratto, and he was present, along with soccer committee members, Councilmen Anthony Martinez and Fernando Echevarria.

City Manager Steve Carrigan and Assistant City Manager Stephanie Dietz thanked those who showed up and urged residents to express their ideas and come up with a unified voice so that the project could be successful.

They said this week’s brainstorming session would be turned into an updated city staff plan, followed by another community meeting in about a month. With a solid vision in place, a proposal would later be sent to the Merced City Council for direction. Then the idea is to create a community campaign for the project, and start to seek fundraising opportunities, as well as state and federal grants that are available for parks and recreation.

Among the many ideas brought up at the meeting were: