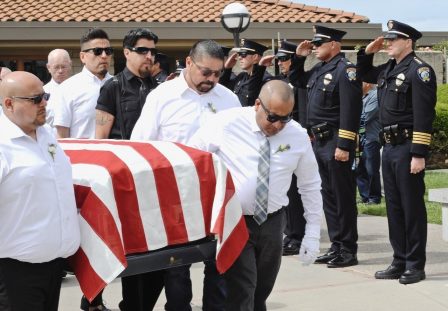 Joe Cortez’ casket is carried past officers of the Merced Police Department, including Chief Chris Goodwin, at right, after a funeral Mass at St. Patrick’s Church. 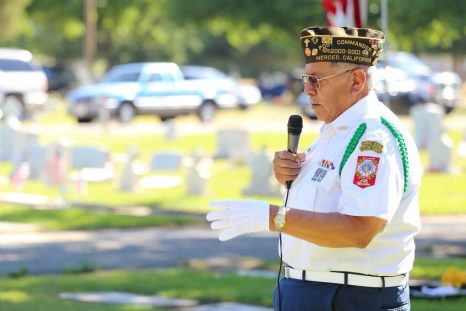 Joe Cortez speaks during a Memorial Day ceremony at Calvary Cemetery in Merced. 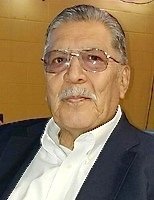 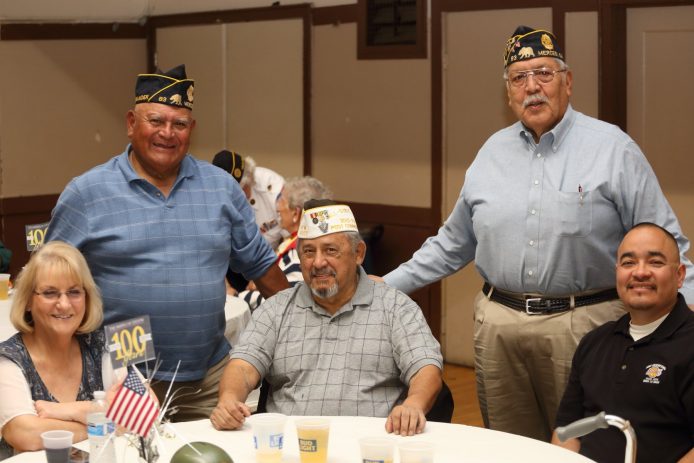 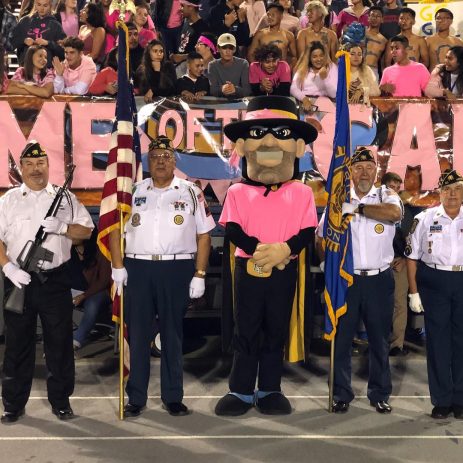 Joe Cortez, second from left, stands with the Color Guard during a sporting event for El Capitan High School.

There was a heart-wrenching, somber and unavoidable realization in the air this week as the Honor Guard fired three volleys from their rifles, and the bugler played Taps.

Cortez passed away more than a week ago as he continued to serve the Merced community through the American Legion and the Veterans of Foreign Wars.

His smile was contagious, and he will be missed by many Mercedians of diverse ages and backgrounds.

Cortez was the big, strong, nice guy who kept service to country dear to his heart while helping to improve his hometown that is both challenged and blessed by growth and great cultural diversity.

“Joe had great compassion, and he would work with residents to solve problems, but on the other side, he was tough as nails,” recalled former Police Chief Tony Dossetti. “Joe was always looking out for everyone, and he was respected for that, and so we also looked out for Joe. We were a pretty close-knit family.”

Dossetti and Cortez both served as police commanders under Chief Pat Lunney. The two career lawmen also helped open two substations in town as the department grew in the mid-1990s — with Cortez heading up the one in South Merced.

The two would later serve on the Merced City Council. Cortez enjoyed broad community support and remained on the council for two consecutive terms. Later, he reportedly was asked by a variety of influential Mercedians to run for mayor, but he declined, opting to concentrate on family, friendships and local veteran affairs.

“He is the type of community member that we should all try to be,” said Hub Walsh, who served on the council with Cortez. “He also had a tremendous sense of humor. It was sort of self deprecating humor that put people at ease. And he was a great storyteller.”
Walsh noted that it was always Cortez who would remind local leaders and the media about events for veterans, including for Memorial Day.

The big Memorial Day observance in Merced is held at the District Cemetery. However, it was Cortez — and the other “Joe” (local veteran Joe Vasquez)  — who realized some years ago that there should be another Honor Guard ceremony at Calvary Cemetery where many veterans are buried. So they started an early-morning observance on Memorial Day that continues to present.

And it’s no surprise that Cortez was buried at Calvary on Monday.

Vasquez told the Times it will never be the same “without Joe.”

An employee at Ivers and Acorn Funeral Home told the Times he was stunned when he heard about Cortez’ passing.

“Our Joe?” he reacted to the news.

Cortez had served on the VFW and American Legion Honor Guards for hundreds and hundreds of funeral and burial proceedings, and also worked part-time over the years for Ivers and Acorn.

Joesph Cortez was the third of six children born to Anticeto & Josephine (Mendoza) Cortez, in Merced.

He attended local schools and some college before joining the Army where he was stationed in Germany. After leaving the military, he embarked on a career with the Merced Police Department that would span 32 years. He started as a patrolman, working his way up to Detective, Sergeant and then was appointed Commander. He was also a S.W.A.T. team Commander/Negotiator and a graduate from the FBI Academy in Quantico, Virginia.

After he retired from the Police Department, he was elected as a Merced City Councilman and served two consecutive terms.

Cortez was also very active with the American Legion and the VFW, serving as a past Post Commander. He was also in many other clubs and organizations through the years such as Club Mercedes, the Boys and Girls Club and Kiwanis. He was an active participant with the Honor Guard, and also spent many hours hand making and painting crosses to be placed at local cemeteries for Memorial Day honors and acted as Master of Ceremonies at the yearly event. Cortez has also been a familiar face in the community working at Ivers and Alcorn Funeral Home for the past 20 years.

He enjoyed coffee with the boys at Country Waffles and Paul’s Place and hanging out with Joe V. at local football games and the Legion. He also had fond memories of the many unforgettable family trips he took to Pismo. Joe loved his family unconditionally. He also loved his community and was proud to call Merced his home. He regularly attended Sacred Heart Church, the same church in which he was baptized.

He is preceded in passing by his parents, brother’s Cheto, Jesse and Henry, and his son Steven. He is survived by Carol, his wife of 52 years, daughters Regina and Sonja, daughter-in-law Tammy, grandchildren Laina, Amanda and Guy, great grandson Zam, sister Maria and brother Joaquin (Sally), sister-in-laws Mary Lou and Clem, his four god children, and numerous nephews and nieces.

Joe was a humble, honorable and selfless man, and we will miss him dearly.