Communities Unite In Wake Of Storms 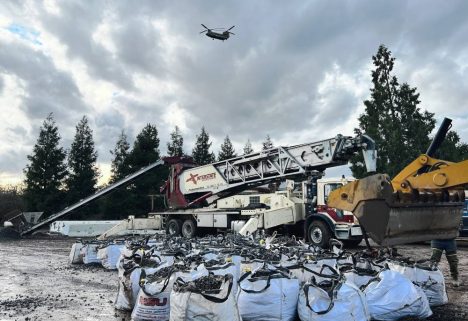 MERCED COUNTY SHERIFF’S OFFICE – A California National Guard Chinook helicopter from the 40th Combat Aviation Brigade (hovering above in photo) was brought in to assist in repairing a large break along Bear Creek near McSwain. Crews worked late into the night to help repair over 160 feet of broken levee. Cen Cal Trucking, Brisco Construction, and other local firms, supplied equipment and workers throughout the operation. 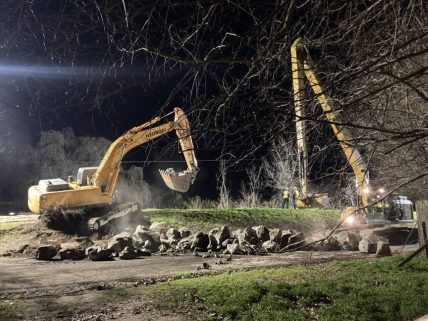 PHOTO BY SKIP JOHNSON – During the heavy rainfall, Merced city workers supported by local partners worked all day and into the night transporting and positioning huge boulders to reinforce vulnerable sections of Bear Creek within the city limits. 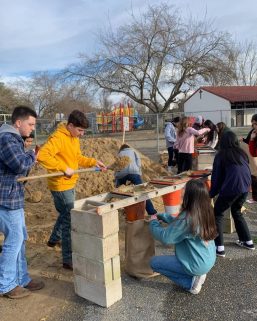 OUR LADY OF MERCY SCHOOL – For several days, young students at Our Lady of Mercy School in Merced helped fill and distribute sandbags for local residents in need. They created a fast-moving production line by using street traffic cones to help fill the bags.

MERCED COUNTY SHERIFF’S OFFICE – California Governor Gavin Newsom visited Planada and walked through the streets to see how residents were impacted by the severe flood waters. Merced County Undersheriff Corey Gibson explained to the governor about how the local community has rallied around those affected by this disaster.

While residents witnessed major tragedies in communities across Merced County in recent days, they also shared stories of volunteerism and goodwill as communities came together to restore flood damage and help those who had to flee their homes.

Good news came Tuesday, when Sheriff Vern Warnke lifted the final flood evacuation warnings in the region; however, various road closures remained in place. Meanwhile, road crews kept busy repairing potholes that were opened up by the storms, and drivers were cautioned about the saturated ground leading to dense fog  — making those potholes hard to see.

The Merced County Emergency Operations Center (EOC) remains activated and is now working with Cal OES, FEMA, and other local partnering agencies as they work to provide assistance to affected members of the community. Residents are encouraged to ask any of these representatives for their official badge if they visit a home or a business.

It was announced over the weekend that the White House approved California’s request for a Presidential Major Disaster Declaration, which included Merced County. Assistance can include grants for temporary housing and home repairs, low-cost loans to cover uninsured property losses, and other programs to help individuals and business owners recover from the disaster impacts.

In turn, California Governor Gavin Newsom paid a visit to Planada, one of the hardest-hit areas where flood waters several feet deep rushed into homes as residents fled. Residents and business owners have returned and are starting to rebuild, but they were told not to drink  the water due to containments.

“The best of people come out in these moments,” Governor Newsom said as he walked the streets of Planada and talked to storm victims.

Over in the McSwain area, the Sheriff’s Office, in partnership with Congressman John Duarte, the OES, and County Supervisor Daron McDaniel, helped secure a California National Guard Chinook helicopter from the 40th Combat Aviation Brigade to assist in repairing a large break in Bear Creek. Crews worked long shifts and late into the night to help repair more than 160 feet of broken levee. The break had led to major flooding that flowed west to Persimmon Way, over Highway 140, and into McSwain School.

In Merced, city officials — particularly those in Public Works and the Fire Department — have been breathing a little easier after days on end of trying to keep the city’s drainage systems clear, helping stranded residents, repairing potholes and reinforcing Bear Creek.

Before last weekend’s rain, big tractor-trailers were hauling giant granite boulders and rock filler to vulnerable areas along the creek. Huge cranes were being used to move the boulders in place along the banks, apparently to reinforce them.

One such area was near a bend in Bear Creek, along W Street, between 23rd and 24th streets. That’s about a mile away from all the severe flooding that occurred downstream in the areas of Driftwood Drive, Highway 59, and 16th Street on June 10.

Resident Skip Johnson was pleased by all the public safety attention, including from city, county and even state officials who have visited the site in recent days. He also credits Merced City Engineer Mike Beltran — who has a strong background in civil and geotechnical engineering.

Johnson has been sounding the alarm about this vulnerable stretch of Bear Creek in Merced for years. Six years ago, in 2017, Johnson talked to the Times and showed deterioration in a washed-out area of the very same Bear Creek. The creek was pretty full at the time, and Johnson said he and other residents were worried about a high water event that would cause the banks to fail and flood the neighborhood.

“I’m so proud of everybody,” he told the Times after the storms cleared this week. “They mobilized, they worked 24 hours a day, and they solved the problem. I’m just praying and want to help those resident who were flooded out and still need help.

Multiple local, state, and federal agencies are available to assist Merced County residents impacted by floods at the Disaster Resource Center in Merced.

Located at the Yosemite Building of the Merced County Fairgrounds (900 Martin Luther King Jr. Way, 95341) the site will remain open through Jan. 25, from 9 a.m. to 5 p.m., including Saturday and Sunday. FEMA will be available at the site from 7 a.m. until 7 p.m. on a daily basis.

Services are available in both English and Spanish.

The Bus has added the Merced County Fairgrounds as a drop off location on Planada routes.

Additionally, the County is in the process of coordinating additional assistance sites with Cal OES and FEMA. More information on these sites will be available soon. Disaster Survivor Assistance Specialists able to assist with registration are currently located at the Planada Community Center, along with local support agencies.

Types of resources available at the Disaster Resource Center include:

A flood victim donation center has been located at the Merced City Senior Center at 755 W. 15th St. in Merced. It will be open through Saturday from 9 a.m. to 5 p.m.

The donation center is not accepting used clothing, towels, blankets, pillows, or sheets.

Additionally, monetary donations can be made through the United Way of Merced County by calling 209-383-4242 or visiting www.unitedwaymerced.org

Monetary donations can also be made to the Red Cross by calling 1-800-HELP-NOW or visiting www.redcross.org