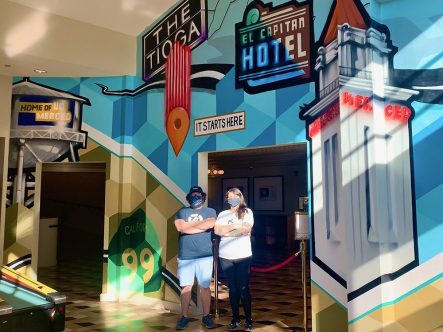 Artists Eddie O. Rodriguez and Patricia Pratt stand under the new mural inside the future game room of The Mainzer restaurant and entertainment center. 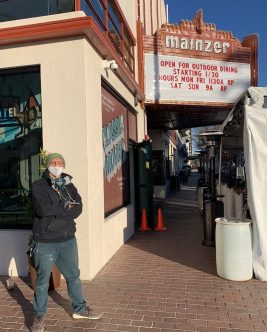 Artist Erik Gonzalez traveled from Seattle all the way to Merced to help his good friend Patricia Pratt with the mural. 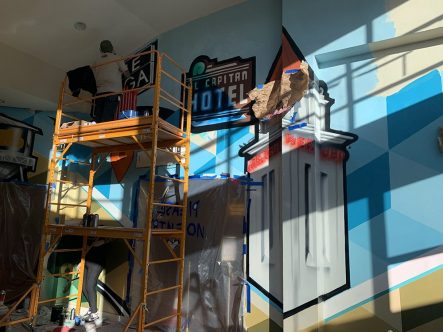 The Mainzer’s game room will consist of several skee ball machines and huge wooden and magnetic wall games for guests to play with.

The Mainzer restaurant and entertainment center, located downtown at 655 W Main St, is gearing up to open a new game room.

Huge wooden and magnetic wall games, skee ball machines, and a newly completed mural commissioned by local artist Patricia Pratt will be at the center of the new room that is set to enhance the dining experience for all who decide to engage.

NINE dot Arts, an art company out of Colorado, is in charge of curating all the ambiance for the development. In late December, the company reached out to several local artists in an effort to commission a local artist for the wall artwork that would represent Merced. At the end of their search, Pratt was hired to bring their vision to life.

“When they initially asked for the design, they wanted something that would appeal to anyone in Merced,” Pratt explained. “I took iconic themes from around town, not just this development or just the downtown area, so that no matter which side of town you live in — or if you’re a visitor — the mural is going to be recognizable to you.”

Pratt is known for her numerous murals in and around Merced, her art studio and downtown shop Kreepy Kawaii, and for her role at Urbanistas Collective, a group set on serving its community members through art and social change.

She serves on the city’s Arts and Culture Advisory Commission, and has been at the forefront of advocating for more community art in Merced. The mural at Mainzer is only a scratch at the surface of mural projects Pratt has scheduled for 2021.

The Merced mural she created at Mainzer covers an entire wall of the game room. Iconic structures, themes, and signs from all across Merced are mapped out across the wall in accurate direction and location. The UC Merced water tower, Highway 99, Merced Tower, Tioga sign, the original El Capitan Hotel sign, and a flying heron, are represented throughout the mural.

At the center of it all, a bright orange and red checkpoint stands, marking you at the Mainzer restaurant, with a sign stating, “It Starts Here.”

Over a seven-day period, the mural was brought to life with the help of artist friends, Eddie O. Rodriguez and Erik Gonzalez.

Gonzalez, the founder of Urbanistas Collective currently lives in Seattle, Washington, and made his way down to Merced solely to help collaborate on the mural his good friend Patty was beginning.

“She reached out to me and I saw it as a good opportunity to come out and have some fun,” Gonzalez explained. “Patty designed everything, she set it all up and I was here to help with anything she needed.”

Originally from Visalia, Gonzalez had made only one other trip to Merced while he lived in California.

“It’s really dope here,” he said. “This is only my second trip to Merced, and I regret not coming here sooner. I really dig the architecture downtown. I think there is something really special going on here.”

Eddie O. Rodriguez also serves on the Arts and Culture Advisory Commission and has had his paintings shown and taught art in different areas around the world.

“At the end of it all, I feel so grateful and fortunate,” Rodriguez said. “I had been wanting to meet Erik for a long time and I thought I was going to have to fly to Seattle just to meet him. When Patty told me he was going to be in town, I immediately thought, here is my chance.”

“In general, the mural culture here has become, if a friend of ours is working on a project, we go to hang out, and if we can help a little bit, we will. That’s how I did it here. I wasn’t expecting to be part of the project… at some point Patty asked me to help out and I was happy to join.”

At the end of it all, a collaborative effort has successfully created a beautiful and colorful mural inside one of Merced’s newest downtown restaurants. The mural will be open for viewing as soon as the game room is finished.